There are voices calling from the trees.  One of them is hers.

It’s hot. Our sheets smell of nightsweat. Her skin is damp and tastes of salt. She stretches out, naked, every hair visible in the hyper-real white light.

“Maybe we should go for a walk. In the woods? They’re right outside.”

I laugh at her. “Cool breezes,” I say. “Dappled sunlight. Mossy clearings.”

“Darkness,” she says. “Darkness and whispers in the leaves.”

She shakes her head.

The woods come up to our bedroom window. When the branches tap on the glass at night, she gets up and presses herself against it.

“Why are you always watching them?

Her hair is long. It’s never been cut. Her skin is pale. She has unshaven legs and underarms and pubes. She wears her mother’s old dresses and they go see-through in the golden light.

She owns mirrors but she never looks in them. She says they only show ghosts.

The house sits in a large clearing in the woods. Inside is faded wallpaper and tattered curtains. The furniture is ancient and falling apart. She inhabits the house and only the house.

There is one road out. It’s dusty and cracked. It’s been a long time since workmen came here laying new tarmac.

At the end of the road sits the village and the village shop. I walk there every day and bring back the things we need. They only speak to me to give me prices and ask if I want a bag. I’m a newcomer.

“How did you survive before I came?” I’m joking. She takes it seriously, as she does everything.

She looks out of the kitchen window at the trees.

Me? I came to deliver a chair.

She waited until someone came with food and opened the door a tiny crack. She told them she needed a chair and asked them could they get her one? She handed them a wedge of money.

I came to deliver it, and she was so strange and so beautiful and seemed so lonely.  I assumed she had agoraphobia. I stayed for a cup of tea. She made it with a kind of shy pride.

The cups were cracked and dirty.

Her hair was long down her back and I thought of fairytales. I wanted to ask her to let down her hair, but it was already down and I thought she might not understand. She had a way of not understanding, of looking at you with wide, uncomprehending eyes that made you feel large and stupid. It made her look very young, although she was well past thirty.

I gave her my number and email and Facebook and all those things and she smiled and said that she had none of them and could she have my address? To write me a letter?

I gave it to her, charmed that such a thing was still done somewhere.

She sent me letters. I sent them back. We fell in love.

I think we did, at least. It can’t all have been duty.

Her parents taught her about duty in the attic. They opened the windows wide so the pollen could float in on the breeze. Once she breathed it into her lungs, they said, she could never leave. She had a choice.

“There’s always a choice,” she says, when she tells me this. “But sometimes it’s not a good one.”

She could choose to watch the forest for the rest of her life, or leave the house and let the forest grow till there was nothing else.

“How can one woman stop a forest from spreading?” I ask. She sighs.

The things I loved her for were the things that would embarrass me if she ever met my friends.

Imagine her in her tatty dresses, walking around on her hairy legs like they were no big deal. Imagine her meeting my friends and their polished girlfriends. Imagine her going into big, loud, brash places and listening to people talk about football and politics.

It made hot poison flow in my veins.

Not because I was ashamed of her, but because my friends would laugh at her and then something would be tarnished.

I wasn’t ashamed of her. But as she was, she would have brought me shame.

Once, she told me that she was glad I came along, because she had no idea what she would do if I hadn’t.

“There’s only so much time in a life,” she said, “and someone has to be here to watch the trees.”

This is a prison.

I will break her free. Sell the house to developers, let them tear it down and build nice, safe concrete boxes so that she can leave, go outside, get some colour in her face and a haircut and proper, modern clothes.

“They’d tear up the forest and pour concrete on the roots. That would stop anything spreading.”

In my idle daydreams I think of burning the house down.

Sometimes I find her sitting at windows at night, watching the branches move in the wind. She whispers under her breath.

“It’s just a forest! It’s just a bunch of trees! They grow, they die, like all the forests in the world!”

“No,” She is pressed up to the window, watching the sun move behind the trees. Her eyes are huge and dark and dilated. “No. Nothing dies in there. Nothing changes. It’s the same trees. They’ve been the same trees for centuries.”

She breathes on the window and in the cloud left by her breath she sketches a tree.

“Sometimes I think they were here before the world.”

Her strangeness chafes and scratches at me. Why can’t she just be normal? We could go on walks in the woods and maybe she’d ask me what bird that was and I’d say I didn’t know.

She’d be happier, I’m sure.

I have dreams. In these dreams, she smiles easily. Her hair is shorter, and bounces around her face like in a shampoo advert. She’s wearing a little makeup, not too much. She wears a green dress and open-toe sandals and her legs are shaved.

She’s a good girlfriend. Not weird.

We talk of mortgages and jobs and sometimes of children.

We talk of children now. They aren’t the talks of my fantasies, where she is soft and kind and accommodating.

“There needs to be a child. Someone needs to watch the trees.”

It makes her cry, and it makes her crawl on me and fuck me while we both cry and it is the worst and the best thing I have ever done.

There’ll be no child, not to grow up like she did, not to creep alone in a dusty house and never leave.

There’s only one way. Show her the fears are baseless, groundless. It’s just a forest.

I wait till a day when the sun brings tears to my eyes and bleaches the sky and turns the soft subtleties of shadow into flat, undeniable reality.

On days like this there is nowhere for superstitions to survive. In the bright white heat, they wither and die.

I’m saving her, I tell myself.

I will save her if I have to force her into the light.

She screams when I do it. She screams and fights and begs. I close my ears and eyes. She’s hysterical, damaged. I’m doing the right thing. I am.

She is so slim. I put her over my shoulder. It’s not hard, even though she kicks. She wails. She tries to talk to me. Her words are lost in the noises she is making.

I lock the door behind me and plant her on the hot soil.

She crouches down and covers her head with her hands.

She is wearing her mother’s old summer dress and it blows around her and the brown hairs on her calves are like the legs of spindly spiders and I want this to be over.

“Look,” I say, “It’s just a wood, just a forest.  We’ll go walking in it. Nothing to fear. And then we can sell this ruin and take you to a city and get you… a life, a normal life, all right?”

I will hollow her out until light can shine through her. She stands up. She puts her hands over her ears. Her face. God, her face. She looks like she’s been gutted. Her eyes are dry.

She gives me one, awful, haunted look and then walks into the forest.

Good. Good, yes? Good. She’s doing it. And she’ll come out in half an hour or an hour with the sunlight on her face and shining in her hair and she’ll be a normal girl.

In the green darkness of the trees, there is laughter.

Is she? Is she laughing?

The laughing rises into the colourless sky. It starts as a low chuckle, then spirals into a shrieking cackle. I cringe away from it. I breathe hard.

I should run in after her. I should save her from the thing laughing like that, even if it’s her. I should. I should be a hero, a white knight.

I stand at the edge of the forest until the laughter stops and then I keep standing there till the sun starts to set and then I sit and I sit till dusk is in the silent air.

Had I never noticed the silence? In a wood, shouldn’t there be birds singing?

And I know that nothing lives in there, that even the trees that grow and the plants that fill the air with fragrance are something other than alive.

She never comes out.

I wait all night but she never comes out.

In the morning, I go down to the village. Or I try. Down the road, the trees seem to be creeping in, moving when I’m not watching them. I run back to the house. I lock the doors behind me.

Two days later, food starts appearing at the doorstep for me. It’s if they knew.

There are voices in the trees. One of them is hers. It’s the only one I long to hear. It asks me to come to her.

I stay in the house.

Someone has to watch the trees. 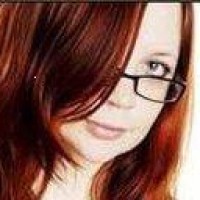 C. B. Blanchard lives and works in the UK, where she makes plans for an apocalyptic future. She writes fantasy and horror and is working on a novel.