Other entries in the series can be found here. Most recently: Sansa/Brienne on Game of Thrones.

Rarely, there comes along a great, well-written show with a central pair of fantastic female protagonists whose love and support for each other is a tentpole of the series (Rizzoli & Isles, Buffy & Willow, Xena & Gabrielle). Then, that show inevitably feels the need to throw in a couple of (fe)male love interests for each woman as if to say, “Hey! Nothing lesbo happening here. At least not between these two!”

That’s exactly what Parks & Recreation did in a swift two-for-one: Ben Wyatt (Adam Scott) and Chris Traeger (Rob Lowe) arrived in Pawnee at the tail end of season two and by season three, they’re macking on Leslie and Ann respectively.

Ann and Chris are now having a baby. Leslie and Ben got married and are blah-blah-blah perfect for each other. But what if Chris and Ben had never stayed in Pawnee? Did Ann and Leslie need these two schmos?

The relationship between civil servant Leslie Knope and nurse Ann Perkins has grown so naturally into one of the best female friendships on TV. Where on 30 Rock, Tina Fey’s Liz Lemon and Jane Krakowski’s Jenna Maroney were “best friends” who barely tolerated each other, Leslie and Ann could hole up for days and never get bored of the other’s company.

Of course, it’s a bummer when people sexualize female friendships just because the women love each other and don’t try to tear each other down at every turn. So it’s gross when lascivious pervs turn a beautiful sisterhood into a porny fantasy, like so.

But in this case, Leslie and Ann really would be better off together, without the doubts Chris puts in Ann and the way Ben tries to rein Leslie in sometimes. Leslie needs someone to support her always, and though Leslie does harp on Ann’s looks, she also encourages her to do better for herself, to think of herself as smart and capable instead of just decorative, and to want the best for their shared small-town life.

Here are some thoughts on Leslie and Ann being in love.

1. “Tragically, we are both heterosexual.”

As Alice from The L Word once put it, “Most girls are straight until they’re not.”

2. They look amazing next to each other.

Ann is all blush and shyness, with her hazel eyes looking into Leslie’s baby blues for guidance. And Leslie is all fair and blonde on top of her. They’d be gorgeous together, a perfect yin and yang.

We get it. You think she’s beautiful, Leslie. Or in an especially revealing instance, you think Ann is “stupid hot.” (But more importantly, you also think she’s brilliant and have so much unflinching confidence in her abilities and expertise.)

4. The way they look at each other

Like they’re so, so proud of their baby and can’t believe the other one is really this awesome and kick-ass.

Can you just imagine them spooning after a long day of government work? Ann would be sprawled on the couch, her head in Leslie’s lap while Leslie strokes her hair and they watch old episodes of The Mary Tyler Moore Show and eat night-time waffles. And then Ann would look up and smile softly and Leslie would be like, “What?” and Ann would say, “Nothing. Just you.” And Leslie would grin really wide and tickle her a little and they’d shift and snuggle sitting up with Leslie’s head on Ann’s shoulder, and Ann would say, “You’re amazing at what you do and I’m sorry today was hard” and Leslie would really, really appreciate it.

6. So much mutual support

They each genuinely and unselfishly want the best for the other. There’s no better foundation for a relationship than a friendship with this much trust, devotion, and love.

7. Leslie loves Ann more than any lame-o guy she’s put up with

Maybe Ann can’t find love because Leslie is her lobster.

Look how eager Leslie is to show Ann off. They look like the best local government lesbian power couple Indiana has ever seen.

9. They get each other’s crazy

And they accept and love that about each other. Someone once said, “Love is finding someone whose crazy matches yours,” probably. Ann feeds off Leslie’s enthusiasm and Leslie is tempered by Ann’s logic. They make each other the best version of themselves.

10. They’re already the most important people in each other’s lives

Yes, Leslie loves Ben but Ann was here first — and truthfully, I think if it was The Good Son situation and Leslie had to save one and let the other fall off a cliff, we all know who’d make it back to JJ’s Diner in one piece. (Hint: It ain’t the Human Disaster.)

So there you have it: They find each other physically attractive, are super compatible, and are a better, more supportive match than the male characters they’ve been needlessly paired with.

In conclusion, Ann and Leslie together should be endgame of this show because that’s the relationship that’s been building since the pilot and the one that deserves to be paid off. Galentine’s Day for all! 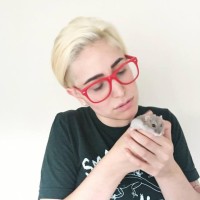 Gaby Dunn is a writer, comedian, and Jesse Eisenberg enthusiast living in Los Angeles. Follow her @gabydunn or on gabydunn.com.