Almost Asatru, or “I was into Loki before he was cool”

Even after shedding the trappings of my childhood religion and becoming functionally atheist, certain events can still inspire religious fear or guilt. For example, not attending sunrise services on Easter will sometimes suckerpunch me with guilt — who am I to buck 2,000 years of tradition just to sleep in? A friend of mine who was raised Jewish feels a constant tension between her actual beliefs and her familial obligations on major holidays.

And then there was the most unexpected jerk back to my childhood beliefs: a video of Tom Hiddleston lashing a crowd into orgasmic screaming while dressed as Loki at Comic-Con.

I didn’t see this happen live–I was miles and days away from the actual event. The darkness was scripted, the beginning of the monologue cribbed from a movie I’d already seen. But when Loki roared “SAY MY NAME!” I felt that same frisson of fear/lust/joy, as if the audience’s ecstatic scream could really summon the god.

I also found myself thinking reflexively, Don’t do it! He’ll fuck with you if you say his name aloud!

When I was a teenager, struggling against my own misanthropy to find out how to actually live with people, I was into Norse mythology the way Tina from Bob’s Burgers was into sex friend fiction. I collected illustrated editions, multiple translations, and eventually delved into the original source material, the Prose and Poetic Eddas. My mom never tried to check my obsession, though she was obviously confused. As for the kids at school, well… reading an Icelandic text on a long-dead religion wasn’t exactly the key to popularity.

Until then, my religious life had been dictated by my grandparents, as my mom lived with them while she put herself through grad school. The result was that I was raised in an uber-conservative pocket of Methodism where I wasn’t allowed to do anything resembling “work” on Sundays (even a sewing project that I was enjoying), and my mom was called in for a parent-teacher conference when I tried to incorporate dinosaurs into drawings of the Garden of Eden. Then, long after we’d moved to our own house and without either of us talking about it, Mom and I agreed that we never had to go to church again unless I wanted to.

This was both an immense relief, as I no longer had to sit through things that I couldn’t ask questions about, and a source of a strange, unsettled feeling, as if I could feel God looking over my shoulder and disapproving over my new path in life. I’d hunch sweatily over the keyboard of the family PC and scroll through websites with red type against black backgrounds, describing modern-day sacrifices to Odin, Loki, and Thor. (Loki, I learned, had a particular interest in Twinkies being burned for him as “sacrifices.”) I was too scared and dreamy to put any of this into practice — I may have, at one point, found a flyer for a local coven at a coffee shop and didn’t go because simply having a paper about a Wiccan meeting was so far away from how I was raised that I thought it would burn me. But I read everything I could find on the 90s version of modern Norse god worship, which was most often filed under “Asatru.”

Re-reading them now, I’m a little horrified at the possible implications of some of the myths I nearly memorized (did Freya really have sex with four dwarves for a necklace, or was she raped?) But I also see why I was attracted to their roughness and weirdness as I struggled to decode what “real life” was outside my grandparent’s house. The Norse gods were far less pretentious than the Christianity I had been raised in, and offered more practical advice: instead of a Ten Commandments, Odin’s Havamal gives a series of aphorisms with tips on how to treat houseguests well, explains what can happen if you drink too much, and warns that staying up all night worrying isn’t the best idea. The gods’ messy love stories and ongoing feuds and alliances with the Frost Giants also was more closely aligned with my confusing world of burgeoning sexuality and hot-and-cold friendships than the Hallmark-card-style advice that I had been given previously. Even as an adult, I still believe that love can be one-sided and coerced, problems can be solved by changing your gender, and you can try your hardest and still not bring the things you love back from the dead.

Among all the Norse gods, Loki was (and still is) my favorite, though I am still sometimes confused by the bug-helmeted Kirby version. (“Vikings” eyeliner-wearing, “slightly manic boatbuilder” Floki is much closer to how I imagine the god.) “Cleverness” is the aspect I feel that most people associate with Loki, but even in the myths he ended up in so many surreal situations involving toxic emotions or failed thefts I find it hard to believe he put much forethought into his life. Instead, I prefer to think of him as the god of “fuck you”s– “Fuck this gender, I can become a mare if I want to” and “Fuck you, Odin, for forgetting I helped make the universe” and “Fuck you, I have monster children.” He was weird and gluttonous and extremely sexual — I learned the word “scrotum” from a retelling of the myth that graphically described how he entertained the gods during a difficult political period between the Aesir and the Frost Giants. I also got in trouble at school for turning in a short story assignment shamelessly cribbed from the myth where Loki turns into a filly, complete with a description of him giving birth to the eight-legged horse Sleipnir.

But ultimately, I abandoned reaching towards Wicca because I felt like I couldn’t trust the gods. Jesus stood between me and the angry God of the Old Testament, but there was no one in the Norse pantheon worth invoking that didn’t have some deeply held resentment in their past. Thor was continuously enraged, Loki was a bitter outcast, and Odin showed such a disturbing singularity of purpose that he was willing to hang himself.

The whole thing gave me the feeling that, if any gods did exist, their powers were too wild and unpredictable for it to be worth invoking them in my daily life. Around this time, I read somewhere about a man who made a pact with the gods that as long as they didn’t bother him, he wouldn’t ask them for help, and I adopted this idea for myself. (Though in hindsight, the chances that a superhuman entity couldn’t find me if it wanted to seemed slim.)

And then the unthinkable happened: the teens of 2012, hungry for more of the story than the Marvel movies could give them, were suddenly reading the same kinds of obscure texts that I’d poured over as a teenager. I felt both vindicated and a little jealous (is this where bitter policing geeks come from?) as people in a fandom I felt too old to join made the kind of jokes only a Viking geek could appreciate. If only Marvel had made Thor and The Avengers in the 90s, I thought, then my teen years might have been a little easier!

This resurgence of interest in the gods has also made me wonder if I should wade into the happy side of Loki worship — the fandom — or take the more serious route and actually find an Asatru group to join. But old habits die hard, and I’m unable to forget one practitioner’s caution that, if you invoke Loki, God of Chaos, you can’t control what he will bring into your life.

As a teen, I had two hobbies. One I chose — reading fantasy novels — and another I had thrust upon me: attending medieval reenactment events with my dad. Sometimes these trips could be fraught, as dad made no secret of the fact that he didn’t think much of me being raised Christian and was disturbed by my lack of social skills and single-minded absorption in fantasy. However, his idea of a remedy was to take me with him on his trips with the Longship Company, a group dedicated to building and sailing replica Viking ships.

As a dreamy teen that sometimes turned on the music in my room and walked in circles in order to invoke a trance state, and who read college-level texts on Viking religion, it wasn’t always clear how weekends we spent rowing a replica Viking ship around Chesapeake Bay would help me fit in. But it was awesome exercise, and I learned the rudiments of sailing, water safety, and CPR. We also used myriad strategies to get us all to row in time with one another, from old sea shanties to simply repeating one word over and over again. Since it was a Viking ship, the word of choice was “Odin”, and we’d draw out the syllables as we rowed: “OHHH-DIN…OHHH-DIN.”

The end result of all of Dad’s hobbies was that we were eventually invited to join the “largest Viking fleet in the world” at a celebration of Leif Erikson’s landing in Norstead, Newfoundland. As it was the first time the crew would be rowing on the open sea, I wasn’t allowed in the boat, and instead watched from the shore with my stepmother. At one point I remember her saying “Why don’t they raise the sail?”

It turned out that the group had been rowing using the usual refrain of “Ohhh-din, Ohhh-din” when one joker decided to mix it up and throw in another god’s name. “Lohhh-key, Lohhh-ke–”

To this day, under any circumstances, I still have trouble saying Loki’s name aloud. 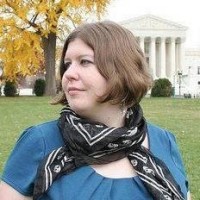