A Linguist Explains the Rules of Summoning Benedict Cumberbatch

Bandicoot Cabbagepatch, Bandersnatch Cumberbund, and even Wimbledon Tennismatch: there seem to be endless variations on the name of Benedict Cumberbatch. In fact, even street signs have gotten into the action:

But how is a normal internet citizen supposed to know, when they hear someone say “I just can’t stop looking at gifs of Bombadil Rivendell” that this person isn’t talking about some other actor with a name and a voice and cheekbones? Or in other words, what makes for a reasonable variation of the name Bendandsnap Calldispatch?

I’m a linguist, and that means that I’m interested in the subconscious patterns that emerge from the way people use language. Based on the fact that fans tend to respond to synonyms of Anglerfish Gigglesnort with a laugh of recognition and not a blank stare, I think there are patterns here too, even if we’re not aware of them. So let’s approach this question scientifically, by generating a range of hypotheses from the general to the specific, and trying to disprove them.

Maybe “urns” and “the” just aren’t long enough, so let’s try some really long words instead. This Wikipedia article says that Counterrevolutionaries and Deinstitutionalization are some of the longest words found in ordinary English text (not counting those behemoths that are made up just to win longest-word prizes). But if someone says “Hey, check out these gifs of Counterrevolutionaries Deinstitutionalization,” I’m picturing that street scene from Les Mis, not a British actor in a blue scarf.

Those words might’ve been too long. And maybe Deinstitutionalization is a little bit abstract. After all, a canonical example like Bumbershoot Cheeseburger has three syllables per word and creates this nice vivid mental image of…I’m not sure what. But it’s definitely vivid. So will any pair of three-syllable words work just as well? What about two other words that refer to a thing that keeps the rain off and a delicious hand-held food? Well, “Did you see the gifs of Umbrella Falafel’s latest movie?” is a bit closer than the previous hypotheses, but it still just doesn’t quite have the right ring to it.

Okay, so maybe coming up with examples off the top of my head based on my intuitions as Someone Who’s Watched Sherlock And Has Tumblr isn’t the best way to do science. Besides, as we all know, the latest trend in the research world is Big Data. But how can we find a massive number of fan-approved variations on Rinkydink Curdlesnoot?

Fortunately, that’s a solved problem. The bounteous internet has already provided us with the Boobytrap Crimpysnitch Name Generator. I assume that its variations are legit based on the fact that it went viral a couple of months ago and that anyone dedicated enough to create such a website is probably a pretty devoted fan. Through highly nefarious means (aka, a quick “view-source”), I managed to acquire the whole list of names: removing duplicates, that’s 68 synonyms for Battleship and 70 synonyms for Craggletoe, plus 8 that were pre-listed together, such as Candycrush Templerun. (For more examples, go check out the generator or see all the synonyms used in this article.)

So I cleaned up the data a bit by taking out the html formatting, put the names into a spreadsheet, and started annotating for factors that might be relevant based on the differences I noticed between Umbrella Falafel and Bumbershoot Cheeseburger, which is the near-miss we had above. Let’s go through the factors that worked one at a time.

It’s nice to see that we were right up above at pointing out that the names almost always have three syllables each: the stats show 98% three-syllable names.

This factor might seem intuitive, but it’s kind of a weird one because there are some great non-BC examples like Wimbledon Tennismatch, Candycrush Templerun, and Bombadil Rivendell, all of which are listed as pre-set pairs in the name generator. It turns out that overall 65% of names begin with the appropriate letter, which is a definite trend but not an absolute. Note that I counted “beginning with c” by the actual letter, which included both the sounds “k” and “ch”, but none of the c-initial examples began with the version of c that’s pronounced “s”, even though there are a few that began with an actual “s”. I also have the impression that it’s slightly better if a pair includes at least one name that begins with B or C, but that this can be bent for really excellent combinations.

The big breakthrough came when I realized that the good examples, like BULBasaur CHARizard, are stressed on the first syllable, while the bad examples, like umBRELLa faLAFel, are stressed on the second one. This one really holds up. 95% of names have initial stress, and most of the ones that don’t are compounds of multiple words, like Butawhiteboy Cantbekhan, which obviously isn’t in any dictionary that will tell me how to stress it but I strongly suspect gets initial stress here anyway.

Another very robust trend is that both words end in a consonant: 84% for first names and 97% for last names. In fact, it’s not just ending in any consonant, but ending in a sound like p, t, k, s, sh, or ch was much more common than one would expect from a random list of words (59% of names ended in one of these sounds, which are known as voiceless obstruents if you want to be fancy). Even more precisely, a full 40% of synonyms for Splishnsplash ended with either s, sh or ch, although only 16% of synonyms for Brandybuck did.

Factor #5: Has m or n between the first two syllables

Both Benadryl and Cumbersnatch have a nasal sound (m, n, or ng) at the end of the first syllable or beginning of the second, and so do 42% of the variants, which again is a strong but not overwhelming trend.

There’s also a minor trend for the very last vowel to be the æ sound in “cat”, as in Wafflesmack and Bumbersplat. For the second word, 27% of names follow this pattern.

One thing that I suspect but can’t prove definitively is that names that are atypical in one factor are more likely to be typical in another. For example, the few names that aren’t three syllables long all begin with B (they’re all first names), like Bunsenburner, Barbituate, and Butawhiteboy. And all of the names that don’t end in a consonant begin with a B or a C, with the exception of Timothy which I gather is Boobytrap Upperclass’s actual middle name. Most of the names that don’t have (provably) initial stress also start with B or C, the only exceptions being Johnnycash and Moldyspore. Names that don’t start with B or C seem to be more likely to have m or n in the middle or æ at the end, like Scratchnsniff and Ampersand.

Here are some cumbergraphs if you want to see the breakdowns by first and last names. We can see the three big factors: initial stress, three syllables, and ending in a consonant, plus the slightly lesser factors of beginning and ending with the appropriate sounds, and the rather surprising finding that occasionally the names actually begin with the letter of the other name. 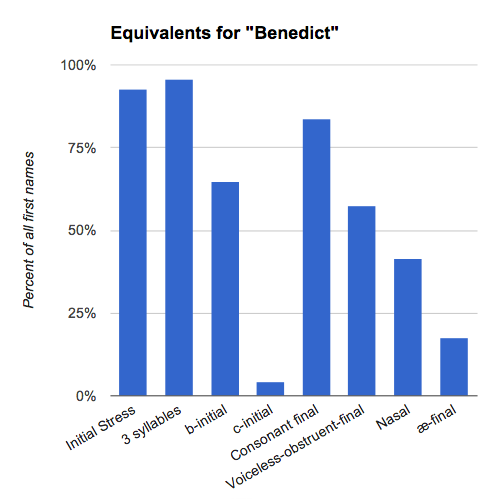 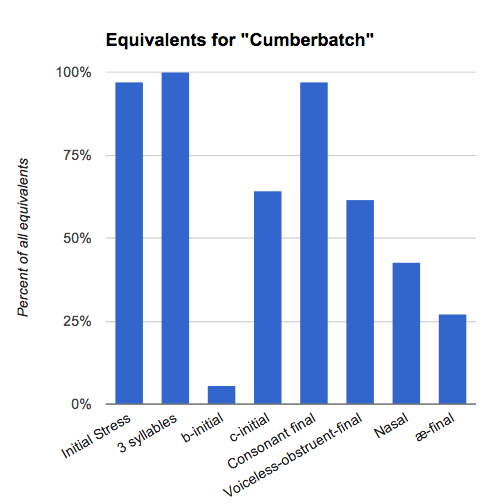 Take-home message: It’s complicated, but there are definitely trends

The tl;dr of how to make a new name for Buttercup Animorph:

Key ingredients: two words (ok if they’re made of smaller words smushed together), three syllables each, stress is on first syllable

At least three of: ends in consonant, begins with B or C, ends in preferred consonant (s, sh, ch), has n or m between first two syllables, has æ in last syllable of the last word

So, does this mean that I have to be self-conscious the next time I rename Buffalo Countryside in case I’m Doing It Wrong?

No! Because chances are, if you’re familiar with the genre, that you’re already doing it right. Remember that these factors are a pattern that emerges if you look at an aggregate picture of what fans of Burgerking Kryptonite are already doing. But a) it’s possible that people could start doing something different with his name and b) it’s possible that I’ve overlooked something that makes your variation especially clever. (Perhaps I should have given bonus points to any name that mentions otters?) Although seriously, pick a name and try it, because it’ll probably actually work.

Thanks to Cara, Emily, Megan, and Vanessa for brainstorming Blubberwhale Frumblesnatch synonyms, although most of the ones used here are actually from the Name Generator.

Challenge: What’s your favourite variation of Snozzlebert Clavichord? Does it fit the pattern? 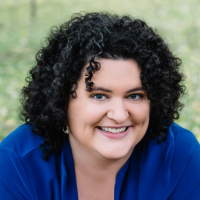