A Movie With Tilda Swinton As a Semen-Powered Robot

There was a sort of romanticism about technology in the 1990s and early 2000s that I kind of miss. Computers and the Internet were still a new enough thing that we treated them a little like actual, real magic. Putting the word “virtual” in front of something made it seem vastly more powerful, and “cyberspace” was still a thing that people actually said unironically. “I’m having a hard time envisioning this ‘Internet’ thing,” we said. “This time try describing it as if it were a glowing crystal labyrinth shrouded by arcane sigils carved into the sky with neon. Try that.”

The somewhat obscure 2002 indie sci-fi movie Teknolust is a romance about magical technology, and it has all of the marks of that era (“virtual cybernetspace” and so forth) but what makes it particularly memorable are the specifics of its subject matter.

Teknolust is a movie about robots that run on semen.

And it is really good.

Teknolust was directed by Lynn Hershman Leeson, a very, very feminist artist and filmmaker reputed to be a tad odd (she once assumed a false identity for four years as a form of performance art). I know that a movie about robotic women who depend upon regular injections of sweet, precious man-nectar to remain in a functional cognitive state doesn’t necessarily sound very feminist, but as you have no doubt surmised, Teknolust is also a tad odd.

Tilda Swinton (as if you expected any other actress to be in this movie) plays a computer scientist named Rosetta Stone (get it?) who has invented three color-coded cyborg clones of herself: Ruby, Olive, and Marinne (red, green, and blue respectively, also played by Swinton).

Since the clones were created using only female DNA, they need to regularly consume male DNA at regular intervals (okay, sure), which Ruby goes out and collects by hooking up with random dudes and saving the condoms for later. Later being teatime. Semen teatime.

Ruby’s lovers end up contracting a digital virus that makes them impotent, leading an FBI agent (played by James Urbaniak, aka Dr. Rusty Venture) and a transgender private detective styled to look like Karen Black (played by Karen Black) to investigate the outbreak.

There is a lot going on in Teknolust, and I don’t understand a lot of it. Structurally, the plot is kind of a mess. The impotency virus is never explained and gets resolved out of nowhere with the literal push of a button. The themes are all sort of jumbled together into a theme gumbo: motherhood, loneliness, sexual politics, the influence of digital media on human social interaction, all of it flavored with a healthy infusion of early-2000s techno-jargon like “portal” and “chat” that I’m pretty sure aren’t actually being used correctly.

The clones’ story is ultimately one about a struggle for agency. For Olive and Marinne (who are implied to be physically intimate with one another, for all you clonecest fetishists out there), it’s about breaking free from the control of their overbearing mother figure, Rosetta. For Ruby, it’s about taking control of her sexuality, transforming sex from a dispassionate, mandatory ritual for the perpetuation of her species (informed by the classic romance movie dialogue uploaded into her brain as she sleeps) to a romantic expression of the mutual emotional connection she feels for another person.

It’s not always super coherent, but honestly, coherency isn’t what makes this movie good. This is one of those movies where the actors’ performances end up being a lot more poignant than the words they’re saying.

Did you guys know that Tilda Swinton is very good at acting? Never mind that she plays four completely differently characters utterly convincingly, so well that many people who see this movie don’t even realize that they’re played by the same actress; she also manages to give incredible depth and charm to what could have been some very silly, stupid roles.

Like, okay, at one point in the movie, this happens:

Those are three cyborg women in yellow kimonos dancing to techno music in front of a green screen for a full minute. In any other movie, this would just be a weird non sequitur, but when it’s done by three Tilda Swintons within the colorful comic book logic of Teknolust, it somehow makes perfect sense. It’s less a movie and more like a piece of performance art that someone happened to film.

Can we also talk for a second about how Tilda Swinton looks really good in a blonde wig?

I don’t really have a follow-up. I just think that’s something that needs to be talked about.

James Urbaniak and Jeremy Davies are Rosetta and Ruby’s respective love interests and are also very good in this movie. I am not going to use the word “adorkable” because that is not a word that people should ever use, but they are both very good at being very awkward in a way that is completely likable.

It’s also worth pointing out that even though a lot of Teknolust is about women having sex, the women are never really objectified, at least not by the camera. For a Sex Movie, the movie is actually remarkably sexless; the act of intercourse is only implied by dissolve transitions or the couple lifting a blanket over their heads. Is that a thing that straight people really do during sex? Make a blanket sex fort?

And even though, yes, this is a movie where the female characters are robots that can only survive with male semen (have I mentioned that enough times yet?), the men in Teknolust are, overall, quite doofy, especially the randos that Ruby has sex with and turns impotent. Look at ’em, in their silly hospital gowns. If anything, Ruby is less a dependent and more a vampire, literally draining her partners of their mojo. And I think that’s a joke that Leeson is very aware of.

On the DVD commentary (which I have listened to multiple times), Leeson describes Teknolust as a comedy that nobody knew was a comedy, including most of the people who helped make it. I can believe it. The movie is full of odd little non-jokes: A doctor treating Ruby’s impotent victims speaks only in whispers for reasons that are never explained. A Band-Aid changes position on James Urbaniak’s face in every scene.

This movie is almost the inverse of something like The Room, which was almost certainly intended to be a drama but was later passed off as a “comedy.” Teknolust was intended to be a comedy but succeeds at being something else instead. It’s like a joke your grandfather tells you that’s long-winded and weird and not actually all that funny but absolutely delightful to listen to all the same. 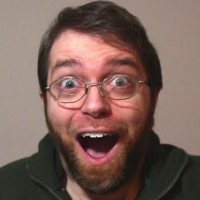 Jamie Maurer is a writer, humorist, and host of an LGBT culture vlog called Needs More Gay. Feel free to follow him on Facebook or Twitter.