The anglerfish swims. She spends her life in the deep darkness of the sea. She notices little outside of herself, only the glow of the occasional passing edible fish and the movement in water created by those too big to be seen in the darkness. Encounters with other creatures happen so far in between that, most of the time, she believes herself to be the only one. She forgets that her swimming is a purposeful search for food; in time, she forgets everything but herself. The majority of her life is spent in darkness, alone. Her interactions with the males of the species are cut short-she notices them briefly as the find her, but then they bite and merge and lose themselves in the worship of her, and she no longer remembers their existence. She does not acknowledge the others who were when she lays eggs, because by the time she is ready, they no longer exist; they are a part of her. They are a tail, a fin, a reproductive organ hanging off of her magnificent surface. The anglerfish requires nothing but the intermittent fish meal: a sacrifice to her altar. Knowing herself to be a god, the anglerfish swims as a prayer to the only creature in the void.

The honeybee is born working: first, she looks after the other young. She raises her sisters, mostly. Hordes and hordes of sisters, all laid by their mother, the queen. She feeds them and gets them on their way. Some stay to help, and soon she is the biggest in the nursery, creaky and large and too old for this task. She begins to leave her home for the cold and bright outdoors, nervous but pursuing an instinct aeons older than herself. Food is found, then brought home, and sometimes she dances and tells her sisters who gather around to listen to the map of her body. She mostly ignores the drones, the males doomed to dim, uninspired lives. She watches them go and does not mind; if they are lucky, they will mate with another queen and die. They will not feel very much in their short lives, and certainly not the satisfaction of the honeybee’s contribution to her hive. Her life is made up of her sisters and her queen. They love her as she loves them: unconditionally, and eternally.

The hyena is proud, fierce, and a little vain. She has reason to be: she is the biggest and strongest in her pack. Her mother was the strongest, too, and she learned from her example. Show only strength. Do not yield. Protect the pups. It is a good example, and she has done well following it. Her pack respects and fears her. She watches the males timidly admire her neck and the quick and clean cracks of bone she breaks when she eats. They are not as strong or as fierce as her females, and sometimes she questions their existence. They are not particularly good for hunting or defending the territory, and they cannot even birth pups from their penises like she can. They cower when she growls, and she thinks how easy it would be to chase them all away, these terrible hunters and even more terrible pup-producers. But she remembers her mother’s carefully guarded secret, only to be told to the next alpha: males are needed for the pack’s survival, useless though they may be. In her mother’s memory, she keeps the males around. She is a good leader.

The praying mantis sits, waiting for food. Some days she hunts, but right now she would prefer to wait for prey to stumble past. She blends in the background so well, sometimes her prey will stop to rest on her spiked claw. Easy pickings. Something passes by, not close enough to catch. She sways an approximation of a leaf touched by wind, and considers herself an artist for the mimicry. She slows, and everything gradually stills. She drifts into the waiting. Something is happening behind her, something is climbing on her, but part of her says that it is Not Food. It has happened before. She is consumed with waiting for Food, so it takes a moment before it occurs to her that perhaps the thing perched on her is indeed Food. After all, most things are food. There is a distant memory of a mating courtship and an unspoken agreement. This agreement feels real, but thin and crumbling in her memory like an old leaf. The hunger is more persistent, more real. So she turns and snatches and begins to eat; another successful catch.

The jacana has to defend her males from other wandering females. She stalks the lilypads of her territory with her large feet, daring them to approach. They want her males for their own harems; they sneak through and try to break her eggs to make room for their own. She fights them off, declaring her territory from the neighboring rogues. She has 3 males this year, and all of them huddled over their respective clutches of her eggs. She feels proud of her choice in males. The nests they created were acceptable; only one had to be corrected. They will raise more of her chicks so that she can do important things. She will focus on staying strong and defending her territory and obtaining more males so that her eggs will have a greater chance of survival. She knows her place in the world: females are good at being strong and defending their territories with sharp beaks and claws; males are good at raising young, able to carry chicks under their large wings. This is why females must have many males to look after their brood – how could just one suffice?

The checkered whiptail lizards long ago lost the concept of males. There is an old, almost forgotten idea of the ones who were different but the same, that the lizards see in other species but do not entirely understand. Checkered whiptail lizards are sisters and daughters only; they hoard their reproduction to themselves and create offspring without anyone’s help. They take pride in their independence, but know that other animals require two to make young. The method seems massively inefficient; all that dancing and fighting and waiting. Why bother, when a lizard can discover a new cave and lay eggs and surround herself with daughters in the time it would take to find a mate and only just begin the whole process? How would a lizard know if she had found the right kind of mate? The whole process reeks of poor planning. The whiptail lizards believe that they have a clever secret to life that they must share only amongst their sisters, lest the other animals catch on and begin to mimic their success.

Kat Weaver lives in Minneapolis with her girlfriend and two birds. Her portfolio can be found here. 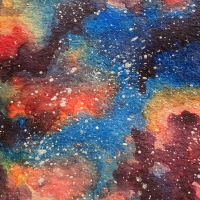 Katie W. has a degree in biology and is particularly interested in the different adaptations and iterations of non-human animal sex.