I like to think that there are a fair amount of things about me that are notable. My refusal to wear socks until it snows. My obsessive love of cleaning out the lint trap and making tiny lists.  One thing people tend to hang onto, though, as soon as they learn it about me, is that I don’t want to have kids.

It’s pretty rare, apparently, for people I know to come upon a woman who doesn’t want kids, and especially rare for that woman to talk openly about not wanting them, even though for about five minutes, it seemed like everyone was writing about the strangeness of the woman creature who did not desire to have children.

Do men who don’t want to have kids have the same social experience? Do they get the same responses if/when they talk about it? I found six childfree men who wanted to talk about this with me.

J, 32, Software Developer: I don’t like kids! I can’t remember a time where I ever really actively wanted kids, though I’m sure everyone who doesn’t want kids had a phase at some point where they assumed they’d have them, because it’s just how things work. I can’t relate to someone who can’t communicate in full sentences.

Dan, 31, Non-profit and music professional: I feel like I am leading a very full and fulfilling life, so I don’t know that there’s a “hole to fill” so to speak.

Drew, 38, Bank Auditor: There are so many layers to this. My own pessimistic outlook. Economics. The apparent misery of some of my friends who are parents. And a general aversion I have to any decision I can’t unmake.

Benjamin, 31, Theatrical Designer: I am not particularly confident in the direction that our world is taking and I’m not sure I would want to watch the next generation grow up with so much invested in an individual who is inheriting that world. I don’t think I can give a child the kind of life that my parents gave me and therefore I am motivated to not even try. There’s also the very good reason that I don’t actually like children. I find them frustrating because I can’t have a conversation with them.

Michael, 32, Grad Student: I feel that I have enough insight into my own functioning as a human to know that the sacrifice of “giving yourself” to another human being is not one that I want to make. I understand that throughout the child’s life, that dynamic could change, but it’s something that gives me pause.

T, 44, Grad Student: It is as if the desire for kids was never there.

Me:  My own reasons are complicated, but simple. I want space and time and energy to write and travel. I don’t like caretaking, I have no desire to ever fill that role.  And I don’t like kids, I don’t like the chaos or the unpredictability or the demands. It’s hard to admit that you don’t like kids, and I was really surprised that these men were able and willing to do so so quickly and unabashedly.

J: I’ve rarely gotten real pushback. The worst case is usually either people joking with me about it all the time: “Hey, there’s a baby! You want to say hi to the baby?”

Dan: There are definitely people who don’t entirely believe me, but they mostly keep it to themselves…I don’t have to justify being not interested in having kids if it’s just said out of nowhere…whereas if I mention that I’ve worked with kids often, or if people see how I act around kids, they’re disappointed to find out I don’t want any of my own.

Ben: When people attempt to have the “but you have to have a kid or it’ll be too late” conversation with me, I very calmly explain to them that I’ll not be making that life choice.. Those who have children and are older by a decade or so (and who are interested in having the discussion) mostly seem as though they are trying to convince me to have children. Those who are younger by a decade or more seem to pity me (as I must admit I did at a time in my life that I was confronted with a similar situation.)

Michael: As a man, I can honestly say I have not felt pressured to have kids, but frequently field questions about it.  When I tell people I don’t want kids, the comment is well received once I explain why. I have received positive feedback on the reasons why I don’t want to have kids, even from people who have kids.

Me: Yes, I mean never. I never want to be a parent, and the reasons for that are complicated, but I’m sure.

T: The only people who have ever been truly puzzled by my decision not to have kids are my younger female students (some of whom have already had kids by the age of 19 or 20). They didn’t say I was selfish, they just didn’t understand how I could not want kids.

Michael: Is the decision selfish? Yes. Sometimes, we have to do what’s best for us and our lives at the risk of sounding selfish. I think it’s important to have a child for the right reasons. Not to fulfill an expectation you’ve placed on yourself, or to fix a broken relationship. It’s family planning in the purest form, and that planning can sometimes come in the form of not planning at all.

Dan: I don’t think other people necessarily think of it as selfish. I also view selfishness as something that everyone has and most people made decisions with, but not everyone acknowledges it. There are plenty of ways for people to be selfish that involve having kids

I’m just happy to own up to the fact that selfishness (and interest in not being restrained in my pursuits) is the primary reason for not wanting kids.

Me: I’m just going to say it — there are different definitions of what constitutes selfish for male and female folks. Women are selfish when we don’t put things ahead of ourselves because that’s what women are supposed to do and who we’re supposed to be. I think women are fearful of being called selfish, and it’s interesting to me that these men seemed to not be nervous about owning the word and using it to describe their decision.

“Aren’t you worried about missing out? You should just do and then you’ll understand.”

Drew: I’m sure going to war broadens the mind as well. It has certainly made some great people and great works of art. But I think I’ll pass. This “you’ll understand when you have your own” idea is code for “once I had one, the idea that it was a bad move became literally unthinkable.”

Dan: Our culture has this idea that because we have the internet and technology and airplanes, that everyone has the right to experience everything. Everyone is going to miss out on things…and it’s not so much missing out as much as living and experiencing different things.

Ben: Maybe the payoff would be great and it would surely be incomprehensible, but it could go either way and I don’t feel like there’s a lot of middle ground. I view it as a business proposition: the cost outweighs the payoff. I’m not interested in making that 18-year commitment in order to feel deeper emotions.

Me: Women spend a lot of our lives responding to expectations, even if we’re not actually interested in doing what’s expected of us. When I realized that having kids was a choice, and that it was a choice I didn’t want, I didn’t look back.

“Real men want to make more of themselves! Spread your seed!”

Ben: I think that’s a social construct, though, personally, not an ingrained species-specific thing. I have never felt that urge and I have never felt less masculine because of it. I’ll tell  you one thing, though: no one ever asks me if I’ve told my wife that we’re not having children yet and that seems to be the reaction of younger folks when my wife tells them she is committed to being childfree.

Michael: For straight men (and apologies for the sweeping generalizations) it’s different. I think if a man in an opposite-sex relationship/marriage may hide the fact that he does not want kids, and he may feel that people could interpret or suspect he is sterile, or even possibly gay. I have heard this from a number of people and in discussions about sex and gender roles in school.

Me: If I wake up in a cold sweat one day with my ovaries knocking or whatever happens, I still won’t want to parent. This is still a choice.

After my incredibly un-scientific survey of childfree men, it does seem like both these dudes and I share some common experiences: the skepticism, the accusation of selfishness,  the assertion that “if you just do it, you’ll understand.” Similarities are always good, I think, especially when it seems like you’re the only one.

Here’s the difference: While my reasons for not wanting kids are exactly the same as those articulated by the men here, my experience of talking about these reasons are very different. If a woman doesn’t want kids, on the other hand, there must be something wrong with her–biologically, emotionally, etc.–and so it’s become an outstanding thing about me, not just one thing that I happen to not want. The whole way I’m constructing my life as a woman is contrary.  When I talk to (some) other women about not wanting children, they’re often not only in disbelief at my choice, but also talk about feeling threatened. I understand why, especially if you’re already a parent. Men are socialized to see children as an obstacle, a liability, and to see parenting as an option, even when and if they are actually parents. Children and caretaking are not supposed to be their universe. They have other lives.

I think Ben cinched it when he said, “No one ever asks me if I’ve told my wife that we’re not having children yet and that seems to be the reaction of younger folks when my wife tells them she is committed to being childfree.” 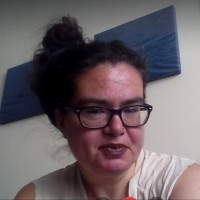 Chanel Dubofsky's writing has been published at Cosmopolitan, The Frisky, The Billfold and others. She is interested in your personal choices.