Femslash Friday: How I Met Your Mother

Let’s begin with a disclaimer: I love Marshall Erikson and I only want good things for him.

You can’t discount Marshall Erikson and Lily Aldrin’s two decades of history with a simple handwave when it comes to the How I Met Your Mother-verse. They have one of the healthier, happier marriages currently airing on television. They’re best friends. There’s tons of love, support, and respect between them. Their fights run the full spectrum from hilarious to heartrending. They’re basically the sitcom equivalent of Eric and Tami Taylor.

This isn’t about Marshall. This is about how there’s another fact that cannot be handwaved away, and that, my friends, is a little something I like to call The Canonical Bisexuality of Lily Aldrin.

Lily’s bisexuality is handled in a cool, subversive way that you wouldn’t normally expect from a gentle CBS Monday night sitcom. It’s never been explicitly articulated, but it’s more than just a long-running gag. Her husband is aware of it, unthreatened by it, and it’s generally unremarked upon by the rest of the characters. There’s been no Very Special Episode where Lily slaps on an LGTBQ button and the whole gang runs through all possible reactions to her news. It’s simply woven into the character’s DNA, as much a part of who she is as her red hair or her shopping addiction, and none of her friends – even hyper-insensitive Barney – comment on it, because to them, it’s un-extraordinary enough to be worth a discussion.

Granted, some of that can be attributed to the fact that Lily’s been married to a dude since the second season, and that affords her a certain amount of passable straight-girl cred. Lily met her husband on the first day of college, back when they were both pretty much fetuses. They fell hard for each other and never looked back, so dating girls – dating anyone besides Marshall – was never a thing she had a whole lot of time to explore.  And yet the creative team behind HIMYM, in a marked contrast all those dramatic series writing in hints of homoeroticism to queerbait the fans without ever intending to follow through (yes, Sherlock. Yes, buddy, I’m looking right at you.), never shy away from Lily’s reality.

HIMYM understands that even if it’s being played for laughs, you cannot have a woman constantly discuss how much she wants to fuck her best friend without having that desire be an actual component of her sexual identity.

The first hints of Lily/Robin were planted all the way back in the late season one episode “Best Prom Ever.” Lily and Marshall are deep into wedding plans, and they’ve dragged the whole gang to a prom in order to check out a band they’re thinking of hiring for the reception. As the night goes on, Lily is plagued more and more by doubts about her impending marriage. None about Marshall, she’s quick to remind herself, but about the life she’s about to disappear into.

Finally, she makes her escape to the bathroom. And Robin Scherbatsky, eternal object of Ted’s desire and Lily’s newly minted best female friend, follows after her. She’s noticed that Lily’s been off all night. She’s noticed that every time the wedding plans come up, Lily becomes just a little bit more unhinged than is really reasonable.

Robin visibly screws up her courage and asks – the way that only your very best friend can ask a hard, terrible question when you both know the answer, an answer that she knows you still need to say out loud – “Are you having second thoughts?”

So quiet, so reluctant, but this is Robin, and Robin is the one person in her life who won’t judge her for this. Robin, still unsure herself if she ever wants a husband, is the only person who’s going to understand.

There were things Lily wanted to do before she got married. Live in Europe! Be a painter! And, she adds, have a lesbian relationship. She’s hit that particular regret twice already, in this one episode.

Robin counsels her through it all, assures her it’s normal, promises her that some of those things are still on the table, and that she’s still ended up somewhere really good.

“And,” she adds, “as far as your lesbian experience…”

She leans in and gives Lily a sweet, brief kiss on the mouth.

You get the sense that this pretty chaste encounter has been played out in Lily’s fantasy file a lot over the next nine years. To wit:

“Robin Scherbatsky,” she says dreamily. “Star of some confusing dreams that remind me a woman’s sexuality is a moving target.”

To Barney, defensively: “I mean, she’s great. Sweet. I’m not going to pretend that I haven’t noticed her body.”

To her husband, when he says he was thinking about Robin as they’re about to start having sex: “Oh, I’ve done that a few times. Just lean into it. Let it fuel things.”

Lily’s life is no great tragedy: she simply took one of two paths, and the path that she took has been, for the most part, richly fulfilling for her. But there’s this whole other part of herself that she always wanted to explore, the road she glimpsed but never traveled, and I want that chance for her.

No matter how much she loves her husband, it’s always been clear that Lily wants that chance, too – and she wants it very specifically with Robin. Sexy, sharp, confident Robin Scherbatsky, a lady more than worthy of inducing a sexual identity crisis in straight women and gay men alike.

And while I love Lily’s marriage and will speak of it with respect, I feel in no way obligated to do the same for Robin’s absurd relationship with Barney. Look, Neil Patrick Harris is a human woven out of sunlight and clovers and leftover magic Pixar dust. We’re all in agreement on that, but Barney Stinson is a human bag of rotting trash. Occasionally, I’ll enjoy the delightfulness that NPH somehow manages to imbue him with, but mostly, I spend a lot of time wanting him to shut his garbage mouth.

We’re getting down to the roots here, and at the very core of Barney Stinson, no matter how much the writers have tried to flesh him out, there’s nothing but a man-child who is totally emotionally unprepared and ill-suited to marriage. Especially marriage to someone as balls-to-the-wall awesome as Robin.

He constantly talks about the desire to fuck other women, oftentimes directly in front of her. Articulated, detailed fantasies, not the idle comments that any reasonable significant other would let slide. He continually goes against Robin’s explicit requests, occasionally to pull off a large-scale romantic gesture, which doesn’t really make up for how he went against her explicit requests. His marriage proposal, which the audience was clearly supposed to see as one of those romantic gestures, was so sociopathically manipulative on every level that Robin’s acceptance came as an actual shock.

Honestly, Robin has to be genuinely concerned on the weekend of her wedding that her fiancée may have booked a grizzly bear to walk down the aisle.

All of those things combined with the years and years of blatant misogyny? NPH may be a national treasure, but I have no problem shoving Barney out of the picture, preferably off a cliff, washing my hands of the whole mess, and gently swiveling Robin in Lily’s direction.

Before Lily, Robin had never had a girl for a friend before. She’d never opened up to anyone else, never trusted another person with the full depth of her rages or the extent of her sorrows. She’d always been reluctant to articulate her real feelings on anything, but from the moment they met, Robin was somehow always able to talk to her. Even when it makes her uncomfortable to do it, even when it’s hard, she loves Lily enough to get there in the end.

When Lily became incredibly preoccupied with wanting a baby, Robin started pulling away from their friendship gradually. She didn’t tell Lily why, hoping she could slip out of Lily’s life unnoticed, and finally the two of them have a brutal blow-up. There were fair points on both sides: Lily was annoyingly obsessed with impending pregnancy, Robin was uninterested to the point of rudeness, and finally, they declared that they were in two different places in their lives and might as well call it quits on their friendship.

Robin didn’t know how to fight for it. She’s too good at pushing aside her feelings, and she couldn’t figure out how to tell her best friend that she loves her and it’s terrifying to think that when the baby comes, Lily could forget all about her.

But Lily didn’t let her get away with that. How do you survive the transition when one of you wants desperately to become a mother and the other is totally uninterested in children? It’s hard, it’s messy, and watching them fight there way through it, well, there was nothing to call that but absolute love.

Lily’s one of the few people in Robin’s life who won’t let her off the hook, who reels her back to earth every time her emotional barricades have sent her spiraling out, away from the people who love her. Lily brings her back every time, and every time, Robin lets her do it.

Isn’t falling in love with your best friend the dream? Somebody who’s always had your back, who always takes up for you in arguments with your significant other, who helps you move and puts up with your quirks and loves you for being an emotionally closed off mess because they’re the only person who can coax the feelings out of you when it’s time to spill?

It’s been years and years of ping-ponging back and forth between Barney and Ted, Ted and Barney. Lily’s just about the only person in Robin’s life who’s never put any demands on her. Robin is the best, and therefore I want her coupled up with the best. For Robin, that’s Lily. That’s her best friend, who loves her like crazy exactly as she is, who’s supported her through crappy jobs and crappier boyfriends, and who’s already wildly, insanely attracted to her.

I also want to believe in a utopian society where, if Lily told Marshall she and Robin had fallen madly in love, Marshall would be totally at peace with it and give them both his blessing.

He’s a perfectly nice dude. Maybe he’d surprise us all. 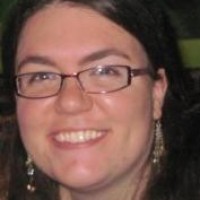 Molly Shalgos is a writer living in Los Angeles who still believes it's not too late for her to become this generation's vampire slayer. You can follow her on Twitter and if you've got a good ghost story, she wants to hear it.