Wicked: Haters to the Left, Please

When I was fourteen, basically the greatest way to spend an afternoon was to turn the volume all the way up on my CD player (so vintage) and dance and sing along to the cast recording of Wicked.  I did this for hours. I had that CD memorized. I even had blocking – limited, of course, to directions like “during this line, stand on the chair” and “during this song, spin around on the bed,” but like any great director, I worked with what I had. As a teenager, my love affair with musical theatre was a badge of uniqueness I sewed to my sash with probably too much pride, but as I got older, I turned my back on Wicked in a nasty way.

For anyone who doesn’t only listen to musical theatre, first of all: congrats on never having to experience the agony of Barnes & Noble shelving your beloved cast recordings under the insulting heading “Soundtracks.” Second of all, let me explain: Wicked is a musical based on a book that is a prequel to The Wizard of Oz.  It’s about Glinda the “good” witch and her friendship with the “wicked” witch (named Elphaba) back when they were roommates at university. The one you thought was wicked was really just mistreated by society, and the one you thought was good is vain and shallow. Over the course of the evening, the audience sees how Elphaba became the wicked one, learns an important life lesson about labels, and as a fun bonus gets to watch a lady in green make-up belt some ridiculous shiz (inside joke) while being lifted on a rising platform through the roof.

To teen-aged me, Wicked might as well been called “How to Feeling Special Despite Being an Unattractive Nerd.” Like all teenagers, I thought I was socially awkward and ugly and also that I was the only person in the world to posses this combination of traits. If there were a way to distill the essence of an adult telling you “Bill Gates was a geek too, and now he’s a millionaire!” and turn it into a sequence of catchy songs, that would be what Wicked was for me. Singing along to that CD let me indulge in the idea that I was special, in a positive way. “Your specialness will lead to great things,” it said, rather than “you’re a giant turd and everyone is staring at how crooked your glasses are.”

We almost always get over our childhood crushes, and my other passions fizzled out into a rosy memory or a blank indifference. But with Wicked, my pendulum of affection swung hard in the opposite direction. By the time I graduated high school, Wicked was a reviled piece of garbage. Not only did I hate the show, I loved hating it. I had a checklist of problems that I would explain with twisted delight.  “It’s too much spectacle,” I would say, as if I was so over looking at things that are cool-looking. If I was feeling really up on my high horse, I’d talk about the show’s allusions to race, war, genocide were too overt for my tastes. I don’t remember quite how I worded this criticism, but I like to imagine it went like this: “I’m eighteen years old, so naturally I have a preference for the elegance of my Holocaust metaphors.”

At almost no point did these criticisms have anything to do with the show itself. Rather, this was how I demonstrated to the world that I was a theatre-goer with “taste.” It was also a very convenient perch for me to look down on women who identified with the show the way I once had.  I turned “something that doesn’t speak to me emotionally anymore” to “something that doesn’t deserve to exist.” From there, it was easy to say that people who liked the show didn’t deserve to participate in theatre.

When the show opened, critics seemed to respond the same way – not just that the show had issues with plot, or tone, or with overproduction, but that it literally did not deserve to exist. Ben Brantley of The New York Times concluded that the show did not “speak hopefully for the future of the Broadway musical.” John Simon for New York Magazine deemed the songs “worthless” and a good performance by Idina Menzel as “all in vain.” In The New Yorker review, John Lahr borrows a line from the score to describe the patrons who gave the show a standing ovation as “brainless.”

Show that cater more overtly to the generic “family” audience get a pass that Wicked didn’t for not being the choice of adults. Chitty Chitty Bang Bang, for example, where a car flies to the rafters instead of a lady, got a practical rave from John Simon. Of Chitty, Simon writes that the songs “are less than sensational but more than satisfactory” given the family-friendly nature of the show. Ben Brantley admits that Chitty is a design-heavy show, but instead of tearing these elements apart as needless spectacle, says it looks fun, like a place children would want to inhabit. Of course: the songs are enjoyable for its audience. The set is exciting, for its audience.

It doesn’t seem like Chitty Chitty Bang Bang had any problems being reviewed as a show not written for everyone. So what was so appealing about insulting Wicked or the fans who loved it? Certainly, there’s always something cool and rebellious about picking apart a piece of popular culture, especially one, like Wicked, that the world seems to love. And the show certainly had some issues that critics were right to point out. But saying Wicked is not a legitimate work of art for a particular audience is saying that the particular audience is not legitimate. Teenage women deserve to see stories about characters with whom they identify onstage. They are not “brainless” for enjoying having a language with which to talk about themselves. I’m not saying the show should exist above criticism; just that “too much spectacle” can’t be code for “too much spectacle for a trivial subject like women’s emotions.”

I don’t think it’s too much to ask either that we stop policing the way young women express their joy in things, either. The New York Times re-review of the show in 2005 even brings up how the show has become a “religion” for “teenage girls,” describing one fan who could recite every “word, gasp, and pause” in Idina Menzel’s Tony acceptance speech. While I guess theatre critics are supposed to report on the culture at large, and “the show is a huge hit with teenage girls” is an important part of the story, I doubt Jason Zinoman included that particular anecdote to convey anything beyond “teenage girls are silly!” Meanwhile, Ben Brantley in the New York Times notes the audience giving louder applause to the car than the actors in Chitty Chitty Bang Bang, but instead of mocking the audience for this blunder, personifies the fake car with a diva-like sensibility. Yup: teenage women who like Wicked are brainlessly following a religion, but applaud a car onstage and it’s probably because the car has a desperate need for attention.

When the theatre community openly mocks fans of a show like the fans of Wicked were mocked, it’s no wonder I, around the age I decided I wanted to work in the theatre professionally and transferred into my college’s playwriting program, pulled a loud 180 away from Wicked. “Look at me, I’m not like those other women, with their hysteria and their emotions,” I might as well have been shouting.  “I’m about serious theatre.”

As I inch forward in my artistic development, I’ve found some wonderful female mentors and have learned to love telling stories about women. Sometime in the past couple years, too, I realized it was a lot more fun to just sing along to Wicked when it pops up on the Broadway Pandora station, rather than nitpick the absurd rhymes. The other day, just to see what it was like, I closed the blinds, put “What is this Feeling?” on my iPod, turned the volume all the way up and pretended I was on Broadway. It was amazing. 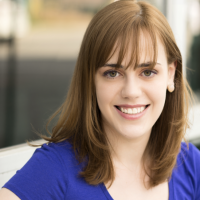 Sarah James lives in Chicago, where her plays have been hailed as "not meeting our production needs at this time." She tweets for the very niche market of Broadway and Pittsburgh Pirates fans.