I Am, I Am, I Am: Writing While Black and Female

Lately I never leave the house without my armor. Maybe it’s because of my passion for social issues and cultural representation, or to paraphrase the clinically sharp bell hooks, the dismantling of our white supremacist society that teaches black folks to internalize racism, has become an easy target for chauvinists. Some people of the patriarchal army would believe that I actively place myself in the role of the victim. (How many times have I heard that I’m too angry, too defensive, whining like the girl who cried wolf?)

It’s strange to think that I am a writer when my voice is small, stereotypical for someone of a compact stature. Regardless, when people ask me what I do, the words slip from my mouth like some kind of eel and I affirm, “I am a writer.” Naturally, the aspect of writing as a means of employment, in addition to the mysterious skyscraper island of the publishing industry invites questions. How did you get published? How long does it take to write a book? Eventually the mechanics regarding writing and publishing are discarded for the meat of their bewonderment: what, exactly, is your book about?

When you reveal that you are writing a literary fiction novel, responses amasses to a sea of politely-veiled distaste, that familiar breed of New England judgement (But what are you doing for work?). Imagine the shock and confusion that skitters across the faces of those select few who cannot process the idea of a young black woman actively choosing to write about race and gender politics. To write about such a conversational taboo is akin to running through the streets naked, calling attention to literal and emotional vulnerability.

One man, a stock portrait of seventy-something white male conservatism, told me to follow the trends, which he perceived as Harry Potter, vampires, and spy novels, Tom Clancy-formulas. He is very much the intended audience for the Tea Party or any extreme right-wing movement that uses minorities as scapegoats. He expressed his distaste for my entry-level job in publishing, reducing it to a pencil-pushing hell, the result of the inherent laziness of that thing called a “Millennial.” He had never heard of the “high-brow” novels that I cited; the names of James Baldwin and Toni Morrison escaped him, as did any woman writer who didn’t have the last name of Meyer, Rowling, or James. Malcolm X was as frivolous a literary icon as was Joan Didion. The authors I rattled off were just a reflection of my destined failure into obscurity, someone who foolishly threw away an easy shot at commercial success. Even if I had the patience to share my connection to the progressive activism found in some of my favorite works, this sixty-something Grumpy Old Man could not understand a life in pursuit of anything but an enviable tax bracket. It would actually surprise me if I met a white man of this demeanor that didn’t equate writing about radicalism as a public temper tantrum. In the old days, men would label this a symptom of female hysteria.

The female writer is an anomaly, some fragile dress-up doll, and in a culture where gender inequalities and “gender wars” are dissected in the most nondescript of blog forums to CNN and Fox News, the unthinking older white male reader sees such a writer as too “emotional,” concerned with biased issues that lack cultural relevance. One such man came into my apartment, noticed that I was reading Wolf Hall by Hilary Mantel, ignored my nondiscriminatory bookshelf (Jack Kerouac, Fitzgerald and Tolstoy sit right next to Mary Karr, Zadie Smith, Sister Souljah, etc.), and demanded, “Do you only read books written by women?” A few weeks later, he was proudly harping on about the virtues of Ayn Rand, a newfound convert to Objectivism. When I told him that I didn’t have any interest in Ayn Rand, he was surprised, borderline offended. I suppose being a woman writer means that I must automatically praise any woman writer, even if I don’t subscribe to her views.

Another older white man that asked about my writing wanted to know how I was going to publish my work. He had a bit more knowledge about the publishing industry than the average reader due to family connections. I told him about the “plot” of my tentative novel, which openly discusses mental illness and echoes the narrative of Plath’s The Bell Jar. Contrary to the popular notion that Plath has fallen into the sphere of low-brow public mockery, many of the people I encounter have never heard of the author and if they have, they automatically associate her name with the disgrace of suicide, nothing more, nothing less. This older white man frowned as I articulated the plot and despite the unsaid confirmation that my work was indeed adult fiction, he suggested that it could be a children’s book and he knew someone who knew someone who worked in children’s books and could give my manuscript a read. I suspect that he would not be surprised, or even care to know that in 2012, only 3 out of 124 authors on the New York Times Top 10 Bestsellers were people of color.

His comment is a microaggression, a coded way of saying that my work is childish and immature, that the subject matter is not something that interests or even pertains to adults. He looked at the unintimidating presence of my physical body and assumed that my words and the root of my experiences were not based in reality. Maybe this older white man would say that I am “angry,” that I am making a big deal out of nothing, much in the same way that Facebook “friends” cited the trial of Trayvon Martin as irrelevant, just another example of black people pinning every societal interaction to racial injustice, as if the black experience was not constantly under the gaze of white patriarchy and supremacy. I’m pretty sure someone reached into his or her basket of buzzwords and tossed out “reverse racism.”

In elementary school, I was labeled a “troublemaker,” a student not to be trusted. My behavior, even if it was in retaliation to a personal attack, was always a troubling sign of the inability to submit, an ailment specific to mouthy black girls who did not want to be a token or someone’s source of entertainment. My father lamented the fact that he’d missed his chance to join the Black Panthers and my mother, an immigrant at the age of twenty-one, cried constantly when she first moved to the States because people were always telling her that they couldn’t understand her accent. Even before I knew about the intricacies of racism and power structures, even before I was itching for “adulthood” and replacing my copies of Sweet Valley High in favor of Anaïs Nin, I could not, would not become the little wind-up doll that everyone expected. I would not shrivel in the face of racial opposition. My parents, especially my father, had taught me that silence could be seen as cowardice, a lack of self-respect.

Chimamanda Ngozi Adichie, award-winning and Beyoncé-approved Nigerian author, commented on the expectations placed on young girls. In part of her TED talk, she says:

Dare I ask these men why they are so frightened of a girl who is not looking for a platform, but to reclaim the right to speak without inevitable punishment, without condemnation?

People assume that if you are actively pursuing the writing life, that you want to be famous. They think that you are writing a book that is intended to be a Hollywood movie, some glittery version of your truth. No one ever guesses that writing is a way of going for the throat. People assume that my ambitions can be boiled down to a need to be liked. I spent my teenage years wanting to be liked and it nearly destroyed me. For some time I believed that my mind had been so corrupted by the impossible standards of others that it needed to be swiped clean off, in the same way that a praying mantis snaps off her lover’s head.

Why should I back down?

Why should I be made to feel ashamed for pursuing a writer’s life that speaks to my experiences?

In the final paragraph of her Introduction to Black Looks, bell hooks says, “When I face this image, this black look, something in me is shattered. I have to pick up the bits and pieces of myself and start all over again—transformed by the image.”

When I write, I am facing the dueling images of myself, the personas of young woman writer and black woman writer. I am not immune to commercial fiction (I not ashamed to identify as a self-appointed Harry Potter fan for life) but the strengths of my writing rarely venture into this field. I am more interested in confronting the aftermath of the wreckage, searching for life beneath the twisted metal of the crash. I am writing in the footsteps of black women academics and intellectuals like hooks, hoping to demolish the master’s tools and the master’s house. 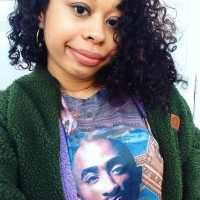