I Am Curious Yellow: Life With Synesthesia

For most of my life I thought it was normal that Vladimir Nabokov’s name was always ink-blue and ivory, that A is a lipstick-scarlet letter, that the word opium is the color of a pomegranate and N was the same brown as the word November. That a song could smell like tobacco and vetiver and bitter orange, a taste so thick that you could feel it smeared across your tongue. I thought that everyone saw the alphabet laid out in front of them in a wild array of hues, with the more vivid colors at the beginning and the deepest colors living in the middle, then finally fading out towards blacks and grays. After all, if other people didn’t see the letters like that, then why did they make refrigerator magnets all those different colors? I thought it was such a common thing that nobody ever bothered to talk about it.

I was thirteen, reading A Natural History of the Senses by Diane Ackerman, when I first came across the word “synesthesia,” which literally means “union of senses.” Synesthesia is a rare condition where you taste words, for example, or smell colors or see sounds or personify numbers: a mixing of the senses in any number of permutations. It’s so rare that my word processor doesn’t recognize it. Synesthesia can be a side effect of hallucinogens like LSD or the result of a head trauma, but some people are born with what’s called developmental synesthesia. At the time, I didn’t understand that what I was reading applied to me, which apparently is common with developmental synesthetes. This was the way I had always lived, I never knew there was another way to experience the world.

My mother once told me a story about my father. He grew up one of six children in a middle-class family, wildly neglected to the point that for most of his childhood, he had been unable to see clearly and had suffered from terrible headaches. He needed glasses. After years, once his parents finally realized what was going on, they took him to the optometrist and all of a sudden he could see clearly. For the first time in his life, things started making sense. He had never thought to ask about why his vision was so bad. He hadn’t known it was bad, he thought that was the way everybody saw.

The last thing I needed at thirteen was another thing to make me different. Ten years later, my age is raspberry, a color created by the combination of the bright red 2 and the hot pink 3, and I have just begun to realize that perhaps my view of the world is not entirely normal.

My initial self-diagnosis is that I have what’s called color-grapheme synesthesia: seeing letters, words, numbers, and other linguistic symbols as colors. It’s one of the most common types of synesthesia and each synesthete has their own color-symbol associations. I’m not sure that’s all for me, however, since emotions, scents, and songs are also colors and sometimes songs are also smells. It’s not that I see the words in color so much as perceive them that way. I can see the difference between writing with a black pen and a red pen. But there is one color that I see, the real color, and then there is the projected color, the one that I suppose lives in my “mind’s eye.”

All of a sudden, there are so many questions that need to be answered? What makes my brain different, and why? Where did these color associations come from? How can an involuntary thought be as real as something that I’m actually seeing right in front of me? How could I spend my whole life not knowing that this was a weird thing?

It doesn’t help that our language is rife with synesthetic phrasing. A sharp laugh, the bright notes of citrus in a perfume: these are not things that one literally senses. A laugh can’t be literally sharp, and the smell of citrus doesn’t emit light, but we still use and understand these phrases. There also are commonly known cultural associations with colors: blue is relaxing, black is for mourning, pink is girlish and sweet. Why? What is the difference between these things and feeling that depression is a pompous, hateful lavender-gray?

I’m just beginning to understand how little I understand. There are studies at universities I’d like to participate in, a mailing list I need to get on, a yearly conference to look into, and so many books on the subject I need to read. I’ve started writing out charts with my different color associations, which is a much more elaborate system than I ever realized. I’ve also started using my color-number associations to memorize pi. I figure if I’m going to have an identity crisis that questions the very nature of reality and perception, I might as well get a fun party trick out of it.

So, who wants to know what color their name is? 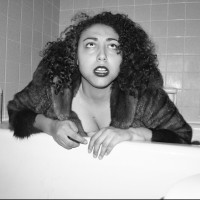 Gabrielle Loisel is an artist, witch, and writer.