What Happens When You Tell People You’re Reading Only Women?

In 2013, I made a small but very personal resolution – that I would spend the year reading only books written by women. 12 months and 40 books later, I published a piece on Flavorwire.com about the project and how it had affected my life. I merely hoped that a couple of people would be touched by the story and also decide to actively read more books by female authors, thus making small strides against an industry that publishes, promotes, and awards more books written by men.

The day that the story was published, I immediately noticed a spike in Twitter followers. People – women and men – were tweeting at me from around the country, telling me they’d decided to take on their own similar only-books-by-women project and asking me to recommend titles I’d read and enjoyed. Even one of my favorite newspapers, The Guardian, dedicated two separate pieces to my story and to the idea of reading only female authors.

But there was also plenty of criticism, as there always is whenever a woman has opinions and an internet connection. People called me sexist, reverse sexist, and a misandrist. One Flavorwire commenter dismissed the significance of focusing on female authors and announced that he would only be reading books by authors who were tall.

I’m thrilled that a little fun personal project I didn’t think much of at first has turned into a phenomenon that even has its own hashtag. But the point of the reading project was to raise awareness about the way that female writers are still seen as less important, less literary, and less canonical than male writers, and even some of the coverage about my work hasn’t changed that.

Case in point: when The Guardian launched its #readwomen2014 project, they interviewed one writer/critic who had vowed to read only female authors in 2014 – a man, Matthew Jakubowski, who explicitly named my Flavorwire story as his inspiration. [Full disclosure: Matthew is an internet-friend and we’re part of a group reading Middlemarch together.] Even when it comes to promoting books by female authors, it’s evidently still more important to ask men what they think in order to legitimize something that might reek too strongly of feminism. Soon, other publications like Time jumped on the bandwagon, praising The Guardian for their idea.

At first, I didn’t say anything. Deep down, there’s a part of me that still believes that a woman wanting credit for her work is arrogant and vain. But the real driving force behind my 2013 project wasn’t simply to know the gender of an author – it was to support women’s stories, to make sure their narratives were heard. Yet it was still difficult to raise my own voice. The internet can often feel like a giant, elaborate game of Telephone. And it’s not as if I was the first person in history to focus on female writers. But I couldn’t help but feel slighted – and like I was losing control of my own narrative.

I told myself that I should be grateful that people were reading books and championing female authors, no matter where they got the idea. That’s what one of my college English professors used to say when he saw undergraduates toting copies of Twilight around campus – “well, at least they’re reading.” A Pew study released last week found that 23 percent of American adults did not read a single book last year. The largest group, 31 percent, read between one and five. There were no options higher than the number 11.

And, ultimately, it was about the books. Before politics or activism, it was about reading Anzia Yezierska’s Hungry Hearts and catching a sliver of what life was like for my great-grandparents, Jewish immigrants crowding their hopes into the tenements of the Lower East Side. It was about giving Edith Wharton, a writer I’d disliked in college, a second and more sympathetic attempt now that I was old enough to know the pain of femaleness more intimately.

Reading is so much more than looking at words on a page. At least they’re reading, as if a grocery list and a poem could be the same, could each weigh as much as the other. I wanted my reading, a pastime I enjoyed for its quietness and solitude, to also be a declarative statement. Women have always understood that there is more than one path to revolution. Quite simply, I would not be the human I am without having read My Antonia when I was sixteen years old.

There were also discoveries. One book that randomly caught my eye was Watch How We Walk by an author I’d never heard of, Jennifer LoveGrove. The novel is about a young woman growing up in a devout Jehovah’s Witness family and pushing against the tight confines of the faith while also noticing the cracks growing in her home life. I was immediately yanked into the book, a family drama which eventually turns into a psychological mystery. I read it, hungrily, in bits and pieces, grabbing ten pages on a subway ride and fifteen before falling asleep.

As much fun as it is to read popular and best-selling female authors like Margaret Atwood and Hilary Mantel, Watch How We Walk underpinned everything I’d hoped to accomplish by reading female writers. It was like swimming in a dark sea and finding a seashell. So often, we fall into the trap of selecting The One – the lone female writer who will have to represent all of us, the one who will snag the only available ‘token’ spot among the men, at the expense of lesser-known writers who will have to fight ten times as hard to overcome prejudice.

And there are other ways we feed into the trope of male legitimacy. While reading Nancy Kress’ sci fi novel Beggars in Spain, about a future America where wealthy parents can pay to genetically engineer children who never need to sleep, I kept thinking that if Philip K. Dick had written the book it would have been adapted into a big-budget Hollywood movie already.

Every person who chooses to read books by women this year is a victory, no matter to whom go the spoils. Their money chips away at a book advance and helps convince an editor that she made the right call. Their online reviews give a young marketing assistant something to talk about in her next big meeting. Each reader is a small voice saying, what you have to contribute is important, what you have to say matters. For a woman, that can make all the difference. The chorus is just getting louder.

I recently connected with Dr. Anne Boyd Rioux, a University of New Orleans professor who is working on a book about Constance Fenimore Woolson, a largely-unknown writer from the 19th century who was friends with Henry James and may have inspired Isabel Archer in The Portrait of a Lady. After she read my piece, Dr. Boyd Rioux and I met up for tea and a discussion about why Woolson’s works went ignored even though she was quite successful and popular in her lifetime. And the sad fact is that in 2014 women still have to push to get their writing read, as much as they did in 1914 and in 1814. As long as high school teachers don’t assign Jane Austen because they think teenage boys won’t like her books and the average American only reads one book per year, women are still going to have to scream just to be heard as a whisper. But at least we’re screaming together. 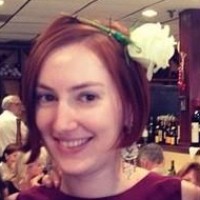 Lilit Marcus is the author of Save the Assistants (Hyperion), plus some stuff for the Wall Street Journal, Glamour, The Atlantic, and The Jewish Daily Forward. Her cat's name is Brisket.