In antiquity, Sappho was often called “the Tenth Muse,” but of the nine volumes she is said to have written, only one of her poems has survived intact.

The others are filled with gaps where papyrus has decayed, or are pieced together from lines quoted by other ancient writers. So for us, Sappho is defined nearly as much by the negative spaces between her words as the words themselves. And her poems, which so often bristle with desire for the unattainable, find accidental resonance in the way we read her — in seductive fragments, but rarely an attainable whole.

Every once in a while, another piece of Sappho turns up. This time, an Oxford professor named Dirk Obbink recognized Sappho on a piece of papyrus shown to him by an anonymous collector. In a paper describing the discovery, he writes that the subject matter, as well as the “metre, language and dialect…point indubitably to a poem by Sappho.”

Of the two poems on the papyrus, one is almost too fragmented to read, but it looks like a love poem. It’s addressed to “the Cyprian Queen,” that is, Aphrodite. The other one, which is remarkably legible, mentions Charaxus and Larichos — whom other ancient sources say are her brothers, though they aren’t named in any of Sappho’s other poems (that we have). The one translated here is missing its opening lines, so we don’t know who “you” is.

With a full ship. That much, I think, only Zeus

knows, him and all of the gods.

It isn’t right for you to think you know these things.

But send me as a messenger,

to offer many prayers to Queen Hera

with his ship unharmed

And find us safe. As for everything else,

let’s leave it to the gods,

For calm comes suddenly out of a great hurricane.

Those whose luck the Olympian King wants

to turn from pain into something better,

They are blessed and prosperous.

For our part, if Larichos could ever become a man,

We would be freed from much despair. 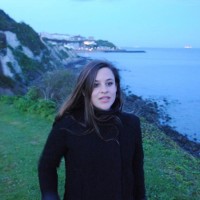 Annalisa Quinn is a books/culture reporter for NPR (who does some Ancient Greek on the side.)