In the town where I grew up, you couldn’t go shopping without running into someone you knew. It was the icing atop the self-conscious cake of adolescence, to constantly anticipate stepping out of the dressing room to show your mom some jeans and into the surprise judgmental gaze of a classmate. It meant burying tampons under the other Target items you and your mom were buying, hoping that the attractive theater boy ringing you up didn’t notice them. I’m not sure if it’s this specific history that leaves me, still, constantly looking over my shoulder when I shop for clothes, or if it’s all the other self-doubt inducing associations I have with getting dressed, or if it’s perfectly normal and common to feel that, as you try to figure out how you want to look, every single person on earth is looking at you.

I thought I’d moved beyond my days of Panicking in Northeast Iowan Malls. But lately I’ve been trying to look like I want to, like I’ve always wanted to, and the minute I cross the threshold into the men’s department it’s like I’m 13 years old again, convinced I’ll be caught where I’m not supposed to be.

Many of my friends identify as adult nerds, a common category of whom are boys who grew up feeling like failures at masculinity for loving Star Wars or Spiderman more than sports. What strikes me about this is that there are millions of these boys, and now grown-ups, and yet, so many of them still felt alone. And that the internalized expectations for how Boys Should Be are so powerful that liking movies about wars in space and vigilante ass kickers still didn’t feel masculine enough. I identify with the childhood anxiety of knowing that you’re not expressing your assigned gender as others wish you would. But I’m jealous of the Star Wars boys. They tell me about how weird they were growing up, and ask me, was I weird too? And I don’t know where to start, if even those little boys didn’t feel Boy enough.

I was assigned female at birth and identify as female, which makes me cisgender, which is important to say because even though I also identify as gender non-conforming and not into the binary (I’m not unhappy identifying as female, but neither of the two choices feel quite right), I benefit from innumerable privileges of being cis, as well as straight, every minute of every day. As a young kid, I was often assumed to be male, which I almost always preferred despite the collective discomfort it produced in everyone involved once the assumption was corrected. The knowledge that I was making both adults and children uncomfortable (except my family, who was supportive and great), that I wasn’t being who I was supposed to be– a girl– correctly, came as early as when I began to form memories. Kids at the playground would call me “It” and speculate about my gender within earshot. I got very good at solo monkey bar tricks.

Internalizing early on that I was a failed girl, I took my inability to be normal and ran with it. I lived in, and looked like, an aggressive rejection of reality. I watched black and white comedy shorts from the 1920s, Charlie Chaplin silent movies, and tap dancing musicals, and modeled myself after the leading men and boys of the 20s, 30s, and 40s. I wore suspenders, my grandpa’s old hats, and sweatpants pulled up to my knees to look like knickerbockers. The very real social failures of my life at school were easier to cope with as a movie star from the first half of the century. I didn’t ever feel like a girl, and this way, I didn’t feel like a failure. As the boy protagonist in the black and white landscape of my imagination, I was friends with all the kids on the block, dancing and building things out of trash.

Adults who wanted to support me gave me books about “tomboys.” All the representations of tomboys were girls who had two long braids and wore overalls. I hated the word, except the “boy” part. I wasn’t a long haired girl in overalls, I was a short-haired kid in boy’s clothes who couldn’t be a boy but most certainly was not a girl. I was a person being called “It” on the playground who was getting increasingly depressed, and the long haired tomboy girls didn’t make me feel better. The only other female person I ever saw who looked anything like me was Ellen, and when she came out toward the end of my time in elementary school, I thought for a while that I must be gay too since I had short hair like her (despite the relentless crushes on boys I’d had already for years, and would continue to have).

Right before 6th grade, high off the momentum of spending the summer on a trampoline with my brother and his friends, who were older and emotionally intelligent enough to be nice to the strange younger kid, I decided I would do what I was supposed to do no matter how difficult it felt. I bought tight shirts and flare pants and grew my hair past my ears. On the first day of school, I abandoned my usual post at the monkey bars and approached the most popular girls in my grade, whose recess activity was to walk the perimeter of the playground. I asked the leader if I could walk around with them. Incredibly, she said yes. That’s how I began following girls, trying to do it right.

Girls who wanted to be my friend wanted to help me get better at being a girl. Like a Bridget Jones-esque makeover montage, I let them burn my forehead with curling irons, poke me in the eyes with eyeliner pencils, and look me up and down in dressing rooms. I was so thrilled for the friendships I was convinced I enjoyed the forehead burning (my same friend, always burning me in the same place, before every quarterly Junior High dance, as reliable as the changing of the seasons). What began in early adolescence– genuine friendships forged through drag-like gender performance– continued well into adulthood. I’ve made wonderful friends through playing dressing up with them. The friendships are real, and even the girlness was real, at the time. I really do like skinny jeans, but I wouldn’t know unless my college roommate had dragged me to the Mall of America and made me try them on. And then, after, yelled “Damn, girl!” every day I wore them, until she had convinced me that I could feel cool and hot, and I eventually really believed it. To go from Fictional Leading Man Child to Girl Who Felt Confident was such a transition that I wasn’t sure if my old self was real, because I knew the new one was.

I told myself I was just a weird kid who’d learned how to be normal, that the problem had been mine.

“Make sure it looks like a girl haircut,” I desperately told the stylist when I got my hair cut short again, in college, the first time since my Leading Man days. I wanted short hair, always did, but there was urgency in my voice as I repeated the phrase to her. “Look like a girl, look like a girl,” repeated year after year to haircutters and myself.

If I had put the amount of hours I spent worrying about looking like a girl into learning how to tap dance, I would currently be an excellent, self-accepting, gender non-conforming tap dancer. As it is, I am a 27-year-old who has only recently realized that, if the friendships I made through playing dress-up are real, I can stop being terrified that everyone will disappear. And I can dress myself.

I’m not sure what that means yet, but so far it’s been a lot of working through feeling self-conscious in the men’s department, simultaneously feeling comfortable in a way I’m not sure I’ve felt as an adult.

“Ms. Molly, you look like a boy,” one of my students said to me last year. The familiar words, coming from a first grader, made me briefly flash back to the playground and my lone post at the monkey bars. Momentarily, I was hurt, hearing the phrase that had always been used against me, until I realized that the little kid saying it had no maliciousness in his voice. “Are you a boy?”

“My name is Ms. Molly,” I said. He didn’t interpret it as an answer. “If I was a boy wouldn’t my name be Mister Molly?”

“But you have boy hair and boy boots,” he explained, pointing to my snow boots.

“What makes them boy boots?” I asked.

This particular boy has a girl twin, which I ambitiously hoped had endowed him with internalized knowledge that gender is largely influenced by socialization. Not yet.

He was satisfied, and so was I. 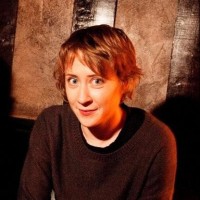 Molly Knefel is a journalist, writer, and co-host of a daily political podcast called Radio Dispatch. She also teaches after-school at an elementary school and a middle school in the Bronx.