A haunting travelogue of one man’s failed attempt to bridge the unbridgeable gap between nature and civilization ending in tooth-and-nail tragedy, but you’ll also laugh your head off every time Werner Herzog pronounces the word “bear” or “murder.”

Batman & Robin (Schumacher, 1997)
Yes, Robin is played by the world’s oldest “Boy Wonder,” Alicia Silverstone should’ve dyed her hair red, Arnold’s ice puns aren’t very…cool, Bat nipples, etc. If it seems an artless counterpart to what Christopher Nolan can tell you through Christian Bale’s constipated growling, by all means turn your head. But consider the premise of the source character, this adult billionaire who dresses like a dominatrix so that he can punch street youths and psycho clowns in the face. No amount of amateur psychology could change that, so why not run the other way and let your gut decide which Bane is sillier?

Twin Peaks (Lynch, 1990)
Mr. Lynch remains the unchallenged maestro of signifying everything and nothing at once—Blue Velvet’s severed ear as an allegory for small-town seediness, got it; Ben Horne waxing orgasmic over a butter and brie baguette, uhhhh—and Twin Peaks is his peerless, formless masterpiece. It’s a murder mystery, but not really—a premise that would damn The Killing some 20 years later, and force Lynch out of the director’s chair a few episodes into the second season when it became clear he’d rather stage a dozen dwarves improvising be-bop than answer the simplest question: Why? Bless your heart for trying, but you’ll never know.

Water-activated gender-shifters, plucky sidekicks, protagonists who may or may not be the hero long prophesied to end this mess, wish-granting dragons, sentient skyscrapers, robot slowly learning to love, latent psychics with inferiority complexes, leaders of neo-futuristic motorcycle gangs, time-traveling swordsmen, precocious youths on a mission to save the world, playing cards containing mythical creatures, red-and-white balls containing adorable creatures, rapping samurais, alchemy-performing tweens, karate masters who can produce fireballs with their hands, just about every type of talking animal you can imagine.

John Carter (Stanton, 2012)
Fun for the whole family, from the younger brother who still hasn’t gotten over Star Wars to the mother you learned has taking your pot when you’re away at school. This hilarious slapstick comedy stars Taylor Kitsch as a Civil War general who’s transported to Mars and finds he’s developed superpowers just in time to get involved with a massive conflict between good and evil. Smoking hot humanoid alien babes? Martian natives who somehow speak English? A lore-heavy, incomprehensive mythos none of the actors really commits to explaining? Check, check, check.

Supernatural (TV series, 2005-present)
A masterwork in method acting: Two ultra serious, square-jawed Hollister models fight supernatural crime and say things like “looks like the ghost dog won’t stop terrorizing the Native American museum until we put it down with these papally-blessed shotguns” without betraying even a hint of a smile.

You were twelve years old sitting splayed-legged in fourth period library when Mrs. Carson, eager to rush through the week to a spring break promising a long-planned trip to Cancun with Mr. Carson popped the first tape of this Kubrick classic into the classroom VCR and kicked her feet back on the table as it rolled. You didn’t understand when the monkeys were supposed to be alive or what the obelisk was, instead wishing she’d put on something else you were already in love with like Blade or Reservoir Dogs (still). But you thought it was kind of cool when HAL was shut down (symbolizing man’s ultimate triumph over machine, a theme you’d been mulling over while waiting for the Matrix sequels to be released), and when the day-glo light show at the end spilled from the screen and onto the darkened room, splashing Hannah McClelland (your crush seven years running) in pink and blue tones that only magnified her still-impossible-to-decode allure. You were fifteen at the inaugural meeting of the Maitland Tech College Preparatory Film & Television Club when, hunting for recommendations from the back of your head, you suggested to the few who’d shown up that they watch all 161 minutes of the seminal science fiction film at some point in the future, right after Michael Tannenbaum suggested Spider-Man 2 and Rosie Hunter suggested A Walk to Remember. Mr. Rodriguez, although receptive, was forced to retreat when twelve minutes into the screening several hands shot up and calmly demanded that he swap the Dolby remastered edition for something more palatable to the teenage taste, which ended up being Anchorman. You walked out in silent protest and never returned. You were nineteen years old when you masterminded the brilliant idea of inviting Kelly Schneider over to your dorm room to “watch a movie” with far saucier, secret intentions, hoping that you’d be able to dazzle her with the amateur insights you’d picked up from film textbooks re: Kubrick’s creative process and the way they’d gotten the pencil to float through the space shuttle untethered by gravity before she, madly romanced by your unparalleled insight, placed her hand on your thigh etc. somewhere in the second act. As it turns out, Kelly was far more assertive than your candy-ass and got down to brass tacks pretty much the second she walked in, which you kept replaying in your head a week later when she sent you a text saying it was nice and all but you’d better stick to being friends. (What clued her off that I had no idea what I was doing? you wondered and never found out.) You were twenty three sitting in the recessed plush of a Bushwick armchair as your friend loaded the Blu-Ray of this cinematic landmark into his Playstation 3 and promptly began fiddling with his phone for the next hour, looking up only slightly every time you protested that one could hardly pay attention to a nearly wordless film with his head buried in Words With Friends. “Boy,” his girlfriend said, “You really like this movie, don’t you?” You are twenty-seven, watching your new roommate cart his boxes into the old roommate’s place and taking an eager seat on the lip of his bed as he begins to roll an introductory spliff. He mentions that you should watch a film sometime. You’re just hoping you can finally get through the whole thing.

Speed Racer (Wachowskis, 2008)
Wait, your friend whispers, If Christina Ricci plays Speed’s girlfriend, then why does she call his dad “Pops”?

Uh, you respond after a moment, I think his name is actually Pops. Pops Racer. Father to Speed, Spritle and Rex, husband to Mom—or is that Moms Racer?

A pregnant pause hangs in the room. Man, what the fuck are we watching?

Illustrator Credit: Roxanne Palmer (alias Roxy Drew) is a cartoonist and science journalist. You can see her stuff at roxydrew.com and roxydrew.tumblr.com. 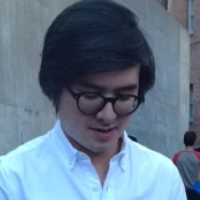 Jeremy Gordon is a writer and editor living in Brooklyn.