Locked in a bitter competition with Crayola and 3M, the Mr. Sketch marker company was searching for an edge to corner the elementary school coloring market. The brightest minds in the marker industry were assembled to design the new product, and the resulting innovation was destined to change the business forever: Mr. Sketch Scented Markers. The only problem was figuring out which smells would go with each color. For the first time ever, we are privileged with a raw behind-the-scenes look at some of the most important discussions in the history of grade school arts and crafts: the flagship Mr. Sketch 12-pack.

The following transcript involves a board room discussion between Mr. Sketch executive Head Suit Stevens, and his project team, Boggs, Jeff, and Marty.

Boggs: God, I love the smell on that blueberry sample.

Jeff: Marty, you look like you’re having second thoughts.

Marty: It’s just…are any of you guys worried that kids are going to smell these markers and think that they’re food? And then take a big bite out of one of them and get really sick from it or something?

Marty: I don’t want that on my conscience.

Head Suit: If it makes you feel better, we can stamp ‘Non-toxic’ on the outside of the box.

Marty: Are they non-toxic?

Head Suit: I have a feeling purple is going to be huge for us. We need to really nail this one. I vote for grape.

Head Suit: Now, yellow is a tricky one. You can go banana, or you can go lemon. I’ve seen this thing done both ways, so we want to really put some thought into it.

Jeff: Banana worked out pretty well over at Laffy’s.

Boggs: Laffy’s is bush league. We’re trying to appeal to a more discerning consumer demographic. Think about it, yellow Skittles…lemon. Yellow Starburst…lemon. Yellow Jellybeans…lemon. These are some high end companies, and the market seems to be trending towards lemon.

Marty: Why isn’t “Yellow Apple” ever used as an artificial flavor?

Head Suit: Okay, let’s see, what should brown be?

Head Suit: Sure, Marty, you can go ahead and prepare the different test samples. Idiot.

Marty (mutters): Like it would be any worse than black licorice.

Boggs: What about cinnamon?

Boggs: But I can’t think of any fruits that are brown!

Boggs: THERE IS NO BROWN STARBURST.

Jeff: Oooh…there should be. We’ll come back to brown.

Head Suit: Quit acting like you’re part of this, Marty.

Boggs: Have any of you guys seen the prototype for the box that these markers are going to be sold in? My buddy in packaging showed me a sneak peak, it was kinda weird.

Boggs: Well there was this cartoon watermelon guy that was like the main focus of the entire box! I don’t object to pink being watermelon, but that doesn’t seem right.

Head Suit: Don’t waste your breath arguing that one. It’s an order coming straight from the top, and it’s non-negotiable.

Head Suit: Greater men than you have been fired for even thinking that question, and that’s Packaging’s problem now anyway.

Head Suit: Gentlemen, we’ve got ourselves another toss-up here with red. Jeff, you’re Lead Nose on this operation, what smells better: strawberries or cherries?

Head Suit: That’s why we pay you the big bucks, Jeff, it’s for calls like that!

Marty: What about raspberry?

Marty: Why don’t you guys ever use any of my ideas?

Head Suit: Because we all know you’re a talentless hack who only works here because you’re Mr. Sketch’s nephew.

Boggs: There’s always sour apple. Nothing earth-shattering, I know, but that’s usually what the candy firms go with when they need a quick fix for green.

Jeff: Sour apple isn’t a very inviting smell though. Plus, we’re not candy.

Boggs: We’re sort of like candy. Except you smell it.

Head Suit: Let’s not refer to it as that ever again.

Boggs: So sour apple is out, if I understand correctly?

Marty: What about grape?

Jeff: We already DID grape!!

Marty: Well, it would still be open if you guys hadn’t shot down plum!

Jeff: You know what has a nice, smooth aroma? Mint.

Marty: Mint’s not a fruit!

Jeff: Sure it is!

Boggs: Uhh…maybe we ought to have two greens in there then; one mint and one green apple. Just to play it safe.

Head Suit: I think it’s time to buckle down and revisit this brown issue.

Jeff: Hey, what about coconut? Coconuts are brown, aren’t they?

Head Suit: Only the shell. Our market research indicates that 58% of marker consumers associate with the white fruit on the inside when they think of coconut.

Jeff: Oh, drat. Boggs, you getting anything from the research team?

Boggs: Tree limes! It says right here, “can be found in red, blue, and brown varieties!”

Head Suit: It will never work. People aren’t going to associate limes with any color except green.

Marty: Limes! That can be our fruit for green!!

Head Suit: I already wrote MINT on my legal pad in capital letters, I’m not changing it now.

Head Suit: Don’t worry about it.

Boggs: Hold on a second, Stevens. The whole black licorice thing seemed to come out of nowhere; and you wrote it down awfully fast, I don’t think we’d  even reached a consensus on it.

Head Suit: Well…it’s a scent thing. Jeff, you know what it’s like, I think the chemists would have a really difficult time capturing the proper blackberry essence. It’s a tricky formula…very costly and time-consuming to figure out.

Boggs: Well we can certainly do better than this. I mean, we’re supposed to be leading innovators of the industry, and this thing smells worse than a black Sharpie.

Marty: I actually really like the smell of Sharpies.

Boggs: So do I, now that you mention it.

Jeff:  Let’s just have ‘black Sharpie’ be our scent for black!

(The project deadline is fast approaching, and tensions run high as the crew frantically tries to finish the set)

Head Suit: Okay quick, give me something for turquoise.

Head Suit: Got it.

Marty: Mangos aren’t even close to being turquoise.

Boggs: They don’t need to be. This thing is due in 10 minutes, and we still don’t have anything for brown!

Head Suit: How about chocolate?

Jeff: Chocolate is more of a crayon smell.

Head Suit: You’re right. I still vote for cinnamon then.

Marty: Still not a fruit.

Jeff: I’m sorry guys, it’s been a long day. I’ve got nothing left.

Head Suit: And we have no time left. We’re just going to have to do cinnamon.

Marty: What should its little logo icon be then?

Head Suit (sighs): Put a stupid cartoon bear on it for all I care. At this point, it won’t make any less sense than the rest of this crap. Just get the final draft up to his desk.

Jeff: All I can say is, Mr. Sketch is not going to be happy about this.

(20 minutes later, heard from the office of Winthrop Sketch) 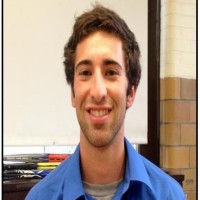 Payne grew up in Harbor Springs, Michigan and currently lives in Boston. He works in sports-based youth development.