Sherlock Reviews Musicals He Was Forced To Attend With His Parents

Sunday In The Park With George

This play began with some promise. I liked the part about the genius doing brilliant work based on scientific principles that nobody around him has the capacity to understand. But then everybody started bothering him about his emotions and singing about loving him all the time and I lost interest.

I was once beaten with a lead pipe in a Turkish prison. If given the choice between returning to that chapter of my life and seeing Cats again, I’d pick the lead pipe with a smile.

How To Succeed In Business Without Really Trying

I had high hopes for this one, because how would one succeed in business without really trying? The answer, of course, is murder. My first thought was poison: why else would such attention be drawn to the coffee, in the song about enjoying a coffee break, of all things? A bit simplistic, but neat. However, as the time passed for the majority of easily obtained poisons of the era to possibly take effect, I began to suspect that a more tangled web was being woven here. You can find the most twisted men behind the most unassuming faces, and there was something about the naivete of Finch, the ambitious window washer, that whispered a suggestion of the psychopathic in him. As the young man ingratiated himself with his employer J.B. Biggley, claiming to share his alma mater and his hobby of knitting, I suddenly began to see the pattern. He was becoming his enemy, laying the psychological groundwork to drive Biggley to madness and death, and ultimately take his place. A worthy problem indeed! Then it turned out to be a tedious blackmail thing about a girl and I’m still smarter than everyone alive, so then I fell asleep.

It’s a logic problem. Most things are. Good god, any fool could have figured it out in the first act. There are seventeen dancers called back, eight “boys” and nine “girls,” as they say. So which nine are on the chopping block? Well, Zach lets Diana sing about her drama school experiences uninterrupted, and nobody wants to hear anybody talk about drama school unless they want to sleep with them on at least a subconscious level. Safe. She’s in. Good. Now, look at Don. The actor’s shoes look almost new, they show the least wear-and-tear of anyone on the stage. He’s clearly not going to be doing any choreographic heavy lifting later in the show. Doomed. At first I thought Kristine was a red herring, making such a big show of her inability to sing, but one look at that atrociously sickled foot and you can tell her dancing won’t compensate for her vocal incompetence. Goodbye, Kristine. Maggie studies ballet because she used to pretend her father was an Indian chief who would dance with her, which is nonsensical. Her mind is weak. She will fail. I can’t remember the name of the other girl in the song so she’s probably not important. Look, have I really got to spell it out for you? I’ll tell you the final eight, and you can give me forty-eight quid to tell you easy riddles for two hours.

I spent the entire first act enraged that I wasn’t sitting close enough to the stage to study the ash from the characters’ cigarettes and thus prevent the evening from becoming an utter waste of brainpower. The terrifying old dishrag of an usher wouldn’t let me walk up the aisle, so during the intermission I lifted a pair of opera glasses from a lady in row G. I had little remorse, as a quick glance at her fingernails clearly proved that she had been accepting bribes from an Iranian prince up until two weeks ago. Alas, though – by the end of the first verse of “Shakin‘ At The High School Hop”  I visually confirmed that none of the cigarettes were real. Why does this musical even EXIST, then? I hated it.  No stars.

The Phantom Of The Opera

Someone really ought to break it to the Phantom that if he listens closely, he can hear that Christine is in the early stages of developing vocal nodes, so he might not want to go through all this trouble to kidnap her if he’s either going to have to pay for some expensive throat surgery or hold auditions for an entirely new “angel” in six months. Let us hope Christine has some typing skills or something to fall back on, for her sake.

And, let me say this: just because you’ve got an underground lair doesn’t mean you must decorate it like you’re Dracula running a bordello. I’ve seen some that are quite tasteful. I wouldn’t be so indiscreet as to name names, but trust me, it’s possible.

I rely on my mind as my instrument and my only faith is in its power, but several days ago everything I thought I knew crumbled as I looked into the face of madness. My mother called to tell me she bought me a ticket to see Les Mis with her and Dad even though they had already seen it once before themselves. Assuming that she was having a stroke, I met the ambulance at my parents’ house, where she made the paramedics tea and told me that Mycroft, damn his eyes, told her that I’d like it because, quote, “there’s an incompetent policeman in it.” After several unsuccessful attempts to fake my own death (I’m usually fairly deft in that area but mothers always know), I found myself sitting there with a Playbill and an overpriced sack of M&Ms like a fool. The play was overwrought, saccharine, full of the emotions that make men weak, and I stand by my belief that the mind is superior to these little caprices. . . but I did like the part where the lawman was pompous and bad at his job then realized that he wasted his life and jumped off a bridge. Also, I think I should like to spend some more time in my local sewer system. But that doesn’t mean that Her Majesty won’t be getting some rather vivid pictures of the male anatomy from Mycroft’s email account tomorrow.

Hmm. Yes, well. It was fine. Fine! I could see how a person of ordinary powers might find it amusing. If you like that kind of thing, you know, elaborate conspiracies and vengeance that plays out over decades. And, of course, madness, and betrayals from lethal female accomplices and cannibalism and political corruption and a brilliant, deeply FIENDISH, intricately constructed MURDER CHAIR . . . That kind of thing. Hmm, well, obviously that’s not my sheet music. I bought it for John. I mean, of course I’m aware he doesn’t play an instrument, I just thought it’s the sort of ridiculous thing he’d like. I, you know, it was . . . fine. 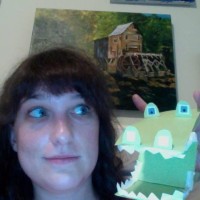 Kathryn Funkhouser's work has appeared in The Atlantic, The Nation, and the Hairpin. She lives in Brooklyn, where she writes for theater as well as a new series for the web, Wonder.