Lady in Red: A Celebration of Audrey Horne

One moment brash and blunt, the next vulnerable and venal, Twin Peaks‘ Audrey Horne is one of the most complex characters ever to grace a television screen. Her entire essence can be captured by her infamous assertion, “I’m Audrey Horne and I get what I want.” From the second we’re introduced to Audrey (played to perfection by Sherilyn Fenn), she exudes confidence and sensitivity. Setting her sights on the elusive Agent Cooper (Kyle MacLachlan), she approaches him with calculated politeness and lets it be known that her father, Ben Horne (Richard Beymer), owns the Great Northern Hotel. Cooper, as a current resident of the hotel and lover of their coffee is, of course, impressed. It’s just one in a string of many cases in point of the philosophy of Audrey Horne: attracting attention through a delicate combination of subtlety and apparentness (please enjoy the following clip of her eating a cherry.)

Audrey’s fascination with Agent Cooper is a great example of her simultaneous innocence and baseness; she lusts after the dashing, handsome special agent while knowing in her heart that nothing could ever really happen between them. As she takes great pains to get Cooper to notice her, one of her most self-sacrificing acts during the series is to go undercover as a “lady of the night” at One-Eyed Jack’s, a gambling and sexual getaway owned, incidentally, by her father. The chutzpah it takes for Audrey to pose as a One-Eyed Jack’s employee shows a level of bravado that most of the other characters on Twin Peaks simply do not possess (except perhaps Laura Palmer, and look where she ended up.) Her comportment upon actually being accepted by the madame of the establishment, Blackie (Victoria Catlin), reveals that, beneath the surface, she is far more insecure than she lets on.

Her apparent defenselessness in the face of being trapped amid the web of deceit contained within the walls of One-Eyed Jack’s is counteracted by her innate shrewdness and survival skills. When she learns that her father is coming to check out “the new girl,” she decides to play the coy virgin by putting a mask over her face and claiming to be shy. The ploy initially works against her because her own father is aroused by her standoffishness, but it ultimately stalls enough time for Ben to be called away on another errand. Audrey’s ability to think on her feet exposes her intensive street smarts and a wisdom beyond her years. Though, unfortunately, this maturity isn’t enough to convince Cooper of her as anything other than a friend.

As for Audrey’s pragmatism, which does exist in spite of most viewers associating her character as sexually appetitive and prone to whimsy, she is at her fairest and most balanced when discussing Laura. After Laura’s funeral, Audrey goes to the RR Café, puts on a sinister, yet sultry song (another dichotomy indicative of the Audrey Horne way) and sits down at the counter to enjoy a cup of black coffee, in her newfound appreciation of all things Agent Cooper-related. Laura’s best friend, Donna Hayward (Lara Flynn Boyle), notices her from afar and goes over to ask her what she was doing at Laura’s services earlier as she had always assumed Audrey hated Laura. Audrey serenely replies, “There were things about Laura I didn’t like, but she did help take care of my brother Johnny. I guess I sort of loved her for that.”

Beyond Audrey Horne’s persona, there is also the Audrey Horne aesthetic, which echoes her binary nature. In many early episodes of the show, she wears pleated plaid skirts with three-quarter sleeve pullover sweaters that hug her chest just so. Saddle shoes complete a decidedly schoolgirl look, but somehow, there appears to be nothing innocent about her. And it’s all rounded out with scarlet red lipstick—her trademark.

Perhaps what makes Audrey’s vigor and sense of self seemingly tenuous at times is her textbook father issues. Her desire for his approval and attention is unabashed, even though she knows he’ll probably never love her as much as she wants him to (a statement that also applies to Agent Cooper, conjuring the term “Electra complex.”) Ben Horne is, in fact, a key piece of the Audrey puzzle.

Ben Horne’s affair with Laura is a source of psychological trauma for Audrey, who vacillates between acting like an impregnable, tough-as-nails adult and a wayward, lost little girl. Before Audrey ever confirms Ben’s relationship with Laura, she intuits it, even casually asking Donna, “Did Laura ever talk about my father?” Audrey seeks attention from Cooper in a similar fashion. Before he’s headed to Laura’s funeral, he asks Audrey to join him for breakfast and pays her a rare compliment, “Audrey, that perfume you’re wearing is incredible.” Elated by his notice, she pushes, “Do you really think so?” He assures, “Yes, I do.” It’s obviously enough to get Audrey through her day.

The similarities Audrey shares with Laura are another facet to consider when examining Audrey’s philosophy. Her devil-may-care approach to life is very much in line with how Laura lived, albeit with a little less abandon. Audrey even feels inclined to confide in Cooper, “We weren’t friends, but I understood her better than the rest.” Laura had a wild child, vixen-like quality that Audrey has just as much difficulty concealing. In Season two of Twin Peaks, her older love interest, John Justice Wheeler (Billy Zane), is a symbol of the good and evil warring within her (not to mention all of Twin Peaks; see: White Lodge vs. Black Lodge.) Even though she knows John is an inherently good man, she also can’t ignore the taboo of pursuing someone so much older. This doesn’t stop her from losing his virginity to him on his private jet. And even though she knows she’ll probably never see him again, she has to throw caution to the wind in the moment, for that’s who she is and that’s all she can do. It harkens back to Cooper’s original warning, “That rightward slant in your handwriting indicates a romantic nature. A heart that yearns… be careful.”

In one respect, Audrey is that effortlessly cool girl who smokes cigarettes in the bathroom and dreams of a life of adventure, knowing all too well that there is a far more exciting world beyond Twin Peaks. At the same time, she’s also the girl who feels perpetually insecure, who can’t quite seem to find her place among the rest. It’s like she says in her prayer to Cooper at One-Eyed Jack’s: “To be perfectly honest, I think I’m in a little over my head. Not that I can’t handle it…” 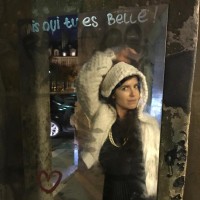 Genna Rivieccio writes for several pop culture blogs, including Culled Culture and Behind the Hype. She has lived in both Los Angeles and New York and feels that they're both two sides of the same sordid coin.