Looking for Ruth: A Family Story

When my mother was thirty-nine, her parents sat her down. It’s difficult for me to imagine her being seated like a child before her parents on a sunny afternoon, shifting uncertainly on an old sofa. Waiting, wondering; having not a clue what it was all about, not knowing how her concept of her history was about to experience irrevocable change.

My mother (who morally objects to the term ‘mother’ and adamantly prefers “Mom”) is a strong woman. Always has been. She grew up with the Beatles and social change and rock and roll. She was invited to Woodstock by a friend, though, to my eternal dismay decided to not to attend. She was married by twenty-two, and divorced at twenty-nine, which left her to raise my young brother and infant sister on her own. She delivered newspapers to make ends meet, driving up and down roads on early Sunday mornings with my sister asleep in the back seat and my brother tossing newspapers out the window. My mom put herself through a Masters program. She got things done. At thirty-one she met my father. At thirty-two they married. And at thirty-nine, just as they were deciding to have another child, my mother’s parents sat her down and they told her. They divulged the secret they’d been keeping, the secret apparently everyone knew but her: that her mother was not in fact her mother, not by blood anyway. Her birth mother’s name was Ruth. She died in 1950, when my mother was one and a half, and with her death a lie was born within our family, a lie that lasted nearly forty years.

The thing that struck my mother was that everyone knew, literally everyone, including her siblings. Her elder sister, who’d been a little older when Ruth had died, still possessed vague memories of those early years. Their younger brother, born to my grandfather’s second wife, Lillian, had done the math. Lillian was still overseas in the army the year my aunt was born. No one ever bothered to tell my mother, and she never questioned it. Who would? Who, after a lifetime, would question that her parents were her parents?

The reason my grandparents had decided to at last tell my mother the truth about her birth was that Ruth’s sister was dying. This woman, Edna, had taken my aunt and mother in shortly after Ruth’s death. Her own daughter had died years before and she welcomed in her nieces, even going so far as wanting to adopt my mom, a sweet little baby in whom she saw her second chance. My grandfather said no. They had fought, and hadn’t spoken since, but my grandfather remembered her in the end, and understood the way she’d felt; respected it, maybe, because when she was dying in the hospital he saw fit to tell my mother, and in doing so was forced to explain her connection to this woman, the last link to Ruth.

Shortly after my grandparents revealed the truth, Edna passed away. This left my mother with a head full of questions and no end in sight. Lillian hadn’t known much about Ruth and my grandfather, who’d spent so many years suppressing that part of his life, and could barely remember (or didn’t want to.) It’s difficult to know what he did or didn’t know by that point. He was a kind man, a good father. He kept a lot in; in their family, you were raised not to discuss certain things. And so, when my mom went to him with questions, he didn’t have many answers.

The first step in my mother’s quest to connect with Ruth was to name a child after her. In the Jewish faith, it is custom to honor the dead by passing their names–their identity–on through the generations. When I was born, my parents gave me the middle name of Ruth. I’ve always taken pride in that. There is not another person in the whole of my family named after her. And so I’ve always felt a weight in my name (a responsibility, even), living for a woman I had never known. Honoring someone who’s existence had led to that of my mother and of me, but of whom we knew so little about.

Shortly after I was born, my mom started looking into the past, asking the questions no one wanted asked. She managed to uncover a few fragmented facts that had not completely disintegrated with age. Ruth Somer had been born Ruth Hollander to parents Joseph and Pauline. Both were Polish immigrants who’d traveled to America separately at the turn of the century. Joseph settled in New York and through his first marriage had a son, Edward. No one knows what happened next, whether that marriage ended in divorce or death, but, in 1905, Joseph and Pauline were married and Pauline gave birth to their daughter, Edna, and to Ruth a few years later.

Ruth was born in Clifton, New Jersey in 1914. She attended Clifton High School and married my grandfather, Irving Somer, sometime in the thirties. Little else is known about her. Imagine that! A person exists on this earth for thirty-six years, has a family and children, and upon dying is lost to all memory. How fleeting, how terrifying it seems, to slip so easily off the map. What strikes me are the little things we’ll never know about the woman: her favorite book, her handwriting. What it was that first struck my grandfather about her; made him fall in love with her, and her with him. My mom, for whom this loss hits closer to the bone, locates her feelings of isolation growing up, of longing, in the idea of Ruth. This is the mother she’d never known. A woman who loved her, and who’d been taken from her so early on and under such vague circumstances. She’d always felt as if something had been missing in her life. and now she knew why. My grandfather died in 1999 and any remaining knowledge of Ruth apparently died with him.

He had one photograph of Ruth in his possession. Today it sits on a shelf in my mom’s house. It shows Ruth standing out in the yard with my aunt beside her and my mom just a little bundle in Ruth’s arms. We don’t know what happened to the other pictures, or her possessions. My mom thinks she has her Ruth’s wedding ring. When I was an infant, my grandmother, Lillian, gave me a box of old jewelry to play with. My mother took a ring out of my hand and said that it looked like it was real gold. My grandmother replied that it might have belonged to Ruth, and if she was not mistaken, it had been Ruth’s wedding ring. My mother slipped the ring on and was pleased when it fit. From what we’ve been told, my mother and Ruth shared the same build, and so they probably had similar fingers. To this day my mother wears that piece as her own wedding ring. It doesn’t even come off anymore.

As little as we know about Ruth’s life, there is even less to be known of her death. In July of 1948, Ruth and her two young daughters went to vacation with Edna in Fallsburgh, New York. My grandfather had work during the week and was set to meet them there for the weekend. Before he could arrive, Ruth collapsed and died of what was deemed a heart attack, though no one has ever claimed to know that for sure. We’ve often speculated within the family, particularly my mother and I. She believes the heart attack story, though, with my writer brain, I’ve always wondered if was more complicated or sinister than that. On occasion, I’ve even joked that perhaps the woman was a spy and faked her death to flee the country. My mom likes to laugh at this theory, knowing it to be untrue and yet wanting, so very much, for a part of it to be real, and for Ruth to somehow be alive.

My mother has taken ancestry courses and attempted to research the Hollander family on and off for years now. In November of 2013, I suggested my father get her membership to one of the ancestry websites as a holiday present. My father, who’s always struggled to find her gifts (everything he buys her is heart-shaped), agreed that it was a good idea and decided to go through with it. My mother was pleased, though, in truth, her internet skills are rather limited, and going through websites with her is comparable to walking a tightrope after excessive sleep deprivation. I’ve ended up using the ancestry membership more than her, which seems to suit everyone in the family fine, as I’ve managed to find a few things: Ruth’s name on a census, her father’s signature from when he came into the country. Supposedly, Ruth’s brother Edward had children somewhere along the way, but we haven’t been able to locate them.

The crowing achievement of my endeavors has been a photograph from the Clifton High School Yearbook in 1931. In it sits a young Ruth, nearly eighteen. Her brown hair is short, and she has one of those reserved smiles teenagers often wear when forced to pose for photographs. She looks like my mother, or, I suppose, it is my mother who looks like her. Beside the picture is Ruth’s name and her preferred nickname “Ruthie,” along with her senior year quote and her hobbies and activities: reading, sewing, skating, Footlights Club, Library Club, Glee Club, and Business. I thought Footlights Club had to be some kind of obscure light show or maybe a form of ballet, but apparently it is actually what they called drama club back in the day. I did theatre and drama from ages five through eighteen and so I’ve always liked that little fact, as if it is something I inherited directly from her. Both my mother and I have always been big readers and so that seems to be something else that might have come from Ruth. For as little as we know about her–as little physical evidence exists of her lifetime–there is always us. 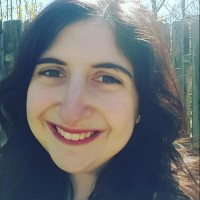 Emily Ruth Verona received her Bachelor of Arts in Creative Writing and Cinema Studies from the State University of New York at Purchase. She lives in New Jersey.