Nicole Dieker last taught The Toast how to tell if you are in a Noel Streatfeild novel.

In the video, I’m seated behind an electronic keyboard with a few pairs of shoes balancing out the shot. I’ve brushed my hair until it shines even in the lack of light; I know enough to aim a lamp at my face, but I haven’t yet invested in a professional setup or, in fact, in a camera better than my little Flip, which is balanced on a stack of books to get it to the right height.

The camera is on. I’m practiced enough, now, to do this in one take. I start feeding a rhythm into the keyboard and then, gesturing to the pairs of shoes next to me, I begin rapping.

“This is my ode to Crocs, just smell the eau-de-Crocs!

Don’t have to wear any socks, when I wear them down the block, people gawk and they stalk me ‘till they get me to talk…”

I ended up sending that video to Crocs, of course. And, to my credit, so did my fans. It was the fifty-first song I put on the internet, at a dedicated, constant rate of one song per week. I was trying to become a YouTube superstar.

It makes sense that when “YouTube Entertainer” became a viable career path, there would be young people who attempted to pursue it. After all, we saw people just like us, with similar talents and skills, grow their fanbases and slowly expand into t-shirts, public concerts, VidCon appearances, record deals, and all the rest of it.

In the video, I’m wearing a blue TMBG t-shirt and rolled-up jeans, and I am sitting on a table. I’m explaining to my future fans that this video will be the first in a series, and that everything I write will be released under Creative Commons, which means that it’s okay to use my songs in remixes and student films and — yes, I said this out loud — “make Machinima videos out of them.” The webcamera blurs my features. I’ve only owned my guitar for four weeks. I am going to be successful, because the odds are on my side.

You’ve probably heard of Jonathan Coulton even if you haven’t heard of Jonathan Coulton. He wrote Portal’s “Still Alive,” and the cover of “Baby Got Back” that was stolen by Glee, although what he’s really famous for is putting 52 songs on the internet and coming out the other end as a full-fledged rockstar. He’s one of the reasons why I did this project, and why I called it “Hello, The Future!” — the idea that you could choose to post 52 songs and, by doing so, transform yourself into something new. He’s also the reason why I announced, in my first video, that it was okay to use my music for World of Warcraft Machinima fanvids.

No one has yet taken me up on that offer.

In the video, I’m wearing a blue Dinosaur Comics t-shirt and jean capris. I’m still sitting on the table and won’t stop until it breaks during Week 31. But this is Week 10, and I sing an original song called “T-Rex Has Feelings,” and the next day Ryan North of Dinosaur Comics retweets and reblogs it, and I am going to be successful because it only took 10 weeks to get this far.

When you look at the people who become YouTube superstars, you can always pinpoint that one specific video that catapults them out of the noise. Hank Green’s “Accio Deathly Hallows,” for example — it hit the front page of YouTube, and a day later Hank Green was Hank Green. Everything that followed, from the Lizzie Bennet Diaries to Crash Course/Sci Show, can be traced back to that single song.

Or at least that’s what I thought, when I started putting music on the internet. And yes, ten weeks into the project I wrote a song called “T-Rex Has Feelings” that got reblogged and retweeted and stumbled-upon, and helped me get my first convention gig, and led to hundreds of album purchases down the line.

But it wasn’t precisely that, that makes you a star. Not a single video after all, not even one retweeted by Ryan North.

In the video I am wearing a red sundress over leggings and still sitting on the table because it hasn’t broken yet. I’m thanking Intervention for giving me my first convention performance opportunity. I already know it will be the first of many.

Getting convention gigs turned out to be relatively easy, especially when your first gig is Intervention, which is one of the best places for new artists to build their skills. Intervention founders Oni Hartstein and James Harknell are masters at helping talented people network and get jobs. I used my performance there to book additional shows and performances, taking time off work to begin my travels around the country.

All of this led me to believe that I was on a collision course with success; that we were running parallel down different lanes and any minute it would crash into me and change everything. I was going to be a nerd rockstar. I already was a nerd rockstar. I just needed to pull myself out of the noise a bit further.

In the video I am wearing a blue dress and a gray canvas jacket. My hair floats around my shoulders as I dancedub. I am announcing a new project: a compilation album called Mink Car Cover, created to benefit the FDNY Foundation and featuring all of my favorite musicians: MC Frontalot, Marian Call, Molly Lewis, The Doubleclicks, Mustin, Brentalfloss, even Hank Green himself. And me, me, me, me, the last track on the album is mine. I am going to be successful because I already am successful. Ryan North designed the album cover. Everything I ever wanted is already here.

A year and four weeks into my plan to become an internet musician, I became part of Mink Car Cover. It is, by far, the best thing I’ve ever done both creatively and collaboratively. It, among my work, stands the test of time — that dancedub video does not, and I can barely bear to look at it, with my overtrained theater school voice saying “This is our project” and turning “our” into a two-syllable word.

Mink Car Cover is an amazing album, and my track is so very very very obviously the worst one in the set. That was okay when it released in 2011; I was just getting started. But the gap between my talent and the talent of the other artists who surrounded me would continue to grow.

In the video, I announce an album.

In the video, I announce a Kickstarter.

Here is a list of the things that happened to me, in my journey towards Internet Fame: I put a new song on YouTube for 100 consecutive weeks. I developed a small but dedicated fanbase. I quit my job and toured the country performing at conventions. I was asked to be the keynote speaker at the music+gaming festival Rockage. I had a professional residency at a bar in Los Angeles. I opened for the cast of Babylon 5 in Phoenix. I got to work with, or open for, many of the musicians whom I most admire. I released five albums of my own, including a full studio album funded by a Kickstarter.

And I failed. I spectacularly, brilliantly, beautifully failed.

I didn’t fail because I ran out of money, although I did run out of money (touring costs everything you’ll earn and more). Nor did I consider myself a failure specifically because the man who produced my studio album told me quietly, after it was done, that maybe this was not my strength. I failed because two things happened that I didn’t expect.

In the video, I’m at VidCon, in a white dress with red apples on it. Michael Buckley just told me that I had talent and should keep working. Tom Milsom knows who I am. I’m so close so close so close.

The first reason I failed was because I hit YouTube at right about the time when YouTube switched from highlighting homebrew webcam videos to pushing Sponsored Channels and series with professional-quality production values. At VidCon 2010, for example, my little Flip was “the official camera of VidCon.” A year later, at VidCon 2011, the panels were about integrating YouTube and Hollywood; the Flip camera, a “$590 Million Mistake,” was no longer in production.

I was smart enough to realize, when all of this happened, that YouTube was not going to be my way out of the noise and began to focus more seriously on the touring and performing aspect of my nascent career. This brings me to the second reason that I failed. The real one.

In the video, I have a red flower in my hair and a packed house hanging on my every word. I am on Jonathan Coulton’s actual cruise, the one named after him, and I am playing an unofficial “Shadow Cruise” show at audience request. I do not know yet that this is the last golden moment of my career as an internet musician; the last time I think that if I keep working hard I’ll make it to the mainstage.

Here’s the truth: I was good. I had a degree in music composition and a MFA in theatre. I could do all the tricks that vocalists learn after a decade-plus of training: I could project, enunciate, pull pitches out of the air, stretch a note out for 30 seconds without breathing, and sing a three-octave chromatic scale. I knew how to tell a joke so that an audience would laugh. I knew how to write a song that was clever and memorable.

What I didn’t realize when I started was that all of that is the baseline.

I failed because I couldn’t level up. I failed because the people whom I considered my peers when I started performing ended up surpassing me in so many ways that I was no longer part of the same conversation.

I failed because I was good, but not great; and now I have a channel full of YouTube videos that I cannot watch because the hope and the work and the dedication that I put into what I legitimately considered my career is so embarrassing, in both its genuineness and its lack of genius.

Someday I’ll delete them all. 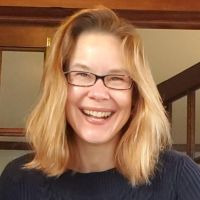 Nicole Dieker is a freelance writer and ghostwriter. She had to stop ballet lessons before she went en pointe, but she has been in A Midsummer Night's Dream twice. Her work has been featured in The Billfold, Yearbook Office, Unbest, and Who Are We Now, and she posts weekly Tumblr essays about earning money as a writer.