She peels back the plastic and gets out of the water, a little clumsy with her limbs not moving right and her blue-black blood slow shot through them. She hasn’t even opened her eyes yet, they’ve been closed that long she has to pry them with thick fingers, prop them open a while, practice her blinks. Her eyes see well, and if there were anyone here, they’d see eyes of a glorious brightness, clear like something raised on fish and chilled glacial water. God, she needs a cigarette. Clothes first.

She climbs out of the TV into an unoccupied room with a battered tartan sofa covered in pillows, a TV table sprawled with sweet wrappers and old bills. She leaves the room for the hall, for the bathroom and a big old towel for her body and one for her blonde hair. She should probably take a shower and rinse it clean of scum from the lake, but you can have enough contact with water, you know? In the little bedroom she finds a drawer full of plaid shirts and another with sweats. She gets into the clothes and, if she can’t really feel warm, being dead, she at least feels something new, more going on than ‘body’, ‘dead’, ‘girl’.

The dead girl makes herself a coffee in the wood-panelled kitchenette and stirs four teaspoons of sugar in, plus cream, and it’s the best thing she’s ever tasted and she licks the lid of the cream pot before putting it back on. There’s a packet of cigarettes on the table under a cable bill, but it’s not a brand she likes and there’s no lighter. Well, whatever. She lights it on the stove and comes back to the sofa with her coffee and her smoke.

What’s on the TV? Two detectives in a car, two men, eloquently snarling at each other. Countryside rolls past, low and humid and green, like a summer dying from oversaturation, or it’s a City-side bleak in February. Her death is always about things other than her death. The girl puffs on her cigarette, slurps her coffee. Not long now. She mashes the butt on the table. There’s the sugarcane field. There’s the alley. She gets out of her clothes. Always naked. She flicks her hair back from her eyes. Takes a drag and holds her breath, which she can hold forever. Back into the TV. Here’s nothing but a wide desolate space, green or stony. She picks her way shoeless across the ground, arms bound at her back. Against her throat a delicate bruise. He’s killed her already, so at least there’s that.  And there’s the spot where she’s been left, right up against that tree. Right behind that wall. There’s the spot where she’ll be found.

Car engine in the distance. Those men, talking already. They don’t ever shut up.  She lies down and faces the sky, letting out one last long mouthful of smoke. 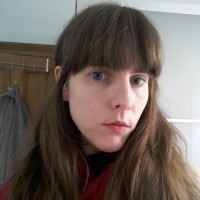 Helen McClory is a writer from Scotland. All her flash and longer fiction is this strange and concerned with the inner lives of girls, dead or otherwise.