My Trans Story is Not Your Growth Experience

The Toast’s previous coverage of trans* issues can be found here. This post brought to you by figwiggin.

Last year, my girlfriend and I spent our first Christmas vacation together in my hometown of Dallas, TX. We’d been together for only a few months at the time, but she was excited to see the town I grew up in, so we boarded a flight after finals and landed a miserable 10 hours later. At the border an agent accosted me over discrepancies between my passport and my appearance.

This began happening more regularly after I started taking hormones in 2010, and for obvious reasons. Why a terrorist would be dumb enough to get a fake passport with an opposite gender marker, an opposite gender picture, and an opposite gender name is beyond me, but apparently the USA is absolutely terrified of such an eventuality. As the Hank Shrader-looking fellow glazed dumbly over the 5 pieces of ID I placed before him, I wore the same expression I always wear in these situations. I cock my head slightly, narrow my eyes, and swallow my lips as if someone is presenting a desiccated cat to me and I’m pretending to be nonchalant about it.

Several days later, my partner and I went to Barnes & Noble and I spied a book out of the corner of my eye bearing a name like My Husband Wears My Clothes or From John to Jane or something like that. Ever since I became aware of my trans-sexual identity I’ve become very attuned to this sort of thing. I suppose it’s like gay-dar, but much less sexy. I have a knack for immediately noticing any piece of media that even suggests trans-sexuality, as if I had heat-vision goggles on.

I cracked open the book, and immediately shut it. Of course. This was a memoir of another cis-woman who finds she isn’t as enlightened as she thinks she is when she finds her “husband” raiding her panty drawer and is subsequently transformed into a better person through the grace and patience of her partner.

As a member of a minority whose voice is very rarely heard, much less listened to, seeing such a piece of media unfailingly irritates me. It makes me feel like Richard Pryor in The Toy. My presence in another person’s life leads them to grow as a character, to undergo an arc. Character arcs are what define protagonists in stories. If a character goes through some trials and challenges and ultimately comes out of the story a different person, for better or worse, then they are a more fully realized character. As a trans person in this narrative I am relegated to a plot device. An obstacle. Something that must be overcome in order for the real protagonist, the cis-woman, to complete her arc.

Obviously the stories of partners, parents, and friends of trans people are valuable. The existence of this book and the multitude of books like it (see: Sex Changes, Almost Perfect, Trans-sister Radio) as well as films like Normal, provide comforting narratives for these people who are struggling with deep emotional questions about their own identities, attitudes, and beliefs when confronted with a profound change in someone close to them.  Transition is hard for all parties involved, and all emotional struggles are important. As a feminist it would be unbecoming of me to suggest that some perspectives are not valuable.

That said; I am completely sick of it.

Trans-sexuals are one of the most marginalized groups in North American society today: 1/5 of us are homeless for a portion of our lives; 57% of us are rejected outright by our families; 30% of us have a physical disability or mental condition; we have double the rate of unemployment of the general population, and half report being harassed on the job; we have four times the national average of HIV infections; 41% of us have attempted suicide; and these numbers get even worse when whites are separated out from the rest of the sample, leaving only racial and ethnic minorities.

One very effective method of countering all of these effects is the introduction of an accepting network of family, friends, and partners. In this way cis-centric narratives about trans people are very valuable to the trans community. My partner, who is a cis-woman, owes a small portion of her awareness of trans identities to a book she read at 14 called Luna, a young adult novel about a cis-girl and her transgender sister. I probably owe my sanity to my girlfriend. I love her, and if this book played a small part in expanding her mind, then surely it deserves to exist.

Please understand: it is not the cis-centric narratives themselves that I take issue with, but rather the prioritization of these narratives over stories of the actual marginalized population here, which in the case of trans-sexuals, in particular trans-women, means a population that generally lacks positive role models and protagonists of our own. We need role models in order to understand ourselves, and to have positive self-conceptions, especially considering we live in a society that largely despises us. It is not difficult to extrapolate that such a hateful cultural landscape would instill in us a profound self-loathing, a feeling of being freakish and different.

Yet, the most privileged narrative about trans people is not our story, but rather the story of how the cissies learn from us to not be complete asswipes, and are subsequently showered with praise and hole punches on their liberalism card.

Stories from the perspective of the “normals” which look in, almost voyeuristically, on the lives of the non-normals, are baby’s first empathy. It is far easier for the privileged to view the oppressed through the eyes of someone they can identify with, and that identification comes from a shared privilege. It’s a stepping-stone to truly feeling empathy for those who are different, even radically different, from you. However, it feels like many simply stop there.

On this level it makes perfect sense to me that stories like mine aren’t the ones getting the spotlight. Trans-gender people by their very nature fly in the face of thousands of years of shared cultural expectations of the immutability of gender, gender expression, and sex itself. Some see us as traitors, as traps, or as generally incomprehensible altogether. Even some feminists and gay activists shy away from us, or even go so far as to outright detest us. We complicate matters of gender and sex, changing them from static constructions to mutable shades of grey, just as the gays do, only more so. In order to understand us it makes sense to me that people would use a metaphorical telescope to view us instead of getting up close and personal. Cis-centric narratives are that telescope. They keep us at arms length and view us through a lens that is at once reductionist and familiar.

This is a necessary stepping-stone toward building empathy, but it is just that. A step. It is very worrying to me that this step is given so much more prominence than the actual lived experiences of minorities simply because it is easier and more palatable to the privileged.

At the time of this writing I haven’t traveled back home yet for Christmas 2013. My partner will be coming with me again, and for the first time since I embarked on this journey I will finally have a passport that reflects my true self. I received sex reassignment surgery in May, which made me woman enough for the Canadian government to stamp a tiny F next to my new name (yes, our stories continue on after the big surgery in the 3rd act.)

My girlfriend has never once said anything remotely transphobic to me, has never asked any prodding questions without my consent, and was fully supportive of me getting my surgery without ever suggesting that I don’t know what I need or how to run my own life. She doesn’t just owe this to some book, but to her own intelligence and introspective abilities, as well as her willingness to listen and learn. It is really not that hard to treat us like human beings. She is proof of that. 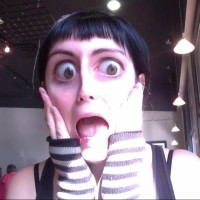 Quinn is a deeply opinionated Canadian ex-pat and trans-sexual. She loves nothing more than comics, vivisections, and you. Yes. You.