More Than You Ever Dreamed Of Knowing About Having a Mammoplasty

I loved jump rope games: Lizzie Borden, Ice Cream Sundae, Cinderella (and what part of her fellow was she kissing that she made a mistake and kissed a snake instead?) My sister and I skipped all afternoon, chanting and challenging each other, until I was in fifth grade. That’s when someone in my class first called me “Melons.” The other kids thought it was hilarious, and can I blame them? My name’s Melanie and I had boobs.

My friends had plenty to say about my plenty, too. A cheerleader advised, “If you’ve got it, flaunt it,” while we changed for 7th grade gym. My first boyfriend’s braces gleamed when he repeated, “I just want to get up there.” My 32A BFF spent much of senior year poking fun at my 34DDs, assuring me that “anything more than a handful is too much.”

I wore dresses with waistlines veering toward my sternum, button-downs with gaping plackets, bras I overflowed, XL t-shirts to cover my otherwise M frame. The t-shirts topped my (strictly one-piece) bathing suits from middle school on. I said, “I burn too easily,” when what I meant was, “Those adult men actively ogling my chest make me squeamish.”

Sometime after Mom’s second breast reduction (the first one didn’t take), she sat me down to talk about the dangers of men; not your stereotypical ‘boys only want one thing’ chat but specific, scary stories about her large-bosomed teenage years. Then her mother sat me down. Grandma’s tale was less specific, but certainly no less scary.

In college, I discovered oversized blazers. I discovered that more than a handful didn’t have to be too much. I discovered that I could use being ogled to get my way, which meant every time I used that power, or even thought the power might be in play, I had to navigate my antipathy about it.

College: Blazer 100% effective at ensuring no one knows my cup size (except future spouse, also blazered, but for different reasons.)

By the time I weaned my kids, my bra size was 36G, which is a lot of literal baggage to carry around along with all of the psychic baggage that comes with big boobs. I’d spent thirty months using my breasts as God intended, if we presume that God wasn’t in the least interested in multi-functional body parts. (Or if we presume that God also wanted me to use them to attract a mate, that box had also been checked. Good job, boobs!)

Adulthood: Baby apologizes for making my boobs grow even larger by acting as a shield between my chest and the world.

I’d spent over twenty years hunching my shoulders as if I was a master artist capable of using angles and perspective to divert attention from my chest. My back hurt. Every day, all day. I paid upwards of $50 per bra at specialty stores. There were heat rashes and stretch marks and if I so much as walked fast, I bounced. You less-endowed people might think that bouncing is just unwieldy or discomfiting, but let me tell you: it hurts. It hurts a lot. It hurts your back and shoulders and chest wall. And finding a sports bra with both coverage and anything like support requires long hours online, cross-referencing and bookmarking and making obscure notes. Even then, you’re likely to end up squeezed so tight you can’t remove it once you’re sweaty, and bouncing anyway.

So I talked to people. Three friends who’d had reductions as young women (two very pro, one mixed review). My mom, whose third mammoplasty worked (pro). My husband (he’d support me so my bra wouldn’t have to). My insurance company, which eventually disclosed their criteria for medically necessary breast reductions. My GP, who documented my back pain and gave me a referral. A plastic surgeon, who measured the length from my neck to my nipples, checked out the permanent bra-strap grooves in my shoulders, and took pictures as I stood topless against his wall.

(This was not how I’d ever envisioned someone taking topless pictures of me.)

And then the wars began. A truism: insurance companies will work their asses off to avoid paying for surgeries.  Deny, deny, deny. The surgeon’s assistant became my new best friend, as she and I donned chainmail and armed ourselves with billing codes, mammogram films, letters from my chiropractor, and her supernatural ability to stay on hold for hours waiting to talk to a supervisor. I trained myself to ignore that every claims person I spoke to was looking at a file containing my topless pictures.

(This was not how I’d ever envisioned my giant naked breasts being given a national stage.)

A mere eight months later, I had a date for my mammoplasty. Back to the surgeon I went, with a box of chocolates for his assistant. He drew all over my breasts with magic marker, and (this is a common thread in every breast reduction story I’ve heard) told me that a B cup would be too small for me to retain good nerve endings, so he’d aim for a C. We went over the usual pre-surgical things (meds, wound care, my worry that I’d lose all nipple sensation) and he wisely sent me home with a Valium.

Before I took it, I hugged my sons. A lot. The littler one was six, and still amenable to being picked up often for snuggles. Post-op I wasn’t going to be lifting a milk carton, much less my son. My husband said goodbye to the breasts he’d always known. I popped a pill and decided not to look back.

The operation itself was fine. Half an hour in the waiting room, four hours on the table, and next thing I knew I was a groggily gal in post-op. Despite the bandages, my breasts were noticeably smaller. When the boys visited, the first thing the younger one said was, “Mommy, you look skinnier!”

It took a couple of weeks of seeping pus and scar cream and random itching as the nerve endings reknit, and a couple more weeks for all the swelling and bruising to go away, but after that I did the most amazing thing. I walked into Target and bought a bra off the rack. It was even pretty! And it was a C cup.

That was ambitious of me. I was more of a D, but I had a point to make. Besides, my new breasts were so darn perky a bra hardly mattered. Except for the nipples.

Do you know how they cut for a keyhole-style mammoplasty? Do you want to know? (Probably you don’t, and you should close your eyes for the rest of this paragraph.) The basic cut is an inverted T; if the breast were a (saggy) globe, the cut would go from equator to equator via Antarctica. They put a metal disc like a washer over the nipple and cut around it, preserving milk ducts and nerve endings to the areola, but reducing the areola’s circumference, to be proportionate to the new breast size. After removing tissue from the breast and stitching you back up, they cut a nice washer-sized hole in the new center of the breast and pop the nipple and what’s left of the areola out of the hole before sewing it in place. Like ice fishing, but with mammary glands.

So before I left the hospital, the surgeon poked me in the nipple, and I yelped and he said, “Oh good, you have strong sensation there.” And then he did it to the other nipple. (I asked; friends with female surgeons underwent the same treatment.) The sensation was more than strong; my nipples hurt constantly that first month. They’ve since settled down, but they’ve never been ‘normal’ again. Eight years post-surgery and they’re the perkiest damn nipples you’ve ever seen outside of a topless hockey rink. Even the padded t-shirt bras don’t always keep them subtle, and trust me, I like you just fine, but I’m really not that happy to see you. The nerve endings are all kinds of screwy, so it’s a fine line between arousal and pain (not the good kind of pain), especially if the air’s the least bit cool. And forget actually being cold. I’ve figured out how to live with my new breasts when it comes to arousal and bra padding and the enduring numbness along those equatorial cuts, but winter weather destroys me. Fortunately I live in a mild area, so I don’t have to spend several months a year taking care never to be without layers for even a minute. One minute of cold nipples equals one hour of palming my chest, no matter how publically, to warm up so I’m no longer in pain.

There’s this one hair that used to grow at the top edge of my left areola. It emerges an inch south of the bottom edge now, smack dab in the middle of the scar, until I remember to pluck it out. Otherwise the scars aren’t much of a bother. They’re faint lines. I no longer look Frankenstein-monster-ish, except for the lumpy spots under my armpits where the disparate layers of skin were pulled together. And no one but my husband and me see the scars, and he’s seemingly unfazed by them. I’m the one who keeps messing with them, disconcerted that you could stick a pin in the scars and I’d not feel a thing. (Please don’t poke my scars with a pin.)

These days I buy clothes off the rack without worrying how they’ll stretch across my rack. My cardio routine never involves clutching my boobs firmly to keep them still, though I’m not as good at jump rope as I used to be. My chiropractor misses me. I can sleep on my stomach.

If I feel like flaunting it, I can. And if I don’t, I don’t need rounded shoulders and oversized blazers to serve as inefficient camouflage; I can just button up. I never can find safety pins anymore, now that I don’t have to keep piles of them around in case of gaps in my shirt.

Probably some of those men would have ogled me anyway, if I’d been a less-endowed teen. Young women everywhere are objectified and victimized; I just got to be one who was told outright that her breasts were gorgeous and that if I wasn’t a third his age he’d love to get a crack at them. A smaller chest doesn’t make a boyfriend any less likely to want to remove his girlfriend’s bra, or school peers less likely to taunt each other. We all have baggage, and growing up big-chested is part of mine.

Now that my baggage is less external, now that there has been an actual weight (about six pounds) taken off my shoulders, I’m shedding my internal baggage. It’s revelatory, having breasts that are just two more parts of Melanie, instead of the main things everyone sees about Melanie.

Medical benefits aside, the mammoplasty has allowed me to reshape my relationship to my body. To not see it as an unwanted and inaccurate calling card. To enjoy it some, to mistreat it some, to clad it in frilly bras or sports bras or no bras at all, but to do all of it for myself. 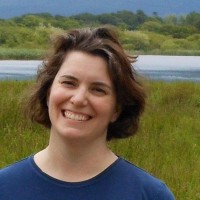 Melanie Greene writes about books at dakimel.blogspot.com. You can follow her @dakimel.