Lessons I’ve Learned From Being a Therapist

I was a practicing couples and family therapist for six years, working with families of kids in facilities, people with schizophrenia, children, and single moms. I could tell you about all the things I’ve learned about love and lust and dating from this six years, but those relationships are analyzed to death. Instead, here are some of the things I’ve learned about every other kind of relationship- families, friends, strangers. The relationships that are often ignored and thought to be “second nature” are the ones that end up being the toughest to navigate at times.

1. Being able to say “I’m sorry” is a skill, and one that not a lot of people possess. Hone that skill. Apologizing shouldn’t be followed by “but here’s why I did it” or “and then you did this”. An apology is you taking responsibility for hurting someone else, not a notch on a scorecard in some bizarro battle of “Who’s Right?”

2.  People behave in very intense ways when their feelings are hurt. I’ve seen teenagers start punching things when their parents don’t show up for visits. I’ve seen parents hysterically cry and call themselves failures when they are told their child is setting fires. I once had a woman tell me that my dye job was hideous when I confronted her about her drug use. We are all human and we don’t like feeling embarrassed or hurt, and it’s best to keep that in mind when dealing with others. That doesn’t mean you excuse their behavior, but it’s always helpful to remember that sometimes the ego has an ugly way of protecting itself.

3. Childhoods don’t last forever, they just feel like they do. Don’t be in such a hurry to speed up a childhood that you will be pining for a few years down the line. This is why people in their 30s are so obsessed with nostalgia. Dating and drama will be there for you whenever- you do not have to chase them.

4. The only thing that is permanent is change. You cannot stop change from happening, you can only decide how you react to it, and whether or not you grow from it.

5. If a friend is making you feel small, end the friendship. It doesn’t matter if you’ve been friends for years, or if you don’t have that many friends, or if you have to see them all the time. Nothing is more damaging to your sense of self worth than surrounding yourself with people who pick away at you. Feeling lonely is better than feeling small.

6. So let’s talk about friend breakups. They are intensely painful and traumatic, and while we have a pretty standard script for romantic breakups- “It’s not you, it’s me”- we still, as a people, have no good way to break up with a friend. Years ago, I had a female friend that I glommed onto right after a breakup. Sure, I was pouring all of my relationship energy into this girl to avoid dealing with a breakup, but therapists are human too. We spent all of our time together, which I was grateful for at first, until she started getting angry with me for spending time with other people. I also noticed that she would put me down in front of other people, but at that time I felt pretty low so it matched up with my opinion of myself. After a few weeks I started feeling especially stressed and anxious around her, and I finally realized that this relationship was toxic for me. I sat her down and did my best to focus on my experience of the friendship, and not on the wrongs I felt like she had committed. I told her I cared about her and didn’t want to resent her, so I was going to have to back off a bit. It was excruciatingly awkward, and for the next few weeks, I felt incredibly lonely, but I also felt less anxious.

A note: I don’t disapprove of fadeaways with friends you no longer want to hang out with, just because the awkwardness and pain is so intense.

7. Don’t take responsibility for other people’s choices, and don’t let people bully you into taking responsibility for their choices. We are all captains of our own ships and have enough to worry about keeping ourselves afloat- the minute you take on, as your duty, someone else’s joy/career/well being, you have entered into a codependent, unhealthy alliance with them. I have worked with many parents who are trying so force to make their children to be more “normal.” I have worked with many jilted lovers who are desperate to win their exes back. In both cases, by trying to convince yourself that you can somehow control the other person’s choices, you are only setting yourself up for frustration and disappointment. One of the scariest things in life is realizing how little control you have in this world. All you can really control, ever, are your own actions. That’s it.

8. At some point, your parents go from being your leaders and trusted mentors (I’m speaking VERY generally here) to being advisors and loving but occasionally annoying adults in your life. I once worked with a completely miserable couple who came to me with problems in their marriage, but it turned out the problems in their marriage stemmed from the fact that the husband was still continually seeking permission from his parents for things ranging from what couch to buy to when to have children. Both the parents and the (adult) kid weren’t sure how to evolve their relationship, but once they did, the marital problems settled down.

9. It is tough to be considered an adult by your parents when you are still financially dependent on them. Not impossible, but tough. You can be emotionally dependent on them forever if you like, but not relying on them for finances gives you a level of freedom (albeit destitute freedom) that is unrivaled. Being financially independent makes you able to fake smile and nod at them when they make ridiculous suggestions.

10. Always always strive for more self-awareness. If you are feeling an intense emotion, do some self exploration before you decide to act on that emotion. Sit with yourself, and when you do act, act with intentionality. Sometimes that intention may be “to make you feel like shit”, but at least be aware of your intentions. Tapping into your awareness of your own behavior is my number one tip for improving your life.

11. I am especially sensitive to, and annoyed by, people who pride themselves on “just telling it like it is”. Sometimes these people possess a rare gift of insight and kindness, but more often, they’re being cruel and disguising it as some sort of lame superpower. Giving someone the hard truth doesn’t make you more insightful, it makes you the asshole who saw the same thing everyone else saw and decided it might make you feel better to say it out loud.

12. Regardless of what you choose to do with them, your blood relatives will always be your blood relatives. As you grow older your boundaries with those people may change a great deal, but it’s important to remember that you don’t get to decide how other people show love. You can only choose to accept their love or not.

13. Notice I didn’t use the term “family” above? That’s because one of the greatest lessons of life is that you get to create your own family as you get older. This family, for a lot of us, will include blood relatives. For some of us, it will not. The best family members are people who have seen every side of you, who accept you for who you are, and who are always pushing you to be the best version of yourself.

15. Literally everyone is struggling with some sort of demon. Yes, you are absolutely unique and your demons are unique to you, but we’ve all felt helpless/angry/miserable/empty/vengeful. Take comfort in the fact that other people have felt how you are feeling, and they’ve survived it. 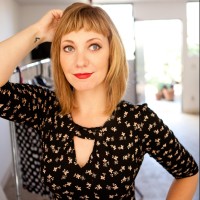