Dating While Trans: The Doldrums

Let me start this off by saying that I am a woman and that is how I identify 95% of the time. Female is how I present myself to the world and it is usually nobody’s business what kind of business I have in my panties. Even my driver’s license says “female” and those things don’t lie about anything except my weight. Unfortunately, I feel the need to attach an asterisk to the “woman” label from time to time as the situation demands. In the gender binary dating system, my choices get boiled down to a radio button that claims either “male” or “female.” That works fine for government documents but doesn’t tell the whole story when it comes to my body. Don’t get me wrong, I really don’t enjoy feeling like a peripheral, marginalized part of society on the outskirts of society, and I’m definitely conflicted when it comes to la revelación. Even if given the choice to put something other than those two, I’d probably stick with “female” because I would want to avoid judgment.

For you folks at home, I am a thirty-two year old transwoman living in Nashville, TN and I’m currently saving up to afford vaginoplasty so that I can finally look good in yoga pants. I won’t lie, I can totally rock a bikini if need be, but vigorous moving around can Release the Kraken so to speak, and then you’re stuck with an awkward lump in your knickers where should only hang a fine set of vaginal drapery. Unlike many women, I’ve never bled from a birthing canal in an attempt to cyclically shed endometrial lining, but I hold many other life experiences in common with my cis-ters. Earning less in comparison to male counterparts with equal career experience? Check. Being talked down to by men who think that their penis is some kind of Arthurian legendary sword that bestows kingly authority? Check. PMS, though there’s never an “M” and the fluctuation only occurs when my dosage gets screwed up? Boy howdy, check! The point being that estrogen flows quite heavily through my veins, testosterone is suppressed as much as possible, my boobs catch the attention of men, and I willingly watch ABC Family Christmas movies and cry at all of the poignant, hokey moments. While that does not sum up every woman’s experience, it falls well within the realm of “this person is probably a female” as opposed to “high five, bro, you’re a dude” experiences.

With that awkward introduction/explanation out of the way, I would like to talk about my experience with dating as a woman → subcategory: transwoman. I started transitioning from male to female in January of 2011, a couple of months after I turned 29. Separation from my wife led to the revelation that I needed to stop living my life in order to make others happy (while constantly struggling inwardly) and start taking steps towards finding happiness, meaning, and fulfillment in my own life. That first year was one filled with tremendous tumult and it wasn’t until my 9th or 10th month that I decided I looked okay-ish enough to try dating as a transwoman. I actually started seeking a partner by signing up for a sketchy transgender woman dating site. I could tell that it was sketchy by the site’s background being set to black and the ads for porn everywhere. It was definitely the kind of place you were afraid to close your eyes and randomly click about (unlike, say, the Google homepage). The premise was simple enough: transwomen on one side, men on the other, and a virtual 8th grade dance hall in the middle filled with size 11 shoes and stubbornly hairy upper lips. For the most part, everyone was respectful to each other and there were lots of foreign marriage proposals coming my way. Personally, I wanted a man that was local and didn’t require me to learn Czech or Russian. I gave the site about two or three weeks before I decided to move on to my first, middle, and last dating site love: OKCupid.

I prefer OKCupid for a lot of reasons. It is easily accessible by everyone, you can screen people by their match percentage based on answering questions about your preference for bacon and atheism, and, most importantly, it’s free. I mean, I guess I could have used a paid-service dating site, but I was still a bit leery of my chance to actually find love. Yes, that first year came with a lot of self-loathing about my body (yay initiation to womanhood.) When I first made a profile on the site, I outed myself as transgender in the very first line of the profile. I had spent so long being dishonest with myself that I needed to just be overtly honest in everything I did – a practice which I still tend towards way too often. At the time, I was only looking for men and it wasn’t until about six months later that I altered my profile to read “bisexual,” and then eventually “gay” because free OKCupid dating profiles attract all the men and that’s not often a good thing. If you’ve ever had a vagina or looked like you had a vagina, then you know that in real life there is a subset of obnoxious men who just want to hip-thrust their pants towards the general direction of your ladying. This same group of men seems to congregate on OKCupid. I suspect that one day, evolution will find a predator willing to thin the herd of these alpha douches, but I doubt such an evolutionary leap will happen in my lifetime. I’d like to throw in a disclaimer here that I am by no means a man-hating She-Ra. I’m specifically against the irritating assholes who drive women towards lesbian relationships with their intense awfulness. Adding to their oh-so-fragrant, vinegar-based douchiness is a desire to assert their heterosexuality because gaying is the worst thing ever. So, if you’re a transwoman who just happens to be looking for an honest, normal relationship, then you first get ridiculed – “haha, you’re a tranny and I’m not gay, you queerbag” – and then you get inappropriately propositioned. Pornstache put it best in OITNB season 1, episode 3 when he said, “Besides, she used to have a dick, so she knows what it likes.“ I feel like this aptly sums up what men who are like George Mendez assume when it comes to transwomen.

I’m really not sure what exactly determines the order of attraction in the minds of lascivious dudes. Is it, “Oh my god! Tits! Ass! Face! This is a woman and I must find some way to get my penis involved!”? I’m also completely baffled by how some male specimens can be so incredibly rude to a stranger with no remorse for their actions. Anyway, I was sometimes floored by the messages I received as a result of the reactions to my transgenderness. One of my favorites was from a man with whom I shared a 72% match (not too shabby!) The entirety of the message went like this: “Your not a woman so why are you in my matches. I am seeking a female with vagina but will settle with your ‘asshole’ if you want?” Obviously, I was immediately charmed by his eloquent prose, but I decided to ignore his manly, pheromone-drenched, online mating call. I did want to ask him why “asshole” was quoted. Was he using it as a metaphor for the common man’s struggle against government regulation and oversight? I felt that answers to such questions would likely overload my tiny, delicate female-sans-vagina brain. Not long after that, I changed the placement of where I revealed my transwoman status on my profile to the end. This way, men were forced to read through ALL of my amazingness to get to the (*spoiler alert*) Crying Game surprise ending. Truly, there is nothing worse than finding out that the person you love, like, or sorta tolerate is by all intents and purposes (except childbearing ones) a woman: tits, farts, and all. After that, the delightfully rude messages were usually replaced by the occasional brusque brush-offs. This isn’t to say that I got no genuine messages from some truly darling men. I did. Some of the conversations were polite and brief, realizing that we didn’t have enough in common, or went on for a bit and resulted in rather lackluster dates. That was normal and it was a good, close second to what I was seeking all along.

I eventually removed “transgender” from my profile altogether. By this time (maybe nine months to a year after I started looking), I pretty much stopped responding to any and all men in preference for the better sex. When I start a conversation with someone new, it is usually within the first five or so message replies that I find a way to work in that I’m a woman with an asterisk. It is still really important to me to be honest to those with whom I’m trying to create a connection. In the social experiment I call my life, I have observed just how readily people can make snap judgments. Most who were bothered by it probably just looked at my profile and said to themselves, “that’s not for me,” and that is 100% just fine. The assholes who judged my book, Remembrance of Trans Past, by its cover and decided to act out ruined it for the genuine guys who probably would have been half-decent lovers (if trained well, of course.) 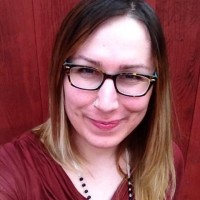 Audrey Arndt is a transwoman, an independent web developer, and an LGBTQI and Deaf rights advocate in her 30s living in Nashville, TN. She has two cats, she crochets things, she wants a Cthulhu tramp stamp, and she occasionally makes with the funny.