I Read Bigfoot Erotica For Research

Leonard refused to let me go. He stroked my back, his breath in my ear. He began purring, which was bizarre. The sound rumbled in his chest, making him vibrate. He’s never done that before. It reminded me a bit of a cat, the sound soothing, as well as intimate and appealing. I felt myself softening towards him, melting into the warmth and comfort of his matted fur. He carried me to an animal pelt that had been placed over a pile of straw. The atmosphere in the barn suddenly shifted…my fear had morphed into something different, and my sole focus was on my Bigfoot.

Writing Bigfoot porn, a sub-genre of “cryptozoological erotica” has earned self-published author Virginia Wade over thirty grand a month. That’s a lot of people buying books about having sex with a Sasquatch, and if a lot of people are buying, it must have appeal. If it has appeal, I must understand why. I suffer from rabid curiosity of things that seem at first strange and deviant, which has lead me to watch both Human Centipede movies and view more celebrity sex tapes than most (I still refuse to watch Dustin Diamond’s. I have limits.) I don’t judge those buying; what better way to explore sexual proclivities than through the written word? Also, my analytical brain needed to know the logistics of how one comes to have sex with a Sasquatch.

If we were casually having drinks in a bar and I let it drop that I had just “read Bigfoot porn,” your second question after what did you say? would likely be: did you enjoy it? I’d answer: It depends how you define “enjoy.” I wasn’t writhing in my seat, overcome with arousal (I read most of it on the the train, doing the awkward hunch one does when reading smut on your Kindle in public.) I had questions and needed answers. What are the logistics of such trysts? How does she justify the existence of Bigfoot? I will give Virginia Wade credit, she knows people will be craving such explanations, and she does provide plenty of, shall we say, logistics.

The heroine of our journey is Porsche, a hot, busty just-legal blonde (NO, THAT CANNOT BE HER NAME? – Ed.). We meet her on a camping trip with her friends which is chaperoned by friends’ father. We get no further than page three for Porsche sneaking into the dad’s tent for some forbidden doggy-style action. There’s plenty of moaning, thrusting, exploding, filling, and all the tropes you would expect from a mass market erotica, or say, a letter to Penthouse. At least we get right to the sex. Some of us (me) don’t care about the stolen glances or meet-cute, we just want some stone-cold banging right in Chapter One.

Here’s where the parameters of consent get blurry: Porsche “gives in” and can’t believe how GOOD it feels. As in Sasquatches are straight up sex EXPERTS. It seems they have evolved to be master lovemakers; their phalluses are made of a sponge-like flesh, so they can fit in almost any space (convenient!), and their tongues are long and pliable, perfect for cunnilingus (of course!) Even if they have to force them at first, they have evolved to guarantee a woman will be sexually satisfied. Which, by this logic, the rape and capture is necessary (for the beasts) because the women will enjoy themselves once they give in. I suppose a girl doesn’t just meet a Bigfoot at the local grocery store, the creature has to overcome her somehow. Although I didn’t expect rape on the menu.

The Sasquatch rape almost made me put the book down. Almost. I was still too curious to see where is was leading and to understand how others could find it titillating. Written erotica is a safe way to fulfill that fantasy, so if someone does have a rape fantasy, written erotica is the way to go. I’d like to think that is a whole race of creatures who are biologically evolved to  to please women is, I suppose, intriguing. It appeals to the notion that men don’t understand women’s sexuality, and never will. Cue a million “can’t find the clitoris” jokes from bad stand-up open mics. Sure, the book could describe how the Bigfoot’s tongue was able to please every nook and cranny in Porsche’s woman cave, but I couldn’t get the past that this was an ape man and he could barely say two words, much less carry on an intelligent conversation about post-punk indie bands at the turn of the 21st century (now you know what my erotic fantasies are) or any other human conversation. Leonard has the vocabulary of say, Animal of The Muppets. (“Me like fucking Porsche!”;  “Nice ass, Porsche!”)

Once Leonard has given multiple lathings and thrustings to Porsche and friends, he takes them to rejoin his tribe, a nomadic group with a social hierarchy and like him, have small grasp on the English language. Porsche’s sense of vanity seems to overcome her horror of being raped and kidnapped. She basks in being worshipped by this tribe of Sasquatches. So much so, in fact, that she is always game their tradition of nightly orgies. She converses with her lover Leonard in stunted telegram speech, but she’s just too vain to not to let being the object of desire cause her fall in love. Which she does, with Leonard. Because Sasquatch cock is just that good.

I say Stockholm syndrome, but Virginia posits that Porsche likes how Leonard protects her, takes care of her basic needs and gets possessive of her. What Porsche provides Leonard is the sasquatches is sexual access to a hot human bod and the possibility of Sasquatch babies. Yes, this just screams IFFY with a flashing neon sign, but the character of Porsche personally finds this ideal, and as a reader, I am trying my best to go on this literary journey with her. Porsche really gets off on gaining unconditional love and lust from the tribe, and that in itself is certainly a legitimate sexual fantasy.

But there’s still the issue of the Sasquatches not being human. Well, technically they are all half-human, but they are not of the same species. There are many mentions of their tattered hairy bodies and often smell of wet dog. They are not of our species. However, they indicate their arousal and desire for sex, so it’s not as if this is an innocent, non-consensual being. I’ll  set aside the fact they are animals (can we really?) and really focus on the “special” part. They are beings that Porsche has discovered, a secret only she and other women in the tribe (past kidnap victims) share. There’s the specialness of it, it’s a sexual experience that no one else has and no one else will. Conceptually, that is erotic. Imagine you traveled to a secret village of hot, lusty guys and gals that only you knew about and they worshipped your body? I’d book a one-way ticket.

As literature, this ain’t no Joyce Carol Oates. It’s probably not even V.C. Andrews. The trite dialogue and simplistic writing may also be an homage to mass market “romance,” but I am quite certain that there’s no satirical intent. Porsche, our heroine and narrator, is flat-out boring. I suppose this is so she can serve as vessel that we can project our fantasies on, and her character is defined by how much the others desire her and protect her. Although, in a rare moment of unique thought, she mentions that she is glad to roam the mountains endlessly with no place to camp because it will help her lose her baby weight. Is she right or is she right, ladies?

Ultimately, six volumes later, despite being bored with the Sasquatch sex, I can confidently say that I actually do get the appeal of these books and this genre. Let’s think of it this way: you are brought into your own special world that only you know about where you are the object of everyone’s desire and you control those beings with your sexual power. These beings want nothing more than to please you sexually. In fact they HAVE to in order for their species to survive. There’s also a fearful element, which for some, is tantalizing. The sasquatches are also polyamorous, giving a woman more sexual freedom than in the traditional world; she is not shamed for her promiscuity, she is rewarded for it. Sure, she’ll have to have their babies whether she wants to or not, but there are tons of people taking care of it, making motherhood a community responsibility.

The protagonists in erotica often serve as a proxy for the reader. These (usually) women are chosen, sought out by these foreign creatures, whether it be aliens, Bigfoots or Frankenstein, They are chosen for a reason- their beauty, sexuality, or their special “otherness.” And isn’t feeling special, feeling wanted, really at the heart of it  all? Isn’t that the ultimate fantasy?

Rest assured I will read the next few volumes when they are released. Above all, I am a completionist. 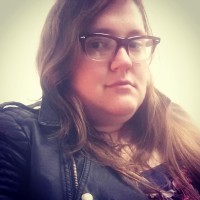 Robin Hardwick is a writer living in Oakland, CA. She is the author of If You Lived Here, You'd Be Perfect By Now: The Unofficial Guide to Sweet Valley High.