Anne Boleyn: Your Hero and Mine

Anne Thériault’s previous work for The Toast can be found here.

If you’re anything like me (and if you aren’t, MAYBE YOU SHOULD BE – THINK ABOUT IT), you’ve definitely spent a lot of your time objectively ranking Henry VIII’s wives. This can be done by carefully employing the scientific method that you learned for the science fair in sixth grade. After that you need to square your answer and find the hypotenuse and then employ the quadratic formula. Because this isn’t just conjecture, ok? This is English Monarchy Science.

The ranking of Henry VII’s wives is so obvious that I shouldn’t even have to tell you who comes first and who comes last. Like, do you even Tudor, bro? But just in case you’re in any danger of coming to the wrong conclusions, let me condescendingly lay it out for you here:

FROM BEST TO SUCKIEST:

Far from being the slutty home-wrecker and raging bitch that both historical texts and popular media make her out to be, Anne was actually a super rad lady (although it should be noted that sluttiness is a social construct, and also that sleeping around and being a raging bitch are not mutually exclusive with the concept of radness.) Anne was a smart woman who knew what she wanted (to be queen) and what she didn’t want (to be the king’s mistress/anything other than queen.) She held out for seven years while Henry tried to get her into his bed. SEVEN YEARS. That is so fucking ballsy. Like, it’s both ballsy not to give the King of England what he wants and also ballsy to assume that you can keep him and his roving boner interested in you for seven years.

Speaking of ballsy, let’s talk about the death grudge that Anne held against Cardinal Wolsey. Some background: Anne had a secret betrothal to Henry Percy, son of the Earl of Northumberland, but when Wolsey found out he forced them to break it off. Anne was fucking pissed, mostly because she was pretty sure no one as high ranking as an earl’s son would ever offer to marry her again (hang in there Anne, there are better things coming – but, spoiler alert, also way worse things.) Did Anne choose to forgive Cardinal Wolsey, one of Henry VIII’s closest friends and advisors, once she and the king were finally boning? NO SHE DID NOT. She had way too much self-respect for that. Instead, she convinced Henry that Wolsey was deliberately cock-blocking him by failing to get him an annulment for his marriage to Catherine of Aragon. And if there was one thing that Henry VIII hated, it was cock-blocking.

Wolsey was stripped of all his titles and sent to Yorkshire. The next year he was accused of treason, and on his way back to stand trial London he died.

Anne was great at a lot of things, for example pretending to be French. She helped solidify England’s alliance with France, which she probably accomplished by taking every important French dude aside and being like, “Listen, just tell him that Catherine of Aragon’s a bitch and that you hate Spain and I promise he’ll love you forever. Also, feel free to keep that shit hole Calais.” She spent her spare time skateboarding around and flipping off the pope. Like, she would lean over Henry’s desk with an anti-Catholic pamphlet in her cleavage and be like, “HEY, CHECK OUT THIS HERETICAL WRITING THAT JUST FELL INTO MY MELON BASKET.” And then Henry would be like, “HMMM YOU SAUCY LITTLE MINX, SOUNDS LIKE SOME GOOD READING MATERIAL FOR WHEN I VISIT THE ROYAL SHIT HOUSE*.” Then he would go to stick his hand down her dress and she’d be all, “NO BUT I AM A VIRTUOUS MAIDEN AND ONLY MY HUSBAND SHALL TOUCH ME THERE. I WISH THOU WERT MY HUSBAND BUT SADLY, THOU ART ALREADY WEDDED” and he’d be like, “WHOA LIGHTBULB MOMENT WHAT IF I MADE A NEW CHURCH THAT LET ME DIVORCE CATHERINE???”

Which is pretty much how the Reformation played out.

For her coronation ceremony, Anne totally wore a dude’s crown. She was like, “Fuck your lady crowns, I want that big gold fucker over there.” And everyone else was like, “BUT MISTRESS FAIR, THAT IS ST. EDWARD’S CROWN. IT HAS ONLY EVER HISTORICALLY BEEN USED TO CROWN A KING. ART THOU NOT A QUEEN?” And Anne was like, “Fuck your gender binary of crowns.”

And then she invented gender theory and burned down the patriarchy and was like, “Fuck all of you motherfuckers.”

Things got a little shaky for Anne after her marriage and subsequent inability to produce a baby with a penis (which, having taken grade eleven biology, I know was actually Henry’s fault, but I guess they didn’t really Science much back then.) Three years after her coronation she was accused of sleeping around with pretty much the entire court, including her brother. Which, I mean, Henry. Come on. That’s fucking gross and you have a gross imagination and what are you, sixteen? Writing out his fake accusation probably involved Henry writing out a bunch of fanfic about Anne and all your friends and being like, HMMM WHICH PAIRING DOES THE ROYAL DICK LIKE BEST? And there is nothing wrong with writing fanfic about your wife, but no one else wants to know about your incest fantasies.

Anne was, of course, beheaded. Henry brought in a special fancy swordsman from France to do the job, like, OH MY LITTLE SWEETMEAT, NOTHING BUT THE BEST BEHEADING FOR YOU. But Anne faced death just like she faced everything else, by which I mean she looked death in the face and made a jerk-off motion. She even went around saying that her execution would be easy because she had such a little neck. The Constable of the Tower said that she laughed “heartily” over that joke. HEARTILY, I TELL YOU. Then she went to the window and flipped off Jane Seymour forever.

Anne lived in a time when women were shit on (figuratively and maybe even literally, depending on people’s kinks) for their entire lives. Unlike most of her contemporaries, she refused to be meek and nice and instead went balls-to-the-wall for what she wanted. And anyone who stood in her way would end up a sad old dead cardinal. You might not like what she did, and you might not like her methods, but man have you ever got to respect the fact that she did not give up on her dream.

*Please note that Henry VIII actually had one of his dude friends employed as his “Groom of the Stool,” which meant that they had to wipe his ass whenever he took a shit. Just throwing that out there. 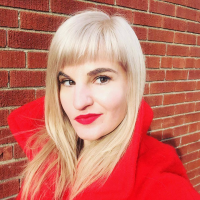 Anne Thériault is a feminist, social agitator and general smarty-pants. She enjoys writing, cussing, and looking at cute pictures of animals on the internet.