The (Un)Dead: A Short Story

Adrienne Celt’s previous work for The Toast can be found here.

Lily, the caretaker’s daughter, was literally run off her feet. Hardly had she pushed one gentleman into the little pantry behind the office and tried to take a bite out of him than the wheezy hall-door bell clanged again. Animal memory made her try to scamper along the bare hallway and let in another guest, but the one she’d bitten thrust her away from himself so hard that she landed on her back and couldn’t figure out how to get up again. Her legs shambled slowly in the open air.

It was always a great affair, the Misses Morkan’s annual dance.

Kate and Julia Morkan came toddling down the dark stairs at once when their nephew Gabriel arrived. He was afraid they might be infected – they moved so slowly – but up closer, their eyes were clear. Both of them kissed Gabriel’s wife, said she must be perished alive. A bad joke, everyone agreed. A light fringe of snow lay like a cape on the shoulders of Gabriel’s overcoat and like toecaps on the toes of his galoshes. Lily, having righted herself, shuffled down the hall, arms outstretched, as if to ask: Is it snowing again, Mr. Conroy?

Yes, Lily, he thought in grim reply. Her fingernails were rimed with blood. I think we’re in for a night of it.

Gabriel took his coat to the pantry, followed closely by Lily and her unearthly moans. Her unearthly hunger.

–Tell me, Lily, he said, attempting to pretend that all was as it should be. Do you still go to school?

She lunged at his throat, and Gabriel coloured as if he made a mistake. He was a stout tallish man, and more than a match for one thin-boned wraith, but still he knew it had been foolish to let himself be cornered with her. He tugged his waistcoat down more tightly over his plump body, and pulled a silver knife from his pocket.

A loud noise came from the front hallway, and Aunt Kate sidled up to Gabriel, who was wiping his knife clean with an embroidered handkerchief. Freddy Malins had arrived, and not much good was expected of him.

Gabriel went to the stairs and listened over the banisters. He recognized Freddy’s laugh, but beneath it rasped a darker humor.

–He’s not so bad, is he? Aunt Kate said to Gabriel.

Gabriel’s brows were furrowed, but he raised them quickly and answered:

At the dinner table they discussed a local monastery, where all the monks had turned at once, which seemed to keep them relatively docile. The monks rarely even bit their guests.

–And do you mean to say, asked Mr. Browne incredulously, that a chap can go down there and sleep in their rooms without some creature of unearthly torment slipping into his chamber to snack on the tender meat of his brains?

–O, most groups lose one or two to bites, said Mary-Jane.

Mr. Browne was further astonished to learn that the monks never moaned, got up at two in the morning, and slept in their coffins.

When no one replied, he pressed.

There was silence at the table.

Gabriel gave his annual Christmas speech. He did not feel himself to be a born leader, but looking out over the wan, terrified faces of the guests filled him with a desire to be rousing.

He said, with confidence in himself:

–Ladies and gentlemen. A new generation is growing up in our midst. A generation actuated by new laws and principles, that fly in the face of our understanding of science, let alone of God.

There were murmurs of assent from all those present who still had faculties enough to understand human speech.

–I fear that this new generation, without empathy or reason and endowed with a hunger for our very flesh and blood, will lack those qualities of humanity, of hospitality, of kindly humor which belonged to an older day.

At this point, though they were moved by Gabriel’s words, everyone jumped up and fled from the dining room, as a wave of zombies pushed through the doorway. Gabriel’s wife Gretta, flushed prettily from her exertions, looked back at Mr. D’Arcy and asked:

–What song is that which you are humming?

–Was I humming? O God, I do that when I’m terrified. It was The Lass of Aughrim, I think, child, but what could that possibly matter?

A spirited wraith leapt out at Mr. D’Arcy’s leg and began tearing it apart, sinews snapping. Gretta sprinted on ahead, smiling slightly to herself in a way that Gabriel didn’t like.

Gabriel himself was bitten while trying to pay the cab driver, on the way back to the hotel. Though he was bleeding quite profusely by the time they made it up to their room, Gabriel didn’t tell Gretta, who stood and gazed quietly out at the street. He wanted, so terribly, one last embrace with her – even to give her a gentle nibble so they might go out into that dreadful mindless unknown together. No, he told himself. Not that.

He was in such a fever of rage and desire that he did not hear her come from the window.

–You are a very generous person, Gabriel, she said. Which was exactly what he always wanted to hear, although not exactly appropriate to the moment. She lay her head against his chest, and it was all he could do to keep himself from biting off the tip of her beloved ear. To distract himself – or perhaps, to distract her – he asked:

–Gretta, dear, what are you thinking about?

–O just this boy I knew once. He’s the one who sang me that song.

Gabriel’s mind was overcome a longing for flesh, for blood, which he’d never tasted before but was sure he’d like. In fact, he thought he’d like it better than anyone. That only he in the world could truly appreciate the delicate flavor of the ambrosia in his sweet wife’s veins, the tender give of her skin beneath his teeth.

–The Lass of Aughrim. He used to sing it for me. In fact I think –

She choked back a sob, and for a moment Gabriel was almost brought back to himself.

–What do you think, my morsel? he asked.

Gretta wiped away her tears furiously, with the back of her hand. She was really a little stupid, Gabriel thought. No survival instinct at all.

–I think he died for me, she said at last.

–The boy! Michael Furey! The boy who sang that song! Back when the zombies were fewer in number, he came to sing to me beneath my window, and I told him to run home or he’d surely be bitten by some terrible creature hidden in the bushes. He said he didn’t care, did not want to live if he couldn’t have me.

–And did he go home?

–He did, and a few days later his whole family was dead. It was the beginning of the end for our little hamlet.

She sighed, and moved out of Gabriel’s surprisingly tight grasp, throwing herself down on the bed to weep. By and by, her breathing slowed, and he knew she was sleeping. Tears filled Gabriel’s eyes. He had never felt like that himself towards any woman – willing to die for her. But he still liked to think that he was a good person. He would give her an hour’s respite before he began to tear her apart.

A few light taps made him turn towards the window. He hoped that it was something he could eat, to tide himself over, but it was just the empty plodding of weather. It had begun to snow again. Yes, the newspapers were right: snow and wraiths were general all over Ireland. With the last human murmurs of his mind, Gabriel pictured the snow falling softly upon the Bog of Allen and on the heads of twitching corpses and into the mouths of delectable, screaming victims. It was falling too on the hill where Michael Furey lay buried. It lay thickly drifted on the crooked crosses and headstones, and on the piles of bodies that no one was brave enough to inter or even to burn for fear of the contagion. The last remnants of Gabriel’s soul swooned slowly as he heard the snow falling faintly through the universe and faintly falling, like the descent of their last end – which was, it must be said, even then upon them – falling upon all the living and the undead. 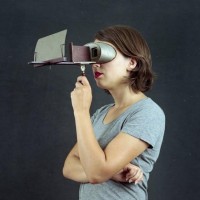 Adrienne Celt's debut novel The Daughters is out now from W.W. Norton/Liveright. You can find more of her writing and comics here.