I really did not mean to end up on a dark energy project.

In fact, the year I applied for jobs, it was a running joke. Inevitably every year there is some “cool” topic that you must insert into your job applications. My year it was dark energy. Studying planets? Better mention dark energy. We all chortled as we applied for all the jobs we would not get, and figured out how to include a paragraph about the inevitably far reaching vague overlap with dark energy.

I took a job on a dark energy project.

I love building things. I am an instrumental astrophysicist. I build spectrographs. These instruments take light, and turn it into rainbows. We use spectrographs to measure properties of stars, planets, and galaxies. We can learn how fast objects are travelling, and in which direction. We can measure how hot they are and deduce how long they’ve existed. We can measure all the different gases that make up the objects and in what ratios. We can watch solar systems be born and watch stars die. Not just pretty pictures, but the physics that governs the universe.

You did read that correctly. I build rainbow-making machines. Don’t judge.

I was drawn to my project because I think it is outrageous – we are using a novel instrument technique to measure dark energy, a truly mysterious piece of cosmology. By the end of this I want you to have a grasp of what dark energy is – but more importantly, I want you to have some idea how we do this wacky thing that is science.

One of the most misused and misunderstood words is “Theory.” In general use, “theory” tends to mean “an idea I had once while I spent an extended time in the bathroom.” Scientists, on the other hand, mean “a deeply developed and tested framework that has consistently passed observational tests and fits into our larger understanding.” This mismatch leads to people showing up to every talk I’ve ever given with very intriguing ideas as varied as a new way to make warp drives work, why our universe is actually very tiny but deceptive, or why Einstein was wrong (this one is exceedingly popular.) Usually they ask that I be able to disprove their “theory” in five sentences or less, ideally with no math.

This is sometimes a bit challenging.

I introduce this dilemma because dark energy comes out of a slew of interleaved theories. Many of which are elegant, all of which are a bit mathy. If you find yourself intrigued, I would invite you to come audit a class at your local university. No joke. Most instructors are happy to have you, you’ll be able to learn a ton more about cosmology, and you are not even required to have your own theory of everything. So let’s jump right in.

What is dark energy?

Dark energy is. Or rather, we think it is. Dark energy is a placeholder for something we haven’t discovered yet, but in our current understanding of the universe ought to be there. Is there. Depending on what it is. You see now why this is difficult. But intriguing because we can talk a little bit about how theory and observation help us build an understanding of physics.

(As a brief aside, here is what dark energy is not: dark energy is not dark matter. Dark matter does exist, and we have measured it. This stunning picture of the Bullet Cluster is an elegant demonstration of the existence of dark matter. We don’t quite know what dark matter is either, but it interacts gravitationally and so we can “see” it, even if it doesn’t radiate like “normal” (baryonic) matter. It was foolish to end up with dark matter AND dark energy, and it is confusing and unhelpful linguistically. Thanks, astronomers. If you think that’s impressive, you should check out our acronyms.)

The cosmic microwave background (CMB) is one of the most beautiful physics results, which not only has expanded our physical knowledge every time we’ve improved its measurement, but has resulted in one of my favorite comics. I love it because the theory and the measurement demonstrate such clear and tight symbiosis.

The CMB is radiation from the very early universe. Sometimes called “a baby picture of the universe,” it is a heat signature that has cooled throughout time. It was predicated initially by Alpher & Herman, and then “rediscovered” by Robert Dicke. His group was working on an experimental project to search for the signal when they got summarily scooped by two experimental physicists battling pigeon poop at a lab down the road. While trying to bring a radio antenna online, Penzias and Wilson found a background signal they couldn’t eliminate, no matter what. In a last ditch effort to get at their data, they climbed up and scrubbed off pigeon poop they thought might be interfering. It wasn’t, and they measured the CMB for the first time (and received a Nobel Prize for their troubles.) Measuring the CMB also confirmed the expansion of our universe.

This idea that everything is moving away from everything else that we call centerless expansion is a surprising enough result. But then it begs the question. What happens next? Does the universe expand forever? Does it collapse back on itself? What does an expanding universe look like?

If you humour me, and we accept that this weird expansion is happening, you might next assume that we’re expanding but slowing down. Gravity exists and even if the universe is expanding, an obvious answer is that gravity acts as a cosmic brake.

Ok, but we’re scientists, so let’s go measure it. That’s usually how we do it. We have some idea, using what we know and what we have measured before, and then we go check. Fantastic.

Several teams set about measuring the expansion of the universe in different ways, to see what the heck was going on. This is challenging because we have to observe further and further away from us (back in time.) This means studying fainter and fainter objects, which perhaps unsurprisingly can get hard. In 1998, scientists studying supernovae discovered that not only was the universe expanding but the universe was actually accelerating in its expansion. How is that even possible?

Well, that’s a bit of a kick in the pants for our intuition.

Everything in space is moving away from everything else. And it keeps going faster and faster all the time.

The universe didn’t always behave this way. That’s the even weirder part. The interaction between matter (dark & “normal” matter) and dark energy has changed throughout time. In early times, the universe was matter-dominated universe. That means the overall behavior of the universe was dominated by matter (and therefore the effects of gravity.) Now we live in a dark energy dominated universe. That means the effect of dark energy is the stronger, and causes our universe to expand and accelerate rather than contract. Understanding how and why the universe has evolved is one of the key questions in cosmology today.

So that’s what we’re doing. With a bucket full of theories to test, we’re going back to the measuring. There are quite a few projects using different techniques to measure this dark energy and its evolution throughout time. Our measurements will look at different times throughout cosmic history and measure the evolution of dark energy. We do this by measuring almost a million Lyman alpha emitters (LAEs.) These are young galaxies that are very bright at a particular wavelength of light that is often caused by star formation. Imagine these LAEs spread over time and space like a net. We measure the distribution of these galaxies, looking at the distortions in the net to understand the underlying peaks and valleys of the dark matter distribution. Our survey will take three years to complete, and net not only LAEs but a wide range of galaxies and stars. Astronomers are waiting to pluck those objects up and study them in more detail.

If this sounds like a lot, it is. Our project has taken over a decade from its initial bar napkin sketch to installing hardware on the telescope. We collaborate with institutions and companies around the world. There are hundreds of people involved at all different levels, from undergraduates to senior faculty. The budget is tens of millions of dollars, and that’s academic money – the amount of shared effort that isn’t “counted” in dollars would make that number look small.

We have started working out in West Texas, at the Hobby Eberly Telescope. We expect to start taking survey data in the Spring of 2015. And then the data analysis starts.

In the meantime, I’m just building 156 rainbow-making machines. Because who can resist looking up and discovering the universe? 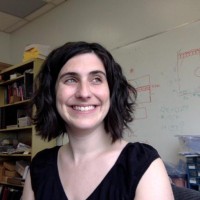 Sarah Tuttle (@niais) is an instrumental astrophysicist at McDonald Observatory, where she is the instrument scientist for the VIRUS spectrograph. In her off hours she funds abortions with The Lilith Fund, and runs AbortionIsHealthcare.com.