Hunger Is the Beginning of Every Folktale

Hunger is the beginning of every story. It might not be the most literal sort of hunger, but there is always something wanted, what the folklorist Vladimir Propp summed up as “lack.” There is something missing–to get the shivers, to find a lost brother, to make a solemn princess laugh, to have a child– and by the end of the story, that absence is satisfied– the lack is “liquidated.”

If the story begins with the lack of a child, then hunger becomes central. Food often replaces sex in folktales, and witches with some rule-bound delicacy are the fertility specialists of choice, second only to daring the fairies to give you a baby hedgehog, a snow-child, or an infant the size of your thumb. The trouble starts when a childless queen is given specific instructions– eat the white rose for a boy or the red rose for a girl, but not both. Eat the fair flower and not the bitter, black one. Peel both onions before you eat them. Folklorists would group all of these motifs under the number “T511– conception from eating,” with increasingly specific Dewey-Decimal-style numbers for conception from a flower or a fish, from swallowing a pearl or a peppercorn. Inevitably, the queen fails the interdiction, because she forgets the warning, or because the first thing she eats is so delicious she just can’t help it. Without that failure, there would be no story. Interdiction, violation: a rule is broken and the world is changed.

Desire is transformative, and transgressive: whether it’s an unpeeled onion or a noble lover, to want something, especially for women, can never be entirely benign. A common consequence for careless appetite in fairy tales is monstrous birth– a child that is less, and more, than the mother bargained for. In the story Prince Lindworm (ATU 433B), a queen eats up one of her two allotted onions skin and all, and gives birth to a dragon-son, who demands and devours a series of brides before meeting his match. The queen’s unchecked appetite is finally redeemed by the restraint of the last bride, who comes to the marriage bed in seven shifts (like the seven veils of Salome or the clothing shed by Ishtar at each of the seven gates to the underworld). For each shift she sheds, she demands the lindworm give her a skin, until he lies naked and slimy-white and must be scrubbed clean with lye (or whipped with lye, bathed with milk, and held to the bride’s breast, as in Tam Lin).

Asbjornsen and Moe, Norwegian contemporaries of the Grimms, conclude their version by noting that she succeeded “by her sense and her calmness and her courage.” Her leisurely undressing is a foil for the queen-mother’s careless consumption. But ultimately the transformation takes place, not because she masters her own appetites, but because she follows the advice of a witch (which her mother-in-law could not), and requires reciprocity. When her new husband demands that she undress, she does not say “no”– she says, “you first.” The lindworm is surprised at the girl’s boldness. “None of the others bade me [to undress].” “But I bid you,” said she.

The lindworm’s twin brother, the perfect son of the carefully peeled onion, is not the hero of the story. Instead, the burden of breaking the curse falls to the queen’s daughter-in-law. Grimms scholar Maria Tatar has observed that it is fairy tale girls who fight witches, while boys are pitted against (male) giants, wizards, and evil kings– like and like. Longing for a child, desire for a lover,  or hunger for a meal are a knife’s edge apart. Anne Sexton’s poetic adaptation of Hansel and Gretel begins: “Little plum/Said the mother to her son/I want to bite/I want to chew/I will eat you up.” Pyschoanalytic reads of fairy tales interpret witches as thwarted or rejected mothers, who want to keep their children safe inside of them, rather than let them grow up, become their parents, and take over.

Fairy tale conflicts hinge on the conservation of roles: as girls mature, they encroach on the role of the mother, pushing her to become the witch as she digs in and holds onto her status. So the onus for mastering the double-edged blades of hunger and desire is on the women, who save themselves and their sisters from traps set by their mothers’ mistakes.

This is the story in Tatterhood (ATU 733): when the queen eats two flowers instead of one, she has her gentle, obedient daughter only after she births a loud-mouthed, dirty wild-child, who is born riding a goat and waving a wooden spoon. But Tatterhood is the improbable heroine of the story– she is the bad, brave girl who, when a roving party of witches and trolls steal her sister’s lovely head and leave a calf’s head in its place, has a ship packed and readied, turns down the offer of a captain or sailors, and sets out “with her sister all alone. There was no holding her back, and at last they let her have her own way.”

Like the Lindworm, Tatterhood is the reckless hunger of her mother embodied, but she is also the family’s salvation, rather than the punishment she first appears. Tatterhood finds a king to marry her sister, but keeps the king’s son for herself. When the prince is less than thrilled with his ragged bride, she prompts him to ask her why she rides a goat, why her hood is so tattered, why she carries a wooden spoon. With every question she prods him to repeat, she contradicts him, and her words transform reality like any good storyteller:

So his bride asked him again why he didn’t talk, and told him to ask now why her face was so ugly and   gray?

“Yes,” asked the prince, “why is your face so ugly and gray?”

“Am I ugly? You think my sister beautiful, but I am ten times more beautiful,” said the bride, and when the prince looked at her, she was so beautiful, he thought that she was the most beautiful woman in the world.

Tatterhood’s transformation is not dependent on a magical kiss (or any outside intervention), but on the power of her own language. Fairy tale solutions are not a simple matter of redeeming transgressive hunger with restraint and obedience to the rules. Contrary to expectations, fairy tale rules are not universally agreed upon.

Burning the animal bridegroom’s discarded skin sometimes frees him, and sometimes only drags you into a long quest to find your vanished lover. Today, popular opinion finds that you should kiss frogs, but the Grimms’ princess broke her amphibious suitor’s curse by picking him up by one twiddly leg and dashing him against her bedroom wall.  Sometimes mysterious old women give you enchanted nuts to crack in a moment of urgent need, or a silver mirror that will tarnish if your brother is ill, and sometimes they give you poisoned combs and apples, or a piece of rotten thread to tie around your husband’s ankle that worsens the curse instead of breaking it.

In fact, in the bones of the story, the interdiction that must not be broken is indistinguishable from a command to rush right out and do the forbidden thing, since the story would happen just the same in either case. A rule that must be broken is just a rule. Fairy tale heroines navigate worlds that darkly mirror our own, in which appetite is a slippery set of contradictions. Food, sex, and power are wrapped up in conflicting rules, like the beautiful and the ugly twins, the mother and the witch, the prince and the dragon, two edges of the same knife, cutting both ways. 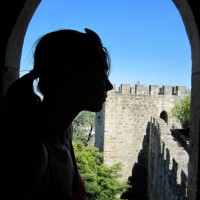 Kristiana Willsey is a folklorist who lives, writes, and teaches in Los Angeles/The Internet. She collects quotations (but not attributions), the artifacts of short-lived hobbies, intense fictional crushes, degrees, and cat hair.