“Or You Could Ask Us”: On Talking Over Muslim Women

While out with my sister in her mostly white neighbourhood, we walked by an elderly woman dressed in a velour tracksuit, plastic visor, and sunglasses I’m certain were purchased from an infomercial. She was speed walking but slowly strolled towards us, pulled down her sunglasses, looked us both up and down and hissed, “Jeeeeeezuuus.” It took a few seconds to register exactly what happened, but my sister and I couldn’t continue walking – we were laughing too hard.

Another time alone at a bus stop one late night after work, a man came up to me and said, “Why are you wearing that? You shouldn’t have to wear that.” He didn’t shout (usually my cue to walk away) but he seemed unstable and aggressive. I was too frightened to respond, I didn’t want to encourage him and I couldn’t laugh it off. The vibe he was giving off showed me he was capable of much more than aggressive unsolicited advice. I quickly walked away to a more crowded bus stop a few blocks down the road, only to keep looking over my shoulder in case he followed me. Not wanting to concern my loved ones and feeling slightly ashamed of not standing up for myself, I didn’t tell anyone.

In both instances, my sister and I were dressed normally – well, by our standards. I was wearing my headscarf and she her niqab (added face covering). Any variation of both cases have happened to every Muslim woman I know, regardless of whether or not they choose to cover. In my experience, it’s certainly not a daily or even weekly event – sometimes it doesn’t happen for months – but it’s happened enough times to be an ongoing issue in my life. These moments come in the form of the As Seen on TV sunglasses lady, which almost feels like being assaulted by an SNL character or the scary bus stop guy, or an innocent comment reminding me I’m Muslim (not that it’s easy to forget). Of course, not every interaction is unpleasant but the amount of stories I’ve swapped with my fellow Muslim women are countless, which is why it’s so frustrating to see our stories be told by other people.

Recently, I came across this story from the Australian Daily Telegraph in which a nice white lady learns a hard lesson. The author, Tanya Smart spends an afternoon dressed like a Muslim without actually having to be one. Dressed completely in black, she wears what Richard Dawkins respectfully likened to a trash bag: a traditional long loose dress called an abaya and a niqab. (I sometimes dress similarly to this, and it’s perfect if you’re cold and want to wear your pyjamas under a dress.) However, the author comes to the conclusion (after one day of dressing like the “other”) that life as a shapeless Muslim woman is hard. The poor girl can’t smile! Children laugh at her! Strangers gave her weird stares!

Regardless of how offensive this is, it’s also old, played out and boring. Having someone regarded as traditionally attractive play dress up to see what it’s like being marginalized in a controlled environment is hardly ground-breaking. Tyra Banks used to do it on her show all the time. Smart clearly thinks she’s being brave, and maybe she is. It certainly does take courage to wear a niqab; I don’t even think it’s something I could do. She thinks she’s experiencing or shining a light on the plight of poor, fettered Muslim women everywhere and perhaps she did get a taste of what it could be like for some. The thing is, I don’t care. I don’t wear a niqab, but there’s nothing she could have experienced that I haven’t already heard from any of the women I know who wear it every day. She could have just asked, but then again she probably wouldn’t have gotten paid for that.

I don’t live in a constant fear of being attacked, but, like any woman, it’s something that’s always in the back of my mind. Sometimes, the thought goes too far back and I assume that because I grew up and live in a relatively safe and diverse Canadian city, that sort of thing wouldn’t happen to me. Unfortunately, reality hits and I realize it could happen anywhere. Just this summer, a Saudi Arabian student in the UK was stabbed 16 times on her way to school. Like me and thousands of other women in United Kingdom, the victim was wearing a hijab.

Smart expressed her fear of being pushed in front of a subway car, but at the end of the day she was on a paid assignment and won’t ever have that fear again. She went home, took off those clothes and now has a fascinating story to tell over cocktails. When attacks against Muslims or anyone who appears to be Muslim are on the rise, when just being brown is actually just enough to be pushed in front of a subway car, racist orientalism isn’t going to help anyone.

The silencing and total lack of engagement in regards to Muslim women is dangerous. Under the false pretense of concern, time and time again I see my reality be dissected. It’s true, there are Muslim women who are oppressed and there are definite problems within our community. However, there’s almost only that one narrative. Being painted as a homogenous group of silent, invisible women puts me in the position of a victim before I’ve even had the chance to speak up for myself. Most recently, a video of Ben Affleck’s appearance on Real Time with Bill Maher went viral, it was great to see a sensible response on racism. The takeaway for me (other than how weird it is to now have to rely on the star of Gigli to defend Muslims) is the noticeable lack of female opinion in these discussions. Our absence proves to me that Bill Maher or Sam Harris aren’t at all concerned about women not driving or getting beaten by their husbands. To them, we’re nothing more than a political point or a device to push their racist and xenophobic agenda.

When I picture myself, it’s as a pretty average 23-year-old woman, and I can only hope I will someday be given the right to be average. So many times I’ve had people who’ve never met a Muslim before say to me, “You’re nothing like I expected!” I would usually just smile and change the subject to avoid confrontation, but once I asked, “What did you expect?” To which a co-worker responded in a way they variably thought of as a compliment, “You’re just so open!” If we are all as persecuted they say, if we truly can’t think for ourselves and need to be saved, who exactly are they trying to save us from? Because I can’t help but feel as though people like Bill Maher and Tanya Smart have a lot more in common with the guy at the bus stop than anyone who’s ever been on my side. 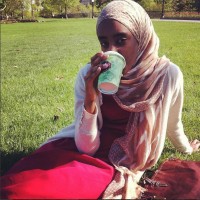