How to Tell if You Are in a Gothic Horror Novel

Previously in this series: Jack London

All animals are underfed, black, and vaguely eldritch. They all hate you.

You are a man. If you’re a woman, you are the love interest of the man, and you are dead.

All the women you know have died in childbirth. All the children you know are orphans. You are an orphan.

It’s foggy. If it’s not foggy, it’s smoggy. Or misty. Some form of particulate matter is in the air.

You are arranged to be married to someone sickly.

You tend to dismiss odd noises, prophetic ramblings of mad men, and the death of small animals en masse with a shrug and an offhand “It’s probably nothing.”

One of your children is crushed to death by a humongous helmet on the day of their wedding.

Everything is gloomy, like that song “Blue” by Eiffel 65 but replace the word “blue” with “gloomy.” You are gloomy. Your life is gloomy and the castle you live in is gloomy. Your underfed black dog is gloomy.

You are in a small town. There is a deep dark secret that only the members of the town know. The outside world can never find out.

It is also a sleepy little town. “Nothing ever happens around here,” says one of the locals. It’s true. Only three people live there and they all died in childbirth.

You go wandering somewhere very cold, and almost freeze to death, but are saved by the fortuitous arrival of a crew of explorers.

You are in a monastery.

You are on a moor.

There is something in the walls (or the wallpaper, or the pipes, or the floors).

Your house has a garret, which is firmly locked for reasons you will not disclose.

You hate everyone, except for one woman you are incredibly attracted to. She hates you.

At least half of the people you know are mad. If you are not yet mad yourself, you are probably well on your way.

The other half are ghosts.

You have recently discovered an old document of some kind. Most likely a journal, but possibly a map or letters written by a dead family member.

All the portraits in your house have peepholes cut in the eyes.

Important events in your life are always preceded by a storm, or at least a stiff wind.

Your house is very dusty and there are cobwebs everywhere. Basically everything is either dust or a cobweb. There isn’t even anything under the dust anymore, just more dust.

You call your bedroom your “chambers.” There is something at your chamber door.

You are near, or on, the ocean.

A book with a malicious spirit trapped inside was very well hidden somewhere no one should have ever found it, and definitely not ineffectually thrown in a chest or a tomb somewhere, but you found it anyway because you’re so curious and full of hubris.

The Evil Creature’s name is comprised entirely of consonants and punctuation.

There was a traumatic event in your childhood involving beach caves.

You are in love with your cousin.

Some form of Catholic imagery has just been appropriated and misused.

You have a love/hate relationship with a grotesquely malformed creature that you are repulsed by, but also pity.

You’re looking at something man was not meant to see. You can’t even comprehend it. It has parallel lines intersecting each other, and it goes on for infinity but you can see all of it, and other stuff that’s just really impossible. Like, think about M.C. Escher but then also scary and also your eyeballs are bleeding probably.

You have experienced unspeakable things. Everything has been resolved in the bleakest way possible. Your only hope is that you will take this secret to the grave. 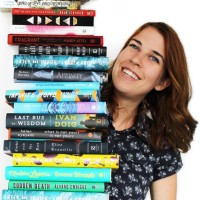 Abi Inman loves golden lion tamarins, macaroni and cheese, and the view from the Q train. You’ll find her talking about these things and more on Twitter.