Making Friends: The Haunting & May

Emily L. Stephens’ previous work for The Toast can be found here.

Making friends is hard, especially if you’ve never had them. Most of us learn the intricacies of friendship and romance as we grow up, giving us years to navigate that complicated social, sexual, and emotional landscape… and just as importantly, giving us years to heal what pain and heartache come with the territory.

How much harder it is to grapple with those growing pains as an adult. Every meeting and glance is charged with all the built-up fear and promise of a lifetime. Your peers seem to speak a secret language of ease and insincerity. In The Haunting (1963) and May (2002), two women defy their lifelong isolation to seek out the friendship and human connection they crave.

The Haunting’s Eleanor Lance (Julie Harris) has been hemmed in, watched over, and held back by mother and sister ever since a poltergeist visitation when she was three years old. In the decades since, she’s been cloistered and exploited by turns—“walled up alive,” she says—spending most of her adult life nursing her mother’s declining health. Now freed by Mother’s death, Nell sets off on her first-ever outing from home: she’s invited join a study of supernatural manifestations at Hill House, a New England mansion known for its desolate isolation, off-kilter architecture, and dreadful past. Dr. Markway, the scholar hosting the restreat, sums up that history with a terse “Scandal, murder, insanity, suicide.”

There she meets Dr. Markway (Richard Johnson), Theodora (Claire Bloom) —“Just Theodora”, a powerful psychic with a Mary Quant wardrobe, Luke Sanderson (Russ Tamblyn), the rakish nephew of the owner, on hand to protect his inheritance, and the Dudleys, the surly caretakers who’ve attended to Hill House during its long, empty period (and who relish warning the guests that the Dudleys leave before dark). Nell rapidly falls under the glamorous spell of her new friend Theo, and just as quickly becomes enamored of Dr. Markway.

Eleanor’s naivete amplifies every new experience. Every acquaintance is a kindred spirit, every compliment and courtesy a gesture of love. And every slight stings like betrayal. Her affections, starved for decades, are as contorted and unpredictable as the mazy hallways of Hill House, where one wrong turn can lose your way completely.

The Haunting (filmed under The Hays Code) never explicitly casts Theodora as a lesbian, but the implications are everywhere. She lives in Greenwich Village with an unspecified partner. When Nell, giggling like a girl at a slumber party, asks “Are you married?” Theo answers with a level gaze and a slow, deliberate “Noooo.” Their first night at Hill House, Theo invites Nell to her room, then nudges her way into Nell’s on a pretext. When Nell offers a toast “to new companions,” Theo steps close and offers the toast to her alone: “To my new companion.”

During Nell’s first—and only—evening alone, the paired beds and stark rectangles of their matching coverlets both emphasize her solitude and suggest the possibility of companionship. For the rest of the film, the two women are pointedly presented again and again as bedfellows.

When Nell feels most threatened—by the disturbances of Hill House, by her thwarted flirtations with Dr. Markway, maybe by her requited desire for Theo—she strikes out at Theo in coded terms. She calls her “a monster, you’re the monster of Hill House!”; she says Theo revolts her; she snaps “I’d rather be innocent than like you.” Not quite explicitly naming the homophobia of the time, Nell muses, “The world is full of inconsistencies. ‘Nature’s mistakes,’ they’re called. You, for instance.”

It’s easy to read Theo’s changeable moods as stereotyped jealousy and her character as possessive. But The Haunting allows some ambiguity: is Theo upset by Nell’s alternate warmth and hostility, by Nell’s obvious infatuation with Dr. Markway? Or is her anger directed at him? At best, he’s a married man toying with a sheltered admirer; at worst, he’s exploiting Nell’s infatuation to keep her at Hill House—for his research, for himself?—while urging her to “be innocent and receptive.”

Even without the complications of sexual rivalry, Nell learns that intimacy is an emotionally fraught affair, unpredictable and deceptive. Dr. Markway’s gentle courtesy could be mere gallantry or something more. Luke’s saucy banter is half flirtation, half habit. Theo’s insight into Nell’s fancies is both supernatural and shrewdly practical, and she deploys her verbal bombs in precision strikes.

The statuary of Hill House fills the film with faces and figures, haunting the background with the stiff embodiment of Nell’s deepest fear—and fondest desire. Even the doorknob that becomes the focus of the women’s first terror bears a human face.

It’s no accident The Haunting’s most frightening scene occurs after Nell and Theo, new bedmates, spend an evening giggling and drinking in their nighties, swapping secrets, or that it ends with Nell’s terrified question: “Whose hand was I holding?” Eleanor is both terrified of and desperate for closeness, proximity, intimacy… and deeply uncertain whose intimacy she most craves.

Like Eleanor Lance, May Canady (Angela Bettis) of May (2002) both craves and fears intimacy. Her mother fussed and fretted over May’s “lazy eye” (amblyopia), magnifying her childhood anxieties and keeping May shy and fearful, encouraging her to sublimate her need for companionship into a porcelain doll named Suzie, who stays safe and secluded in her glass display case.

May grows into a lonely young woman of distinct parts: a capable veterinary nurse, reassuring to customers and comforting to her incoherent employer; a stumbling wallflower, practicing conversations and apologies alone; a gifted seamstress who designs whimsical clothing for her off-duty hours; a careful people-watcher accustomed to sorting people into a collection of perfections and defects. Bettis endows May’s collection of wariness, self-reproach, and bursts of openness with a twitchy charm that carries the film.

Like Hill House, May’s apartment is peopled with false figures. She confides to her collection of dolls everything from daily events to romantic daydreams—including her crush on Adam (Jeremy Sisto), who works nearby, close enough for May to try (and fail) to engineer meet-cutes on the street, at lunch, at the laundromat.

And like Nell, May finds herself at the apex of a love triangle. As flirtation with Adam feeds May’s blossoming confidence, coquettish co-worker Polly (Anna Faris) is drawn to her: to her brief bursts of assurance, to her bright eyes and smile, to her quiet quirks—and to her vulnerability.

The Haunting leaves Theo’s motives ambiguous, allowing room for the viewer to interpret her as selfish or protective, but May’s Polly is transparently manipulative: inelegantly and obviously using her wiles on May for her own convenience, dropping the seduction the moment she coaxes out a promise, swearing she’s “dead serious” about their romance, then catting around and laughing off May’s heartbreak.

Adam’s motives are less obviously self-serving, but just as self-centered. He condescends to May from the very beginning, positioning himself as her teacher. He mocks her clumsy attempt at smoking, tossing her his cigarette pack and instructing: “Practice.” He backs off from her aggressive embrace, blurting out, “Jesus Christ, who taught you how to kiss?” with the implication that she needed teaching. When they first lie together, he senses her anxiety and overwrought passion; instead of pausing to ask what she needs, he directs her, even specifying how she should breathe.

And he watches her. Adam watches May as intently as she watches him, but only when his ego is in play: when she gushes compliments, when he shows off his paintings, when he screens his student film. May desperately wants to be seen and loved for who she is; Adam’s not interested in seeing May, only in seeing himself reflected in her reaction.

He expects a reaction… a big reaction. Adam styles himself as an outsider; May is a true outsider. When she hesitantly hopes he won’t find her work and hobbies “gross” and “weird,” Adam assures her, “I love gross!” and “I like weird.” But when he takes her home to see his artwork and his ironic knickknacks—like the knife he brandishes at her, declaring, “You’re onto me. I’m a psycho” before plunging into her—we see that Adam likes the stagily weird, the coyly gross. “Does this freak you out?” he asks, all expectation. May’s offhand response: “Nothing freaks me out.” Adam’s affected morbidity is as phony as that stage knife. May’s weirdness is bone-deep.

Wading into the world of romance and relationships, May finds—to her harm—that she’s not alone in seeing others as a collection of perfect and imperfect parts, an assortment of desirable traits to use and less attractive parts to ignore or discard. Her mother instilled this ugly idea in May, but Adam and Polly reinforce it.

Dr. Markway says of Hill House’s manifestations, “People always want to put an easy label on things, even if it’s meaningless.” Both May and The Haunting discourage the facile definition that deadens nuance. Neither insists upon defining its characters’ sexuality. Both show a range of affection, attraction, even obsession, from several vantage points. Both are offbeat examples of slow-smoldering tension, the kind of quiet, thoughtful character study that’s often sidelined in favor of bigger, brasher movies. Both show the pain and brave hope of sheltered protagonists thrusting themselves into intimacy with strangers, intoxicated by possibility, weaving back and forth on the invisible line between affection and passion, with horror dancing all the while in the background. 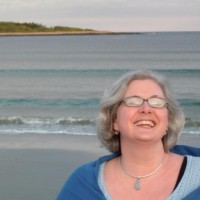 Emily L. Stephens is a freelance writer, archaeology student, and caterer from Portland, Maine. She writes for The A.V. Club, blogs at macbebekin, tweets as @emilyorelse, and is a founding contributor to The VideoReport.