Hi, My Name is Heather and I’m a Recovering Lobbyist

During a fundraiser, a congressman catches my eye and waves me over. He’s in the middle of a conversation but reaches out for a two armed hug as he says my name: “HEATHER!” He holds me by my shoulders and asks me how I am. “And how is mom?” Mom is good. Mom is away at Columbia University earning her Master’s in Journalism. “Please tell her I said hello. But wait. Have you met my friend?” He’s personable and introduces me to the candidate for whom he is fundraising. “This is Heather! She’s the federal lobbyist for Big Name Organization.” She says that she’s been looking forward to meeting me.

I see the congressman again a month later after becoming unceremoniously unemployed. He stops to introduce me to Nancy Pelosi. “I want you to meet Heather,” he says to the House Minority Leader. “She’s with…” his voice trails off. “This is Heather.” I continue for him, “This is Heather. She is nobody.”

At 23 I became a lobbyist and at 30 I was not. You should know that I wasn’t born into some political family. I was born to a black man from Birmingham, Alabama who was raised in the Deep South during the Civil Rights Movement. My father still expected to see a fountain labeled “COLORED.” My mother was from a coal town in West Virginia and wanted to spend her days speaking Castilian Spanish under palm trees in Barcelona. Together they wound up with a child who watched a lot of CSPAN and prayed at the altar of Ted Kennedy. I was not raised to believe politics was the be all, end all, or even in my future, and yet I found myself wanting for nothing more than to be seated at one of the desks on the floor of the Senate.

When people asked what I did for a living I would say “lobbyist,” which was quickly followed by “but not for like, guns or anything.” There is this idea of someone in my (past) position which is mostly white, very male, making deals in back rooms or in four star restaurants over a glass of fine wine. With every agreement, a toast was made as the fat cats were thrilled to screw over the American people. Unfortunately, I was the boring kind of lobbyist who was in it mostly for hobnobbing with members of congress. You should also know that somewhere during adolescence I fell in love with the House of Representatives.

One day during my former life, my mother went on a trip and sat next to a member of the House on the return flight home. “I told him that I was Heather Barmore’s mother,” she said excitedly.

“YES! And he said ‘Oh! Heather is great!” She was beaming.

“That was nice of him,” I grinned. Though you might find it insignificant for me, what I had always wanted for a member of the House to know my name. It’s weird but the truth.

Meanwhile my father would quiz me on what the president did or didn’t do and who he should talk to about it. During an annual gathering he would stand beside me as I spoke to legislators. I would then make sure he got in his face time and oh boy, did he lay it on thick with the handshakes and grins. If I didn’t know any better I would think that he was the one running for office. I found it all a little embarrassing as my father squeezed my shoulder in approval.

And there we all were, me in my dream job and my parents thankful that their tuition dollars weren’t going to waste. At some point internal politics outweighed the external politics that we had all been there for. The allure was lost and gave way to terrible anxiety. I stopped being happy and instead panicked each morning and was popping Klonopin by afternoon. At the end I realized that what had been my dream wasn’t sustainable as a permanent life nor did I want for it to be. At the end I craved something other than politics, though what I am still not sure.

What I do know is that when Jill Abramson said that she didn’t feel shame when she lost her job and when my friends shrugged and said, “Hey. It happens. It will be fine,” I responded with a sigh because really? I felt like I had failed. Without a title under my name on my business cards and fielding phone calls on No Child Left Behind, who was I really? I was told to embrace my newfound “freedom.” I worked in politics. Everything was now in past tense with my present being full of “I don’t know” and skirting the issue.

Is there a support group for this type of thing? People who made their work their life and suddenly found themselves without it? I needed a support group with others who were once identified by their jobs. My turn would come and I would introduce myself, “Hello. My name is Heather and I am a recovering lobbyist.” They would all say “Hi Heather” in unison and I would say “it’s been three months since my last conversation with a member of the House of Representatives” and they would all nod in understanding.

I was overwhelmed by a profound sense of loss because I had no idea what would or should come next. It didn’t matter that this was for the better and that the manifestation of my unhappiness was destroying the rest of my life. It also didn’t matter that I was/am a strong black woman who never really gave a damn about what others thought. I wasn’t raised to make work my life, but my job was my crutch. A conversation starter. Something with which to impress people. I was no longer Heather Barmore, lobbyist. I was simply Heather. If you were to ask me now if things are better or if I have come to some place of happiness when it comes to being without the one thing I thought that I was meant for, I will have to say no. I have not. I still carry shame and tip-toe through my small town in hopes of avoiding people from my former place of work. When I am asked what I do for a living, I still don’t know what to say. “Finding myself”? “Between things”? At some point I stopped smiling and now I am starting to once again.

A few months after losing my prized position I stop by the office of a representative who had once been a foe but turned out to be a fantastic friend. He embraces me and asks me how I am. “You know,” he begins, “this is a real blow to my office. You have done so much for us. Now who do I call? What can I do?” I stop him because I am sure he could call and whip up a job for me and there I would be, on my merry way, focused on a new cause in the District of Columbia. I think for the briefest moment that all of this can be over: the embarrassment, questioning my purpose, wondering what to do with my life. All of these self-imposed fears can be alleviated by accepting an offer for help but in that moment a burst of clarity or insanity.

“Actually, Congressman. I’m okay. I think I’m good for now.” And with that, I bow out, gracefully. 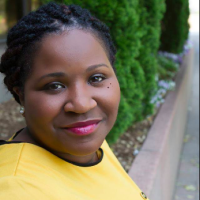 Heather Barmore is a freelance writer, blogger, avid C-SPAN viewer and recovering lobbyist. She lives in Upstate NY with the world's worst cat.