on November 21, 2014 in Gentleman Scholar Sponsorship

“The White Marmorean Flock” does not, as I initially thought, have anything to do with mammary glands or geese. It is a term, created by Nathaniel Hawthorne and then coined by Henry James, for a group of nineteenth century American expatriate lady sculptors working in the Neoclassical style: Louisa Lander, Harriet Hosmer, Anne Whitney, Emma Stebbins, Edmonia Lewis, Margaret Foley, Florence Freeman, and Vinnie Ream. Wikipedia generously divides them into the category of lesbians and non-lesbians and explains nothing else about them—which is really a shame because in an age where taking up drawing was considered an admirable means to charm your way into marriage, these women ran off to Rome and created big-ass sculptures with their hands, a chisel, and a literal ton of marble.

In addition to dominating a medium that even today struggles with being overwhelmingly masculine, the ladies of the so-called “flock” did scandalous things such as: living alone, living with un-married men, living and sexing with other women, living at all, modeling in the nude, encouraging men to model in the nude for them, and making Nathaniel Hawthorne feel uncomfortable. For all their awesome efforts, male American novelists lumped them together with the lame term “the White Marmorean Flock,” which despite its complete inaccuracy (they weren’t even all white! Edmonia Lewis was one of the earliest female artists of color in America!) is still used on the Met’s website.

Now, Nathaniel Hawthorne, like every other male novelist in the nineteenth century, had some lady problems. But Hawthorne’s lady problems stand out among his counterparts because Hawthorne knew how to write an ass-kicking female heroine. Let us take this moment to hail Hester Prynne, everyone’s favorite priest-humping Puritan, by marking an invisible A across our chests Catholic sign-of-the-cross style. What Hawthorne struggled with, however, was letting the ladies kick ass and own the narrative as they should—for his one Hester, Hawthorne also created countless strong female characters who ultimately end up dead, ostracized, or persecuted. There’s plenty of proof that Hawthorne loved a strong, independent woman, but he sure as hell didn’t know how to handle them.

Which brings us to The Marble Faun. In 1857, Hawthorne went on vacation, and he had a horrible time. He visited Rome and all he could do was mope about how all the art was too old. His wife, Sophia, was a painter herself and made a point of visiting the studios of any and all prominent American artists in Rome, dragging him along with her. Among the artists the Hawthornes hung out with were Harriet Hosmer (pictured), Louisa Lander, and William H. Story. Of all the artists Hawthorne mentions in The Marble Faun, he gives the most credit to William H. Story. He even models the novel’s hero, a sculptor named Kenyon, after Story. Hosmer is given a single shout-out for her statue Zenobia in Chains and Lander is not directly mentioned at all.

Louisa Lander had all the potential to be a favorite artist of the Hawthorne family. Hailing from Hawthorne’s hometown of Salem, she quickly developed a friendship with Nathaniel Hawthorne during his visit to her studio in Rome. Hawthorne writes of his first impressions of Lander,

“There are very available points about her and her position: a young woman, living almost perfect independence, thousands of miles from her New England home, going fearlessly about these mysterious streets, by night as we well as day; with no household ties, nor rule or law but that within her; yet acting with quietness and simplicity, and keeping, after all, within a homely line of right”

Hawthorne was quite taken with Lander not only for her ability to walk around successfully both “by night as well as day” (congratulations on walking, Louisa!), but because she could act so independently and still remain “homely.” To put it simply: Hawthorne was deeply impressed with the idea that a woman could exist free of a man and not turn into a raging whore. He was so impressed that he agreed to sit for Lander over a dozen times as she modeled a clay bust after him.

Lander eventually completed the bust of Hawthorne, which it seems no critic can comment on without noting how dang sexy Hawthorne looks in Lander’s portrayal of him. Between the ample man-chest, the square jaw, and the plump lips, Lander’s bust was certainly a departure from Charles Osgood’s 1840 portrait of Hawthorne. Lander’s success with Hawthorne caused a stir among the male artists working in Rome and America at the time. Cephas Thompson, who had been commissioned to do a portrait of Hawthorne in 1850 after the publication of The Scarlet Letter, was quick to decry Lander as she threatened his prominence among the literati in need of portraits.

And then in 1858, Lander’s critics had the perfect opportunity to scandalize and forever remove her from the graces of the Hawthorne family. In his essay Dearest Beloved: The Hawthornes and the Making of the Middle-Class Family, Thomas Walter Herbert explains the unraveling of Lander’s relationship to the Hawthorne family. While Lander was back in America for a visit, her cousin John Rogers went about Rome while leaking the story that Lander “has the reputation of having lived on uncommonly good terms with some man here [in Rome]. She is very vain of her figure, and a number of respectable people affirm that she has exposed herself as a model before them in a way that would astonish all modest Yankees.”

Cephas Thompson was the first to knock on the Hawthorne family’s door in Rome and inform them of the moral depravity that Lander had shown. William H. Story spearheaded an investigation of Lander’s character, but Hawthorne needed little convincing that the story was true—fearful of what conclusions might be drawn from his contact with Lander, he didn’t hesitate to distance himself from her. In his journal, he wrote an account of turning Lander and her sister away from his doorstep. He later explained in letter to Lander that, “as guardian of the sanctity of his domestic circle, he is compelled to be more cautious than if he were acting merely for himself… Miss Louisa had been made fully aware that reports were in circulation, most detrimental to her character.” And now we can congratulate Hawthorne on probably being one of earliest white American males to use the term “sanctity” as a means to oppress an already marginalized group in the name of protecting his family from deviant lifestyles.

Hawthorne did pay Lander for her bust of him, though begrudgingly so—as he wrote in his journal, “The bust, my friends tell me, is not worth sixpence, but she did her best with it.”

Hawthorne published The Marble Faun in 1860, shortly after his return to America. The novel’s two female characters, Hilda and Miriam, are both painters. Miriam describes Hilda’s life in Rome, “You breathe sweet air, above all the evil scents of Rome; and, even so, in your maiden elevation, you swell above our vanities and passions, our moral dust and mud, with the doves and the angels for your nearest neighbors” (Hawthorne 896). Throughout the novel, Hilda is associated with whiteness and marble. She is even followed around by flocks of doves in the streets of Rome. Miriam goes so far as to suggest that, “As an angel, you are not amiss; but, as a human creature, and a woman among earthly men and women, you need a sin to soften you!” (Hawthorne 1025). It is implied that Hilda’s perfect, white flesh is itself as hard and impenetrable as marble.

As is often the case with Hawthorne’s female characters—there are almost always two, one is good and all the boys like her; the other is bad and all the boys like her but they don’t want to say so— Miriam is the foil to Hilda. Instead of whiteness, Miriam is of “mixed race,” and Hawthorne speculates that, “there was something in Miriam’s blood… in her recollections of her mother—some characteristic, finally, in her own nature—which had given her freedom of thought, and force of will…” (Hawthorne 1215). A large portion of the novel’s plot is dedicated to a strange spectral figure that follows and haunts Miriam for some past crime she has committed against him.

Many critics have made the case that both Hilda and Miriam are based on Louisa Lander. The description of Hilda’s blissful independence echoes Hawthorne’s journal entries about Lander. On the other hand, Miriam’s maligned past and dangerous “force of will” imply that she might be post-scandal Lander. Either way, Hawthorne makes a careful effort not to mention the lady sculptor, or any of her contemporaries aside from Harriet Hosmer, who somehow managed to transcend the Flock.

Lander and the other female sculptors in Rome created a massive body of work that rivals any of their male counterparts. For all their efforts, it only took a mention of “the White, Marmorean Flock” in Henry James’s biography of William H. Story to brand them so for all of history. 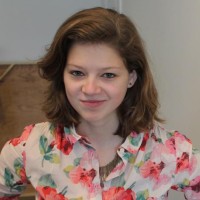 Lindsay Lynch is a freelance writer and illustrator, who lives in Nashville, Tennessee. Her favorite author/food pun is either "Edgar Allan Po'Boy" or "Toni S'Morrison."