“A Mythical Creature”: My Genderqueer Childhood

It was my best friend, Anna, who I told first. That kind of friendship you have when you’re eleven – where you see each other all day at school, then rush straight to the telephone to call when you get home. ‘Do you ever feel like you were born into the wrong body?’ It was a genuine question – I knew I’d never heard anyone else say it, but maybe I was being stupid, and perhaps other people felt that way all the time. She didn’t quite know, but guessed that maybe she did, sometimes. I told her more, hoping that she might agree – about feeling like my skin was closing in around me, that I could feel my mind willing it to be something else. Then we talked about homework, and The X-Files – and I didn’t tell her the thing I was really thinking, which I knew was crazy, but also sort of believed was true. That I was really a mermaid, and that if I concentrated hard enough, hit some kind of magic formula, then my body would get the message and change appropriately.

The seed of it was planted by my parents – not necessarily my being trans – I don’t have an explanation for that, and don’t think that I need one. But maybe the start of a fantasy that re-emerged when my mind could no longer make sense of the reality around it. Calling me their ‘little mermaid’ was blameless – my other mother telling me that her brother had seen mermaids from his fishing boat and that they were totally real was probably not the best call. Still, I mostly grew out of telling people that I was going to be a mermaid by the end of kindergarten – and though I was (justifiably) obsessed with Hans Andersen, and practiced my best dolphin-style swimming whenever I could, it was more of a familiar and comforting daydream than anything else.

Knowing what I do now – about trans kids, trans narratives – narratology itself – I want to put a neat retrospective structure around it all. We use whatever cultural tools we have to hand – and, for children without words to know themselves, stories of creatures not quite human, who can make a deal to change their form into what they’ve always dreamed of being – that stuff sticks. The leading trans youth charity in the UK is called Mermaids – Jos Truitt wrote about watching the Disney version while trans.

I don’t know if it begins to make sense that way because it genuinely explains why I felt the way that I did, or because I want it to make sense that way – so that I wasn’t quite as mad as I fear I was. This is the point where I’m tempted to make it sound kind of cute and quirky and whatever the genderqueer version of a Manic Pixie Dreamgirl is – MPDNB? But it’s not that – though it was beautiful, in its way, as well as terrifying.

It started with drawing, and puberty – the latter hit early, and with a vengeance – the former crept in slowly, around the edges of other projects, in the margins of notebooks, and then into its own thick pads of artist’s paper. Pop psychology red flag: none of my mermaids had faces. Bodies that were an amalgam of different desires – prominent larynxes, veined and muscular shoulders, arms, torsos – pert breasts that could be described as boyish. Tails scaled in loving details. I drew at least one of them a day.

Without noticing, it spread. Swimming was the only thing my changing, ungainly, hated body was any good for, apart from music – where everything went quiet and soft. My coach taught me to hold my breath long enough to swim lengths underwater – unbeknownst to him, I was trying to figure out a way to learn how to breathe it. I pretended my enormous feet were fins. I never wanted to go home.

None of my mermaids ever transitioned into human women. It was their in-between state I was obsessed with – I stopped reading the story, watching the movie, when she changed. It was that impossibility that I needed for myself, for my own skin. One day, I needed it too badly to care about how strange it would make me if I gave in and tried to reach it.

Every shitty documentary about trans people has that moment where the subject stares into a mirror, with the camera over their shoulder – putting on makeup, tying a tie, making wistful eyes at themselves. In private, in trans spaces, we talk about those moments – when you stole your dad’s shirt and tried it on for the first time – or shoplifted a lipstick, and wore it only in the privacy of the bathroom. Four years before I ever locked my bedroom door and bound my chest flat, I locked myself into the bathroom with my oil paints and went to work.

It must have taken hours – thank god for my parents’ acceptance of the need for adolescent privacy – and when it was finished the skin underneath was burning from an allergic reaction – and I still wasn’t perfect. I didn’t know whether to cry from how pointless it was, or take off my glasses and pretend that it was nearly right, when you couldn’t see the details. From the hips down my legs were a deep, turquoise green – tiny little thumbnail scales individually shaded and tipped with iridescent glitter. If I crossed my feet at the ankle my tail was finished – I poured a bath, a cold one, with salt, and got in and under the water.

Right down in the core of my mind, the part that watches the rest, I must have known that nothing would happen – from the shame I felt as I was doing it, and how much I hated myself for letting myself do it, afterwards. Or maybe that’s just the same response as the one you get when giving way to any other delusion – the shame of being too convinced, too far gone to stop yourself. The disappointment was too much to bear. I didn’t want to have to work out why I’d done it. I washed myself off, and pushed it down.

I was thirteen the last time I, half-jokingly, tried to test if there was an unreal reason for the way that I was. By this time I had already been cast as the romantic male lead in several school plays – a dearth of ‘real boys’ will do that. My father’s oldest suit had made its way into my closet, along with a handful of hand-me-down sweaters and waistcoats. I had my first moment of articulating the shock and recognition I felt – when I looked in the mirror, wearing my father’s clothes, and saw a teenage boy staring back – pretty, yes, but not a girl. So when we went to the ocean that Easter, and I called out an invitation under the water – that if they were coming for me, they should come now – I already knew that that wasn’t what I needed. There was no escape there any longer. I had my first real panic attack that holiday, and my shoulders ached from hunching over my chest.

The world seems to be changing so fast when it comes to trans awareness – already it feels like my childhood is an alien place to the kinds of kids who can say who they are at age six – petition for blockers before puberty hits them. I’m amazed – wonderfully so – at how things are getter better – for some trans kids, at any rate.  But still – there’s an idea, and it seems to be getting stronger, that ‘you always know’. People who aren’t seem to expect that people who are trans come with an inbuilt knowledge of how it all works – that we have maps to follow, and a standard Damascene moment.

And I think that it was only in the mid-’90s that it was easier for me – a kid with the internet, two library cards, and a liberal family – to believe that I was a mythical creature, than it was to understand that it was possible to be neither male nor female.

My body now is a work of art, and an impossibility to many people – delicately balanced between opposing signifiers. I wonder what fantasy I would have made for myself, if I had known these possibilities, when I was younger. I wonder if I could have made plans instead. 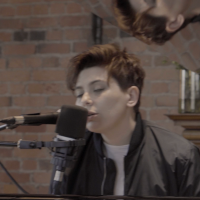 CN Lester is a musician, writer and LGBT/feminist activist living in London. Widely available on all good/ubiquitous social networks.