Jesus and the Twelve Disciples Do Stick-and-Poke Tattoos

If they did tattoos in ancient Palestine, Jesus would get one, for sure, along with all the disciples. They could get matching stick-and-pokes. They’re all tough guys, those fishermen and carpenters, James and John and Simon Peter, with bulging triceps from heaving nets and sawing up chunks of wood. Maybe Matthew the tax collector wouldn’t be so into it – he works for the government, after all, and his skin is smooth and soft. But the others surround him with taunts, ‘You’re chicken, Matthew,’ and he’s easily persuaded. The disciples are all pretty into religion, of course, so maybe they’d all get their favourite verses inscribed. But it would be better if they just got something weird and awesome, like a loaf of bread or a radish. After a few cups of wine, Luke the doctor brings out his sharps. Matthew, eager to please, produces ink (did you know the first written language was for the purpose of accounting?) and watches anxiously, but also curiously, as they dip the needles in ink and prick designs into each others’ hairy muscly forearms.

‘Does it hurt?’ Thaddeus asks, trying to play it cool, and of course it does but Simon Peter’s tough, and even though the others ask him three times he denies it. He watches the needle and hears the tiny pop as it pierces his skin. Luke wipes away the ink with cool water and there it is, like magic: a row of miniscule dots, close together. Swimming just below the surface.

Simon Peter misses being a fisherman. He used to live beside the Sea of Galilee, where the air is salt on the lips. He’d go out in the boat for a day or two and come back, deck slippery with fish, still wriggling, shining like silver money. The way they caught the light: he loved that. They’d unload the fish and sell it there on the lakeside, and keep some for dinner. His wife knew so many ways to cook fish that he never got tired of eating it. Fish, bread, grapes, olives, goats’ cheese: what else was there? Maybe for his next tattoo he’ll get an anchor. He’s thinking about that, already.

Everyone wants to tattoo Jesus, but it’s a big responsibility. Probably Simon Peter ends up doing it, because they’re best friends. They’re all sitting around eating, drinking wine, tattooing each other on the floor of someone’s living room. Maybe they sing. Judas plays guitar, and James the Younger has a tambourine, which is a bit dorky but when you’re travelling a lot you can’t really lug a whole kit around. It’s a shame because he’s wicked good, remember that house show in Cana, all of them cutting sick, the neighbours pressed up against the windows, screaming and trying to touch their robes? That guy who couldn’t walk, and got his friends to bring him in on a mattress? They were a tight unit, they were superstars, the music lifted them above the crowd, they vibrated together up to the sky and the clouds opened up: rays of light, flames and doves, so it seemed to them anyway, at the time.

I bet Matthew plays something nerdy like the lute. He definitely collects Star Wars figurines. How did he become a tax collector? I mean, he had to eat, same as anyone. He did well at school; numbers made sense to him. People were more baffling. He kept his head down, learned the lute, did abacus club at lunchtime. Graduated and got a government job because his father told him to.

‘The Romans are the future,’ his father said. ‘They’ve got the best damn roads and the best tax system in the world. Don’t underestimate that, Matthew. Get on the good side and stick there.’

So Matthew applied and became a tax collector.

‘It’s good to have men like you on board, Matthew,’ the official told him, putting out a broad hand, which Matthew grasped limply. The official loomed over Matthew, who had always been the smallest in his class. Weedy little Matthew. Kicked in the shins at recess, left to the side in ball games. When he became a tax collector, he’d sometimes knock on a door and come face-to-face with one of those guys from school. He’d make his expression completely blank, and then he’d read their debts off a scroll that trailed to the ground, adding extra items for each half-remembered shove and taunt, and he’d offer to loan them money at a three hundred percent return. And if they couldn’t pay it, he’d tell his boss, and his boss would send some heavies over, and Matthew sat at home by himself, at his big table, with a dim coal burning in his chest. But now: now he’s got twelve friends, and they all look out for one another, and he’s got a tattoo to prove it.

Simon Peter is tattooing Jesus, and Luke supervises, because it’s important not to screw this up; he’s the keystone, the one they all lean on. (Do you ever wonder if Jesus gets tired of the disciples, sometimes? Imagine having twelve of your friends around you constantly, asking you how to live, squabbling about which of them is the best.)

Most of the disciples have got their tattoos already. Twelve radishes, no, thirteen including Jesus, one each. They take a long time, these tattoos. Dot after tiny dot, dip the needle, wipe it back.

They’re all a little different, all a bit wonky, dotty lines still smudged with ink, but beautiful. The disciples hold their arms out like crooked wings, turning them this way and that, learning this new part of them. They’re delighted children, entranced by their own skin. They are thirteen guys with a real proper bond, one that you can see. Jesus says they are all brothers and sisters, but he says that about everyone. Now they can all point to their matching tattoos and prove that they’re special.

They pass around a jar of wild honey, rub it on their forearms to clean the wounds.

The disciples know a few things with certainty. They know not to scratch their tattoos, especially when they start to scab, no matter how itchy they get. They know they’ll all stick together, now and forever. Three years they’ve all been traveling now, from town to town, going days without a bath in the dirty sweaty heat, the road rubbing holes in their sandals, sandals rubbing holes in their heels.

Sure, they’re not all as smart as Jesus, and sometimes they fall asleep at prayers, but they are all trying really hard. They know they’ll get there.

A lot of the disciples have similar names, and the rest of them have two or three names, so it’s hard to keep them all straight. There’s Jude who is also called Thaddeus, Nathanael who is also called Bartholomew, Simon who is also called Peter. Andrew, Matthew, Philip, Thomas, another Simon, John, two Jameses, and Judas. For the record, Jesus was actually called Joshua, probably, which doesn’t matter as much as you might think. They have other friends too, of course; Lazarus, Nicodemus, people in different towns with floors to crash on. Judas hasn’t betrayed anyone yet.

(No-one can remember who suggested radishes, or why.)

Thomas is the last to get his tattoo. The others are so impulsive, they jump into things without thinking, like puppies. Thomas is slower to commit, needs to weigh up the pros and cons; he needs to make sure it’s going to be okay. But he lets Luke tattoo him, in the end, because he doesn’t want to be the only one, the only chicken; even dorky Matthew’s got one now. And it’s all right, it doesn’t hurt that much, it’s slow and methodical, you just have to be patient, follow the lines. It’s not so difficult, and at the end there they all are, Jesus and the twelve disciples, joined together by these dots and lines on their skin, and more than that, joined to dots and lines on other skin, all the way backwards and forwards through the story of the world. 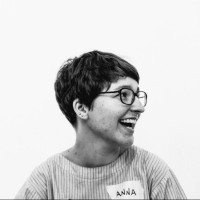 Anna Dunnill is a writer and artist from Australia. She makes zines, installations, drawings, embroideries, and stick-&-poke tattoos, which you can find here.