What to Do with a Dad Once You’ve Got One

Diana Hurlburt’s previous work for The Toast can be found here.

When I was two my father committed suicide. This is why patriarchal religion was never going to work out, I once joked to my mother, because my family is incapable of telling the truth plainly. She didn’t laugh, partly because suicide jokes aren’t funny and partly because of the ditty running through her mind: does that mean she’s really an atheist now? Wait, what if she joined one of those weirdo pagan religions? What if she starts sending me menstrual blood paintings? Growing up with no father in a very traditional-family-oriented religion was an interesting experience. Surrogate dads were obtained for big events like my baptism and daddy-daughter sock hops and bowling nights, the dads of friends at church who had one daughter or several already, and room for another, at least for one night. The significance of the eternal family was mostly lost on me. God the Father never seemed very personal, either, largely because I wasn’t sure what He should be like. What were dads like? Luke from Gilmore Girls? Red Forman with superpowers? My best friend’s dad, who looked kind of like Alex Trebek and was adept at paternal pastimes like collecting BMWs and cooking spinach because he knew I hated it? God the Father didn’t seem too dad-like. Who had taught Jesus how to change a flat tire? Probably Joseph. Most of the kids in my favorite books were orphans anyway. I had a mom at least, and mostly that seemed like all that was needed. We camped and visited weird wood-carving museums, she and I and my sister. Three tall, slightly standoffish swans, whole unto ourselves. I liked the number three as a kid; I collected gewgaws in sets of three. Three blown-glass goose figurines, three ceramic skunks, three pewter unicorns in a shadowbox on my wall. My family.

When I was ten my mother remarried. Suddenly I had A Dad. Now people could stop asking me how my dad had died (a question I didn’t know the answer to until I was twelve or so anyway). My mom had married my stepfather in the Orlando temple, and I had been sealed to them, so the eternal family question was no longer anxiety-inducing for my mother. It hadn’t been for me, and only would become so in later years, when as a snotty teenager I ruminated on the unfairness of not being able to ascend to the highest levels of Heaven without some man’s help. This was not a stage I got over. As a tweenage person, however, my concerns were more mundane: what did I do with a dad now that I had one? Not much seemed to have changed, except there was ranch dressing in the fridge now. Nominally, my stepfather and I had some stuff in common–a tendency to rent terrible sci-fi movies from Blockbuster, for instance. Practically, there was an uncrossable gulf. It was handy to have a priesthood-holder on hand without having to call the home teachers for a blessing, I supposed. But why was he trying to talk to me about sex ed? My mom, and the school district, kind of, had already done that. I wasn’t convinced of his interest in me. It showed up in weird ways, like when I heard him tell my mother he thought I would make a good sister missionary. Even in eighth grade I knew that was code for “future spinster.”

When I was fifteen I found an old diary in a box of books. One of the entries from July 1997 detailed that my mother had gotten married and now my last name would be different. This was not an event that had transpired. I couldn’t remember why little me had thought it would, and I didn’t know why my mother hadn’t wanted it to. Other things I found that year included one of my father’s passports and his death certificate. I was shocked by how much I looked like him in that sepia passport photo, especially with my glasses on. I wondered whether it hurt my mom to look at me and see him looking back. I wasn’t sure how to feel about reading the word shotgun on the certificate. It was something I knew to be true, but seeing it written down didn’t make it more real. I didn’t feel sad–slightly ashamed, perhaps, as though I was looking at something private. I left the certificate where my older sister could find it. Later, when we lived together in college, she did the same with a bundle of letters our father had sent our mother when they were young and he was overseas. We never talked about him directly, a long and silent agreement. For me at least, that silence had been indifference when I was young, too young to understand death and loneliness. It had morphed into defensiveness laced with deference as I grew older, a desire to not hurt my mom. She was the default, always.

When I was seventeen my stepfather had the bright idea to move himself and my mother a very cold, small state 1,500 miles away from my hometown. This seemed un-dad-like and, worse, un-mom-like. As far as I had gleaned from books and TV, when a kid went to college Mom helped them pack and Dad got them a can of Mace and/or a tire repair kit. They had already done the college thing with my sister–a much higher-maintenance young woman–so I guess they figured all would be well for me. Maybe if I had managed the appropriate choice and gone to BYU; maybe if I hadn’t gone to a heathen state school and found Science. I helped them move. My graduation gift was to drive up with my mom and then shift boxes around between barn and sprawling New England house. I thought on this lengthy road-trip I might finally grind up the nerve to ask her about him, my father. I didn’t. We stayed overnight in Virginia and watched a documentary about Patty Hearst, we ate Cow Tails and I endured a lecture about wearing ear plugs to concerts because Deep Purple had ruined Mom’s hearing. All comfortingly normal. I flew home for a summer trip and then college, and felt a strange relief at the new distance. I could do my daughtering at arms’ length. There would be no more daily searches for the right words, the right actions, the right feelings.

Age nineteen: patriarchal religion forsaken. Age twenty-two: an email from my mother berating me for forgetting to send my stepfather a birthday card. Age twenty-seven: a polite, restrained visit from the parents to my new city, the second time my stepfather had accompanied my mother on a visit to me. Having to tell people your parents are visiting is such a loaded statement. Are you going to have fun? Are they cool parents? Years later the word parents still sounds funny coming out of my mouth, heavier than it ought to be and with a pause in front of it. I’m unsure of its propriety, its ability to convey the truth about these people: one threaded into me in every way significant, biological and formative and sympathetic though not always understanding, approving, or aware, and one an organ rejected by the body. And one more, visible in the set of my eyes and the smirk of my mouth, a file readable only by outdated software. 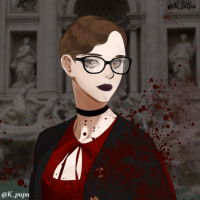