Sal and Crim have been having the same argument about noses since the day she got hers removed. Her parents took her to a cheap place. They went in through the side and Crim didn’t understand at the time, but she realizes now that they didn’t want anyone to see them going in. She wonders if her parents thought this cheap job would fool everyone when it’s so easy to look at someone’s face and tell the difference between an expensive, correctly done procedure and the hack job Crim endured. The sedative didn’t do much, so even though she was young, she remembers it clearly. She remembers a lady leaning over her and smiling. The lady smiled like she was happy with her work, like she was having a great time. Crim wonders what kind of person could be happy doing that to another person. The lady couldn’t have been well paid at a place like that, but maybe she was doing dozens and dozens of removals a day. Eventually things add up.

Crim tried to shut herself in her room that day after it was over, but Sal came over anyway and her parents, who like Sal very much, let him inside and pointed him up the stairs to her room. Even though her sedative had been cheap and inefficient, she was groggy. She remembers Sal standing over her. He was so high above her that he must have been standing on her bed. He unwrapped her bandages and touched the fresh scar. It hadn’t even stopped bleeding and he touched it. He said he couldn’t wait to touch it. This went on for what seemed like hours. Crim and Sal have been talking about her nose and other noses since then, so today’s discussion isn’t different than any other day’s.

I don’t know why you didn’t get rid of it sooner, Sal says.

It wasn’t quick or easy, she says. Not for me.

But now that it’s over, Sal says, it might as well have been. Either way it’s over. And your face looks proper now. Looks how it ought to look. You looked so uncomfortable before.

It’s not what I wanted, Crim says. It was comfortable before. It was natural.

I don’t know what you were so worried about, Sal says, or who you thought you were. Who wants to wait? People line up for it. Charities pay for it. Charities. Are you against feeding hungry people? Are you pro-homeless?

This goes on until Sal has to leave, because Sal’s always leaving mid-conversation. He’s always remembering something he has to do, something that can’t be easily explained to Crim, so he just leaves mid-discussion, mid-thought, sometimes mid-sentence. She’s used to it. It’s generally a happy surprise.

Crim goes down to the kitchen and asks her mother, do you even remember your nose?

Her mother doesn’t answer. She waves Crim away, without looking at her.

How long before you forgot? Crim asks. What’d it look like? Can you remember how it felt on your face? Was it heavy? Did you want to pull it off? Did it hurt you somehow to have it? Is that why you did it?

Crim touches her own face, tracing her fingers over the scarred skin where a nose used to be. The uneven scarring is a sign of her class, she knows, and no matter how many times she touches this scar, it doesn’t feel like it belongs to her. She can’t ever remember the shape of the scarring, can’t picture it. Every bulge feels unfamiliar and new. She wonders if the scar is growing or diminishing and if it’s going to keep changing forever so she’ll never memorize its contour. She hates to feel so far estranged from her face. A face ought to feel like something that belongs to her, she thinks. Her hands belong to her. Why not her face?

Her mother holds a newspaper, not reading it, and uses it to fan her oatmeal, though she likes her oatmeal very hot and says a good oat scalding cleans the mouth, the gums, between the teeth. Oats have ridges that relieve pressure. They scrape and burn off excess mouth skin. The hot oats also scorch off the used up parts of her taste buds. Fresh new taste buds are important.

It’s in bad taste, her mother says. What’s gone is gone. No reason to give it any thought. Crim’s mother is a woman of refined tastes. Every day she soaks her hands in the juice of ten lemons. Good for the skin, she says. Crim tries this just once, but it burns and she cries, jerking her hands out of the lemon juice. Her mother shakes her head. That’s because you bite your nails, her mother says. Your fingers are covered in tiny scabs and tears. Your cuticles are ripped to shreds. Of course it hurts. You shouldn’t put your hand in your mouth. No one wants to see you gnawing at your hand like you’re trying to eat it. It makes you look poor. Are you really so hungry?

But Crim thinks about her nose anyway. She is quiet and thinks about how it felt on her face, how it felt like hers, how her face feels empty and undefined now. She’s always surprised to see her reflection or a photo of herself. Who’s that stranger? she wonders. She doesn’t know how to express herself or how to say what she wants. She also can’t quite remember what she looked like with a nose and if she could she’d be remembering an earlier version of herself. She’d be remembering a differently sized self and a different set of features that have been changing over time. She wants to see her current self with a nose, not the eight-year-old version of herself. She hopes she has changed since then. Something must be changing, she thinks. She stretches her arms out, thinking about how her limbs have grown. Her torso has grown. Her neck has lengthened. Muscles have developed. Her body has new scars. Her shape is not the same.

But mother, Crim says. Her mother’s eyes are unfocused and gleaming. She can’t see Crim anymore, doesn’t care about seeing Crim. Crim wonders how long before she gets that hollowed out look too. How long before she becomes an iteration of her mother? Every day she is either becoming her mother or dying. Get busy dying, she thinks.

Crim can’t ask her father about his nose or any noses because she hasn’t seen him in weeks. Where’s dad? she asks.

But her mother doesn’t answer. Just waves the newspaper over her oatmeal. Steam rises and disperses.

I haven’t seen him in a long time, Crim says. She thinks about her father’s shape. He’s always been thin. His body is all angles and crevices. The look of her mother holding the newspaper over the table isn’t so different than the look of both her mother and father sitting at the table. Her father is that slight. Crim tries to remember. She tries to think of his face, but can conjure nothing. There is just her mother holding a newspaper over a steaming bowl of oatmeal.

The oatmeal steams the newspaper, ruffles it and Crim could swear it makes the ink appear wet on the paper, like it might begin to run and bleed through the grey paper. The ink might roll off and drop into her mother’s bowl of oatmeal, a swirl of black swimming across the oats. Crim wonders if this is the same oatmeal her mother’s been eating her entire life. She can hardly recall other foods, but she could swear she’s seen her mother eating them. It’s just that this oatmeal thing has been going on so long now that other things are murked inside her head.

Crim gets her own bowl and fills it with hot water. She pours oatmeal into the hot water and stirs, watching the little dregs of oat darken, watching them weaken as the liquid permeates them.

That’s not really enough to cook the oats, her mother says. These aren’t instant. You’ll have to cook them a bit. It’ll hurt your mouth more than you think.

Seems better with a crunch, Crim says, but she doesn’t eat the oats. She only sits across from her mother and stirs them, cups warm water in the spoon’s head and then drains the water slowly back into the bowl. Oats cling to the spoon and she stirs vigorously to knock them off. Crim sits there for hours and she doesn’t see her mother take even one bite of oatmeal, but still the bowl steams and still her mother waves the newspaper over the oats.

Crim is anxious, but she doesn’t want to get up, because she might miss the moment when her mother finally takes a bite. Or she might come back and find that her mother’s gone, disappeared. All that’s left behind might be the bowl of oats or maybe that will be gone too. Maybe there will just be the newspaper and that’ll dry to the table top, becoming a permanent part of the kitchen.

Crim tries again to think of her father’s body, but now all she can think of is Sal. Sal looms so large in her mind, standing so much taller than her and with great posture. She thinks of Sal squeezing a frog between his hands, not enough to kill it, but enough to make the frog at least mildly uncomfortable, so it’ll squirm and kick its legs in the air like that’s going to get it anywhere. Crim has to admire the frog for trying and she hopes a little that it’ll shift its body in such a way that Sal has to set it down. Then the frog will jump toward freedom and whatever kind of life frogs are meant to live.

Do you think Dad likes frogs? Crim asks her mother, but her mother just sits, fanning the oatmeal, waving its steam away from her and toward Crim.

Crim gives up and goes back to her room to wait for Sal, who will at least engage her in some variety of conversation, even if it is unpleasant. She closes her eyes and tries to remember the shape of her nostrils. Were they symmetrical? If they were asymmetrical, were there other instances of asymmetry on her face that were complimented by her nostrils? Since the removal of her nose has everything been thrown off balance? Will things turn out very differently now? Has she turned out very different?

She wonders all these things until Sal opens her bedroom door and closes it behind him. Sal looks the same as he’s always looked. It’s hard to even tell he’s grown, not since she first met him in grade school. His body has swelled slowly and perfectly, so every single part of him is always in proportion to all the others parts. She doesn’t know what he looked like with a nose, and because she’s only seen him noseless, his face looks correct without one. This Sal is the only Sal she ever knew. She tries not to wonder, but she can’t help but reach out and pick at the wrinkled skin around his wrist, hoping to find a loose bit, pull the whole thing apart and really make sense of him, really uncover him. Instead he pulls her close and pins her arms to her side. He lays a hand on her face and pushes her scar so she can feel it move.

You look good, he says. His arms stretch and his skin is taut enough that the wrinkles around his wrists disappear. 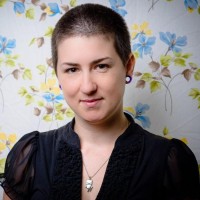