A Life in My Mother’s Clothes

First there were the jackets. A vintage Levi’s jacket that my mother still perceives as royal-hued denim, despite how it has faded. The leather label on the inside back, between the shoulder blades, having long since been blasted through, the brand is legible in the rivets down the front and at the cuffs, undisturbed after nearly forty years of wear. The cuffs themselves hang suspended by threads; unfolded, the denim is darker, preserved. My mom wore the sleeves cuffed to the elbow; I to mid-forearm.

A fawn-colored leather bomber, menswear, size extra-large. Purchased for her by my father at the Neiman Marcus in Dallas, where they lived after they were first married. My mother was a journalist; my father, a freelance copywriter. I wonder how he afforded the jacket; imagine him, with his untamed ’80s hair and Coke-bottle glasses, bringing the thing up to the register, handing a stack of bills to a richly suited man.

My father has a matter-of-fact-ness about the giving of expensive, unusual presents, evident especially on Christmas, in signed first-edition books for me and my brother, a Woolrich blanket for my mother. The wonder turns less around cost than around an appreciation of the particular accuracy of his gifts.

But he never cared for clothes. Occasions when I see him in anything but loose-fitting jeans and an oversized shirt, likely both bought in bulk from Lucky, our grocery store in Oakland, are rare. He wears his Timberland boots to the point where the ankle padding comes so detached as to form a spy-hole to his socks, and is fond of shouting at me from the front of our house, where he might be gardening, “Where are your practical shoes?” when I leave in my favorite black-heeled ankle boots.

The purchase of the Neiman Marcus bomber hinged on its practicality; to my father, it was an investment in warmth, protection against Dallas winds, and later, a shield from the cold in Chicago, where my brother and I would be born. But to my mother, and later to me, it is a statement piece, to be worn thrown over shoulders coated in structured knits, or atop vintage floral sundresses, a combination I leaned heavily upon in my first summer home after college. In those months, I added wear of my own, in the fraying of the right shoulder down to the lining, and the accumulation of modern movie ticket stubs in the front pocket to add to my mother’s (one, from a re-screening of A Man and a Woman in 1988, that I found the first time I wore the jacket, on a dark beach in San Francisco where we built a bonfire to celebrate the end of high school).

My mother values longevity. Her jackets passed to me by way of her stubbornness and a care for things she believed ought to be preserved. She bought polish and sealants for her winter boots; she preferred a to pay a cobbler than throw away a damaged pair of shoes. She did not hoard, but saved, out of an understanding that remembered things have more value than we realize when they are first acquired.

Her old magazine clippings—from Vogue, French Marie Claire—are folded in a ’70s Ralph Lauren catalog that is now in my possession. She passed it to me with journalistic unsentimentality, as a reference manual rather than the relic I saw. She had a fascination with a particular, American quality, and with companies that evoked a sturdiness of stitch and a wholesome, Lauren Hutton look to which, despite her own distinct beauty, she could never quite aspire.

Her father said of his own wife, my grandmother, whose name I share, that there was something too “ethnic” about her, something that precluded the very American beauty my mother exalted. When my grandparents were married in the ’30s, Chicago drew its borders on patterns of European immigration; while my grandfather had, by all accounts, previously dated only blondes, it was my very Irish-looking grandmother, with her black hair and wry smile, who eventually won him over. There have been times when I wondered if it was because, as all her knew her said, Eileen Collins had style.

She died when I was seven, but the photos I have of her show a woman who never preened but held herself with pride. Not even in her eighties was she afraid to make a statement; a snapshot of her at my third birthday shows her wearing a tuxedo-collared shirt with a Bolo tie, and looking gleeful to be doing so. If she felt inferior to the succession of blondes before her, it never showed. My grandfather was a tailor, of Irish descent himself and not without his quirks (later in his life, his ears flapped in the breeze created by car windows). But he dressed impeccably, and perhaps felt he met his match in my grandmother.

Eileen Collins had a way of navigating the Chicago department stores, a way she passed down to my mother. It was a method of shopping which, either through the mass production of clothing or the internet, has been made inaccessible to me. She advised my mother to befriend the staff of the larger stores: Bonwit Teller and Marshall Field’s in Chicago; I. Magnin in Oakland. When a piece came into the store that they thought was right for her, they would set it aside and call my mother to come try it on before bringing it out to the floor.

This method was not, in the case of either my mother or grandmother, made possible by great wealth. My grandparents, though not impoverished, were the children of immigrants, and never could have been called rich. As a journalist, my mother never had significant money either; a friend of hers once described her: “Mary O’Connell: eats popcorn for dinner, steps out in Calvin Klein.”

I recall a day as a twelve-year-old, when my mother and I were visiting her sisters in Chicago from our new home in Oakland. My aunts had taken us for a horse-and-buggy ride around the city and into Neiman Marcus, where one of my mother’s sisters grandly promised to gift my mother a pair of pointed, blackwatch-plaid Manolo Blahnik flats. When the shoes arrived in Oakland the next week, my mother quietly stowed them in the closet, both the label and the largesse of her sister embarrassing to her.

When I rediscovered them before my sophomore year of college, I wore them on my first reporting assignment, and they cut my feet so badly I walked home barefoot.

Her clothes — those pieces hand-selected to fit her sense of style that could never be purchased — those are the pieces I’m proud to be growing into. Their value was something I never recognized when I was younger. As with all girls whose adolescence was marked by overwhelming awkwardness, zits, braces, and a height that placed me more on the level of the boys who ignored me than the girls I wished to befriend, conformity was aspirational. When I asked my mother to take me to Abercrombie & Fitch for the insubstantial tank tops that were the marker of normalcy among the girls I knew, she consented, but would never let me buy more than one thing, from the sale section; she knew the purchases would not last, but also knew it would be years before I learned that myself.

Once I did, my interest in her old clothes surfaced. I’d inherited the jackets, but the other pieces, unmistakably of another era, had intimidated me. They were mostly made of linen and wool—pure materials, no polyester. Her preferences blended the sweaters and ankle-grazing skirts of Chariots of Fire with the menswear look of an Annie Hall-era Diane Keaton, and while I’d worn some items before, it was always for Halloween costumes or historical reenactment days in school.

But around the time I was eighteen, I described a top I was looking for to my mom—a cropped shell tank, in navy or black—and she said, “I think I have one.” She and I went up to the closet we share, where she hauled down the blue-and-white cardboard storage boxes from the top shelf. Inside were her linens, mixed in with the old basketball camp t-shirts I’d shoved in through holes in the sides of the boxes. She looked through the first box, then another, and finally pulled out the shirt. “Try it on,” she said.

I went into the bathroom and changed, the hem grazing the top of my pajama bottoms. She was leaning against the edge of my bed when I came out, and her face showed something like the delayed recognition that comes from catching your reflection in a new mirror. “That works,” she said. She left the boxes out for me to put back, saying she had to go to work, but I knew she left them as an offering.

I tried on everything. We hemmed some of her mid-calf skirts to mini or knee-length; she refused to make a cut in the fabric out of the belief that a longer hem would come back into fashion (she was right). I found a silk shirt that my mother had bought for my grandmother; she’d worn it when they took a road trip together through Colorado and Arizona when my mom was the age I am now. I packed her plaid Ralph Lauren duffel coat for my first winter in Philadelphia; when she told me she’d many more that had been misplaced by a dry cleaner’s in Chicago, I felt that her loss was mine, too.

Some pieces, like her excessively shoulder-padded blazers of the late ’80s, I can admire as artifacts only — though we share the same tall frame and slim build, she had a broadness of shoulder that I unfortunately lack. But others, ones that I had dismissed on my first pass through her wardrobe, I am beginning to make my own.

One afternoon last summer, before I moved to New York to begin my first job, she pulled out a garment still hanging in its original I. Magnin plastic. A charcoal grey jumpsuit, buttoned down the back to a fitted waist, flaring out into wide-legged pants. I remembered holding it up when I was younger, and feeling daunted. “I can’t,” I said. “I’ll look ridiculous.”

“Just try it,” she told me. I slipped it on; she helped me with the buttons. When I looked in the mirror, it was without embarrassment. It fitted my waist exactly, the pleats in the legs fell straight to the floor. It was a piece for generations, and in it I saw my grandmother. I saw my mother. I saw myself. 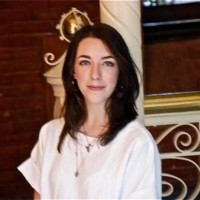 Eillie Anzilotti lives in Brooklyn and works at Glamour magazine. She grew up without a television, which might explain the rest.