Facing the Beast: On Anxiety and Sisterhood

Let me tell you about fear. It rises in you; it pulses like it is a part of you. It settles on your chest and clots in your lungs. It is the water scudding toward shore, tightening into an immense wave. The fear exists always in that moment right before it crashes into you; it is always rising up, ready to strike. Nothing will ever be right. The whole world roils with it.

For instance: You’re standing in the dining room, waiting in line. It always goes like this: oldest to youngest, Chelsea and Ben and Hannah and Steve and you. If you did anything wrong, you don’t remember it, but odds are you are innocent. You are a good child, always eager to please; your rebellion won’t come for many years.

You are innocent but in line to be spanked because your parents believe that when one child sins, the others are in error as well for not stopping him or her. Either that, or they can never figure out which one of you is to blame.

Your older siblings all go first; you try not to listen to the slap of the spanking stick. When it’s your turn, you’re already crying.

I was four or so, standing in the golden sunlight spilling from the window of our church onto the smooth hardwood floor. There were other kids around, playing, but I was wrapped in my aloneness. I felt it rising through me, bubbling up, churning in my stomach.

“My stomach hurts,” I would say, once or twice or three times a day. It was a complaint I’d made, in some form or another, since I was born. My mother even took me to the doctor when I was a few months old. “She cries all the time,” she told him. “I think she must be in incredible pain.” My mother wasn’t some naïve first-timer; I was her fifth child. Yet my crying went above and beyond what mothers expect of newborns. I cried when I was alone and when no one held me—for hours on end, she said, with an unrelenting urgency. I wouldn’t stop, like most babies eventually did.

The doctor examined me and sent me home. I was healthy as a horse. My mother grew desperate. “There must be something wrong with her!” she said, but the problem wasn’t physical—and so she told me, again and again.

But I knew what I felt was real.

In church, I ran not to my mother but to my sister. I remember how Chelsea’s long black hair felt against my cheek, the way it tangled up in my fingers. “Remember” is a strong word for it. It’s imprinted on me, like a ghost.

My sister was the one who calmed my stomach, who never mocked my constant anxiety. She protected me from our siblings’ teasing. She comforted me when other little girls shunned me for being a little funny, a little off. And she was the first one to stand up to our father.

Let me tell you about anger. You think it’s not going to take you over; you think you are in control; you say you’re better now. You justify it with reasons, and there are always plenty of excuses.

For instance: When your children misbehave, you must show them the error of their ways. Spare the rod, spoil the child. You’re just doing your job, that’s all. But this little girl of yours is crying, and when she looks at you, you see fear in her eyes, and the rage springs up anew. When you spank her, you try to convince yourself it’s the holy wrath of the Lord flowing through your arm, cleansing you both of all wrongdoing. She won’t stop crying, and so you double the punishment until she does.

After her penance is complete, you already feel the dizzy rush of regret. You hold her chin in your hand and demand forgiveness. You won’t let her go until she stutters out the words that will release you.

I was six when Chelsea ran away from home.

At 17, she was in the throes of Becoming. Becoming a woman, becoming a warrior, becoming someone you don’t fuck with. She chopped off her long dark hair and dyed it blonde. She would bring guys home, their tattered leather jackets wafting cigarette smoke, staying just long enough to rile my father. She didn’t have time to pull me onto her lap any more. The rebellion kept her busy.

One night, the always-simmering fight between Chelsea and our father erupted once more. You’re not too old to take over my knee, he said. She stormed out the door in the middle of the night, and she never said goodbye.

That feeling in my pit of my stomach—when I woke up and realized Chelsea was gone. I thought she would never leave me. She’d as much as promised. How could I survive without her?

I waited for her to come back; she had left before, staying at friends’ houses until her anger cooled or she lost her nerve. I was certain that she couldn’t leave, not for good, without saying goodbye to me.

But weeks slid into months, and I never heard from her. My longing turned to anger, then cool contempt. I didn’t need her. I was just fine without her. If she’d cared so much, she wouldn’t have left.

A year later, Chelsea was living with a man named Jesse in an efficiency apartment in Rehoboth. It was the first time I’d seen Chelsea since she’d left, and I felt shy around this strange woman I barely recognized. She smoked cigarettes in front of my mother and her bedroom was a mess and she was clearly living in extravagant sin with Jesse. I was entranced by this bold, confident woman—even though I could still detect the uncertainties beneath her actions, a slight trembling around my mother, the need to prove that she had turned out all right after all, hadn’t she? Hadn’t she?

My mother, whose childhood in southern California led to a lifelong obsession with the ocean, probably suggested it first. From Chelsea’s tiny apartment, we left for the beach, which was deserted at this time of night.

I have terrible vision, and it wasn’t corrected until years later. Toes spreading into the sand, I froze in fear at the roaring black ocean—an entity I could hear but not see. These swells were real; they were here to swallow me.

My sister saw me standing at the edge, and she waded back to take my hand. She pulled me forward until the water splashed against my thighs and her knees. I shook in fear every time a wave rose from the nothingness before me.

She turned us both around until we faced the shore. The pale sand glowed along the shoreline just a few feet away, and the kaleidoscope of lights winked and slid above the boardwalk beyond.

See? she asked. You can still see it. The ocean won’t take you away.

At first, my back to the angry behemoth behind me, I was even more scared than before. The first thing you learned growing up on our home was never to turn your back on danger. But my sister’s voice soothed me. Listen to the waves, she said. When you’re not looking at them, then you know they’re coming; when you don’t expect to see them, you focus instead on listening to them.

The waves rocked and pulled us gently. I gradually found the rhythm. I had never noticed how steady and constant the ocean was. I had always seen it as turbulent and unsteady, like a father’s anger.

Dig into the sand with your toes. See? It keeps you here in one spot.

The water came and went, sand shifting and eroding under our feet, but the two of us stood in the same spot, hands still clasped together, eyes fixed on an unmoving shore. 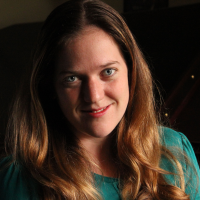