Reading Lines in Pictures: Why I Teach Visual Literacy

During a recent visit to the Frick Collection, my students were expressively irritated by the lack of wall text that could explain the works of art to them. However, when forced to consider William Turner’s Fishing Boats Entering Calais Harbor, they were able to understand the precarious situation of the boat and intuit the frustration of seeing the proximity of the harbor yet being on a boat unlikely to reach it. They noted the tiny figure on the boat pointing to the enormous swell of the sea and felt the ultimate powerlessness of man in the face of natural forces. Once engaged with the work, the students kept noticing details and elements in the painting, delighting in the tale told through paint. A particular student was later inspired to do some research on Turner and was excited to talk about the differences between the Frick image and Dutch Boats in a Gale currently in the National Gallery, London. She did not start with the historical context nor what others had written about the images, rather, she began with visual analysis.

While we are trained to read and consider the significance of the written word, we are often at a loss as to how to read a picture. Frequently, misunderstanding the tired trope of a picture being worth some large number of words, we glance at it, categorize it in relation to something verbal and move on. Of course, viewing images in a museum is not the same as, say, glancing at a photograph online. The lack of learned visual literacy, however, is at the foundation of misunderstanding both.

I often hear unexpected effects of studying art history on student lives: one of my Columbia University undergrads once noted that his relationship with his family had improved vastly once he learned to observe and respond to their body language in a manner he would interpret a painting, rather than in an emotionally charged way. A high school student told me that upon noting the arrangement of people’s living rooms during a recent visit to Romania, the objects her mom would never buy or allow in the house all of a sudden took on a different significance. Another student was excited to report all the ways in which advertisements failed to elicit their desired response and her shock at the ludicrous imagery employed to get people to buy stuff. An awareness of our visual world and the ability to interpret images makes us active agents in an environment that constantly assaults us with visual stimuli.

2. I was hungry then ate a sandwich.

3. I wanted to watch a movie, but my TV was broken.

It is beyond obvious for us to associate the inaction of number 1 with a, the improvement in our emotional well being with b, and the disappointment of 3 with c. We read from left to right, and that’s the direction in which we read lines and images.

Yet a diagonal does not simply imply change in this artificial exercise or provide access to a line graph of stock prices. Directionalities of lines carry universal meanings that we internalize. Look around the space you currently occupy. If you’re indoors, I bet you don’t see many diagonals, but rather a room dominated by verticals and horizontals; some that you’ve never previously observed. All are there to increase your sense of stability and lack of motion. We would feel great discomfort in a room where the molding ran on a diagonal, and we are irritated by pictures that don’t hang perfectly parallel to the floor. We know the desirability of repeating diagonals on a heart monitor and the unchangeable certainty of a flat line. But the recognition of these elements alone does not allow us awareness to control and understand them.

Children with iPads or in front of televisions approach visual content similarly whether they’re engaged with games, movies, or advertisements. Images manipulate their viewing experience in the same manner that sentences convey meaning. We are taught to understand the meaning of the written word, but there is no organized program for visual literacy, of providing tools for the understanding that images carry meaning and are not simply supplements to the literary. Images allow us to bring to their viewing our beliefs, political ideologies and historical assumptions. Yet, as a primary document, an image generates ideas, thoughts, and awareness in a way that is not subservient to text. One cannot glance at a text and read its meaning, nor can one responsibly do this with images. The knowledge of how to read an image empowers us to understand a world in which advertisements, films, pictures, photographs, etc. are ubiquitous. And this knowledge needs to be learned.

One might argue that we look at images (especially those online) too quickly to be able to intelligently read them. However, all images send signals that manipulate our pre-linguistic thoughts (ask anyone in advertising about this), and being visually literate allows us to raise those signals from the subconscious to the conscious. Thus, we are able to understand how the image is working on us, and also decide whether it deserves further consideration before we decide to buy into its propositions.

Take for example an image that thousands of people flock to visit daily: a metope from the Parthenon, a sculpture currently housed in the British Museum as part of the so-called Elgin Marbles collection:

What is happening in the image? If you, like millions of previous viewers take a quick glance, you’ll probably note that there are two figures in conflict, a centaur  victorious over a suffering human. Perhaps the centaur once held a sword and he now prepares to swing his body around and decapitate our poor ideal male nude soldier. What a weird thing to put on the Parthenon, a building that’s built using the money from the Delian league and one that all Athenians literally look up to and feel themselves as heroes. How can this hybrid half-human half-horse beast be victorious over this young hero?  And so we’re rewarded through closer looking. We might note all the diagonal lines in the image and realize that this is a moment of change. We will see the strain in the back leg of the human and the flexing of all his muscles. His strained facial expression takes on a new meaning when we note the large stone that the man clutches in his left hand. This is a moment of change. Our young hero is about to spring up on his left leg and smash the boulder into the side of the centaur’s body – a body that is currently destabilized, using only two of its four legs for support. This is an image with a clear political message to the Athenians, and one that rewards careful looking.

Recently, upon visiting the New York Times website, my gaze immediately fell on a picture in the middle of the page, a brilliant photograph by Stephen Morton. The first in a series of seven, this image ostensibly accompanies Richard Fausset’s article “In Stately Old Charleston, the New Buildings on the Block Are Struggling to Fit In” a text seemingly concerned with the architectural difficulties of designing new structures for an old city. The picture is ostensibly of a Charleston street, which houses a number of buildings that are in the process of being demolished for a new construction. It is a sunny, bright day, a red crane is silhouetted against the clear blue sky, and a construction worker looks into the left distance while a cyclist drives by in the opposite direction. Examined carefully however, the image does much more than provide a simple illustration about the difficulty of building in Charleston.

With our simple lines exercise in mind, we might realize that the photograph of North King Street is an image defined by verticals and diagonals: the solid verticals of the stone structures are contrasted by the diagonal of the red crane, which heralds the inevitability of their destruction. This diagonal is echoed and reinforced by the shovel in the workers hand: a literal instrument of change The vertical lines of the buildings are repeated by the construction worker himself, a contradiction that we must resolve, oscillating between the permanence of structures and their demise. The stability of the construction worker who looks to our left is contrasted by the diagonal of the back of the figure bicycling through deep shadow. Even the tilt of his cap is in contrast to the horizontal visor of the worker. The inevitability of new construction is balanced by the displacement of something else. The bicyclist rides toward the boundary of the image, moving to exit the composition entirely.

Thus, we come to a crucial point of difference. Ostensibly an image of buildings anticipating destruction, the story told by the picture is a human one. The stable figure of the light skinned construction worker in bright clothing, and with the instrument of change in his hand is a stark contrast to the entirely black silhouette at the foreground. This figure appears almost as a two-dimensional cutout that is being propelled outside our realm of vision, a blip that covers the advertised photo of the planned future development. The article raises questions about the difficulty of drawing the lines between old and new, of replacing the buildings “built with money from the trade of indigo, rice and slaves,” and the complexity of creating a new visual landscape in a city experiencing “one of the most transformative regional population booms since the Civil War.” But before we can read between the lines, it is crucial to learn how to read the lines themselves. 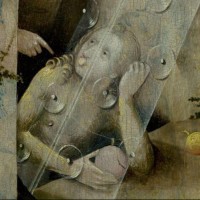 Anna Ratner Hetherington is an art historian who teaches college and high school students right from wrong. She also dreams of introducing a visual literacy curriculum in all schools.