The First Meeting of the People of Unintentional Color Support Group: Flash Fiction

The tin of butter cookies was graciously received, as was the punch bowl of lemonade—refreshments that wouldn’t tint the tongue, or the hands. The church basement was warm, not the dank dungeon some had feared, and was plastered with kids’ coloring sheets of lambs and foot-washing. Some members were heartened to see one picture of Jesus’ calves and ankles filled in with Vivid Tangerine crayon.

The meeting was called to order by a PoUC ally, a nearly albino man whose brother had turned green from spirulina supplements; he wanted to help others who had to endure the stares, the taunts that come with unexpected skin. But the circle of chairs was divided like a two-toned color wheel—all the people stained periwinkle from too much colloidal silver on one side, all the people tinged orange from too many carrots on the other. One man with dark brown skin, his eyes yellow as egg yolk, sat alone, an empty chair to either side of him.

One of the blueies, a bald man who looked like an Oscar statuette come to life—if Oscar statuettes were pewter instead of gold and wore aggressively ironed khakis—leaned toward the man with yellow eyes and said “You don’t belong here, pal.”

“Yeah,” said one of the orangies, a woman whose turquoise shirt made her skin glow like a crossing guard’s vest.

The man pointed to his eyes. “I’m here for my eyes,” he said. “My eyes are supposed to be white.”

“It’s not the same thing.” Another blueie patted his shirt pocket, where his tincture bottle of silver rested, the bottle he used to treat ringworm and burns and flu and his wife’s yeast infections. “Our color comes from healthy practices.”

“Vitamin A,” nodded one of the orangies. Her whole body looked like a nicotine stain.

“Jaundice is from liver damage,” the pocket-packing blueie continued. “Liver damage is from indulgence.”

A blue woman started to say, “Not always,” but one of the orange women shot her a look that shut her down.

The man with yellow eyes crossed his arms—one so scarred with pink lines, it looked like a Barbie-brand road map—over his broad chest. “I had an accident,” he said through gritted teeth. “I had a blood transfusion.”

“Your being here is the accident, buddy,” said Mr. Oscar. “Sorry, but it’s true.”

The man with yellow eyes slammed his hand on the snack table. Cookies jumped from their tin; lemonade sloshed from its bowl. The drink continued to sway inside the cut glass long after the man stormed from the room. It made the tobacco-tinted orangie sea sick; she had to close her white, white eyes.

“Let’s come back to order,” the leader said, uneasy. But there was too much chatter for order now. People rose from their red plastic chairs, crushing dry cookies beneath their shoes as they moved toward one another. Mineral mingled with taproot, carotene with colloid, the air alive between them. Only the one blue woman picked up her purse and left without talking to anyone. Maybe this is what they needed all along, thought the leader—to band against a common foe. He wished his brother could be here. His brother never left the house now. He wilted in a different basement across town.

After the meeting disbanded, Mr. Oscar went home with Ms. Turquoise Shirt. Someone once told her everyone’s skin is the same when the lights are off, but she could swear his skin felt cool, like metal, in the dark. Under his fingertips, her skin blazed like a thousand suns. 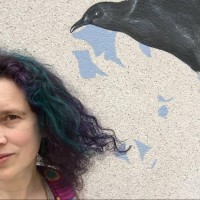 Gayle Brandeis is the author of Fruitflesh: Seeds of Inspiration for Women Who Write (HarperOne), Dictionary Poems (Pudding House Publications), and the novels The Book of Dead Birds (HarperCollins), which won Barbara Kingsolver’s Bellwether Prize for Fiction of Social Engagement, Self Storage (Ballantine), Delta Girls (Ballantine), and My Life with the Lincolns (Henry Holt Books for Young Readers), which received a Silver Nautilus Book Award and was chosen as a state-wide read in Wisconsin. Gayle served as Inlandia Literary Laureate from 2012-2014. She teaches in the low-residency MFA program at Antioch University, Los Angeles, and is currently Distinguished Visiting Professor and Writer in Residence at Sierra Nevada College.