I see someone every once in a while that I would say qualifies as a therapist. I actually call her my guidance counselor because I started seeing her to help me shed stubborn layers of immaturity. About a month ago my guidance counselor told me that I was naïve. She said that I give people credit for being a lot more conscious and introspective than they actually are. She said it was naïve that I didn’t think I was naïve. I found this fascinating, so fascinating, in fact, that I thought it was possibly not true.

Last week I visited my parents in Florida. They had a cocktail party every night I was here. I like cocktail parties, but I was taking this week off from drinking, so they were less fun than usual, but still all right.

Drunk or sober, you can learn a lot at a cocktail party. I learned that Kalamazoo is halfway between Chicago and Detroit. I learned that the president of Rwanda is uptight. I learned that the amount of snow that Hartford received this year was no fun for the average Newfoundland to go out and poop in. But the most amazing thing I learned was that a friend of my parents had a bookie.

Sam is from central New Jersey, and he’s had the same bookie for 35 years. Everyone was surprised. Understand these are people – well, not Sam so much, but everyone else- who say things like “Well, I think Obama is a wonderful president,” and ride around on bicycles with bells on them.

It didn’t seem right that with what little I knew about basketball – three pointer, travel, foul, time out, Phil Jackson, the end! – I’d just be permitted to place a bet. As this pretty dumb thought registered – imagine a bookie being like “I don’t take bets from people who don’t understand sports enough”-  I wondered: was this what she meant about my being naïve?

“Gonzaga?” I said that night, as I read the sports section. “That’s amazing! A deaf basketball deam!”

My father looked at me darkly. He did not approve of wagers. “I think you’re thinking of Gallaudet,” he said.

In the morning I went over to Sam and his wife Celeste’s condo and we went over the point spreads for that day’s four games. I bet on two of them, just $20 each. In the first game, I would win if UCLA won but also if they lost by 8 or less. I picked UCLA partly because I used to live in LA, but mostly because it just didn’t seem right that anyone would be good enough to make it to this big giant important college basketball championship and lose by that much! In order for me to win the second, Louisville had to beat North Carolina by 4. I picked Louisville because I’ve never been to Kentucky and it seemed like a nice gesture.

The UCLA game was awful, kind of like watching a couple of clowns armed with brooms battle the Vikings. During it I looked up scores of games earlier in the week and discovered some important information – plenty of teams in this tournament had lost by lots and lots of points to other teams!

The Louisville-North Carolina game, running fifteen minutes ahead of this one so that you could switch back and forth, was tight for a while. I was very much enjoying this new and surreal experience of watching the game not as a matter of winners and losers so much as sheer numbers. Like if Louisville was only three points ahead, they were dead to me. It felt soulless in a wonderful way, like I had struck such a fair bargain with big college sports. Previously it was a little too slick for me to care about, but if you cheapened it a little, with money, it went down so easy. When Louisville finally and fairly permanently pulled ahead I extremely relieved that I had only lost a grand total of only $4, and would therefore be able to have this much fun tomorrow.

In the morning Sam and I went over the games, because hey, that’s what I did every day now, I talked with buddy about sports before we placed bets with our bookie. The first game was Arizona and Wisconsin, with Arizona favored by two, and the next was Kentucky and Notre Dame, with undefeated Kentucky favored to beat Notre Dame by 11 points. I went with Arizona, because my brother’s wife brother went there. “Don’t bet with your heart,” Sam said, and I said I wasn’t betting with my heart, I was betting with a mild association. Celeste rolled her eyes again and brought me some water, which I drank while I considered Kentucky and Notre Dame. Even though there was ample evidence that teams could lose by 11 points and more, I was like “Notre Dame is famous for sports! They will not stand for being trounced!” So I went with Notre Dame, as much as one could go with anyone in this business, since I fully expected them to lose and would not care when they did.

That night my parents and I were going out to dinner with some friends of theirs, and on our way there it occurred that I could be like “Oh I need to go check on my game,” and just leave the table whenever I felt like it. My whole life I had seen guys in restaurants going back and forth from the bar to their tables, and now, I understood. Betting was a great trick for doing whatever you wanted.

But the restaurant we went to had no TV, so I had to just sit there all night, like a non-betting civilian. My father played college ball (Division III) and at dinner we talked about how Division I college basketball players often don’t graduate and often don’t get much of an education. My parents and their friends, all in their late 70s, were appalled by this. They wanted to know what I thought. The truth was that I felt bad for them that they cared about this. I said it was too bad that so many great basketball players didn’t do their homework but if I were really great at basketball I wouldn’t do my homework either. I said that betting on games was like putting really good frosting on a store bought cake that you’re going to eat anyway because you love sugar. “I swear to God you’ll stop being upset about all that stuff about college basketball if you just start betting on it,” I told them. My father looked at me like he wished I die and come back as an Aaron Sorkin pilot, but I tried not to take it personally.

As we left the restaurant I found out that Wisconsin had won by seven. “Goddammit,” I said, and my parents laughed. The shadow side of their Puritan disapproval of betting  was that they thought this was so cute. “Sarah’s really into betting on the games” they told everyone, like I’d been doing it forever, and everyone smiled at me, and I smiled back, feeling like a deceitful, uncool zoo animal. I was fully aware I was like this sort of preppy not very sports fan-like person who was just dabbling and I wanted to just be able to do this thing for fun and not have people pay attention to it. And yet much of the enjoyment of betting was this feeling of saying to myself “I am betting on sports” and so on and imagining Ray Liotta playing me in a biopic, so, like with everything, you couldn’t have it both ways.

Luckily I was right about Notre Dame and what was essentially a bet on the promise of their brand. Oh how the Fighting Irish fought! They actually played better than Kentucky. In the end they didn’t win, but they only lost by 2, so I won. I knew they were probably bummed – if they only knew how happy they had made me.

The next day was Michigan State vs. Louisville, with Michigan State favored to win by 2 and Gonzaga vs. Duke, with Duke favored to win by 2.5, which meant that anyone betting on them would have to win by three. I talked it over with Sam, we smoked cigars and stripper/waitresses brought us fried jalapenos – ha! No. That didn’t happen. But we did talk. The gist of our conversation, more interesting on Sam’s side than mine, was that Michigan State was really good, but Louisville was pretty good too. Sam told me that Louisville had lost one of their best players earlier in the season because of a rape scandal, and we agreed that they had come back strong, or he said they had and I nodded sagely. The reasons for my picks remained stubbornly simple-minded. I decided to go with Louisville because they won the last time I saw them play. And I went with Gonzaga because, well, they were really good at basketball, and I think I also felt a little bit bad for having never heard of them until two days ago.

Michigan State and Louisville switched leads many many times. And in the end it came down to Mangkok Mathiang on the free throw line – I marveled that just three days ago I had no idea who he was and now he was like an old friend – with just a few seconds left, and the score at 65-64, Michigan State. And he got the first one to tie, but he missed the next one. It was going into overtime, but I knew. I just knew. Michigan State was just better than Louisville and Louisville had kept them at bay for regular playing time but no way were they going to keep it up in OT. I spent the rest of the game taking a shower. Louisville hardly scored in overtime and everything ended with Michigan State winning 76-70.

I had finally lost. I owed Sam’s bookie $48. But I got it now. I really was just as naïve as my guidance counselor said. It kept being wrong that teams couldn’t lose by so many points because how could a great basketball team lose by so many points to another great basketball team? and yet I kept thinking that this reasoning was an intelligent way to place bets, and even in the midst of this discovery, I did it again. I did! On Saturday, I called Sam, and bet that Michigan State would either beat Duke or not lose to them by more than five, because how could they come this far and lose by that many points? And then when Duke absolutely slaughtered Michigan State I was actually shouting “No, no, no!” and at this moment, I really saw the parallels to life. I could get more complicated about all of this, I suppose, but here it was: proof that I very often could not see what was right in front of my face and even if I did see it I didn’t really see it. But that’s not important. The important thing is that I bet Wisconsin would beat Kentucky because Kentucky had to lose eventually – now there is some sound reasoning and it must be true because Wisconsin did win.

I don’t know who I’m going with Monday. But I do know I’ll never watch another sports event unless I’ve got action on it. To paraphrase Drake, it is indeed hard to make a song about something other than the money. 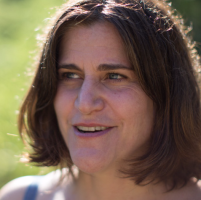