Last night my friend Mary masturbated in the church sanctuary where all of us girls were supposed to be sleeping. I think I am the only one who heard the crinkle of her Barbie-brand sleeping bag and the squelch of her fingers, kneading between her legs. Later, after I thought she was finished, she started moaning loudly. I think everyone heard, but when I rolled over to her sleeping bag, she was asleep. I clutched my study Bible to my chest for the remainder of the night, her sexual dreams seeping around me like ooze. As I lay awake, I considered the possibility that there was some sort of other explanation for what I had heard. Her scream, for example, might have been a wild dream of bareback riding at her family’s vacation home in the Black Hills; the wet rhythmic sound might have been the nighttime smacking of her juicy, perfectly moisturized lips. All things have answers. This is what God tells us.

Mary is my next-door neighbor. A boy named John who is older and has a girlfriend lives next-door to her, and after John is Ms. Radcliffe, who teaches some of us neighborhood kids how to play the piano and is known to be a lesbian. We all take piano lessons from her: Mary and John and I. John is the only boy in the entire neighborhood who takes lessons from her. Once I had a dream of standing naked in front of John, of taking off my clothes, item by item, and standing there naked and saying the words: what do you think of me now, you boy? It is wrong that I had this dream because John has a girlfriend. It is also wrong that Ms. Radcliffe is a lesbian, but I don’t mind because I am not one of those Christians. But I think about it all of the time, John’s fingers and Ms. Radcliffe’s fingers and all of those other sensual fingers mashing and penetrating all of those vaginas all over our neighborhood. Fingers forming chords on that piano we all take lessons on—all of my sexually experienced neighbors confidently fingering chords on Ms. Radcliffe’s grand piano—playing beautifully. And they turn to look at me while I sit off to the side, while I wait for my lesson. They smile at me, as if they know something about me, something juicy, something I have tried to conceal. 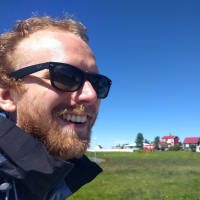 Kaj Tanaka’s fiction has recently appeared in Juked, PANK, and Knee-Jerk. His story “Dolly Parton” was one of Wigleaf’s top 50 (very) short fictions of 2014. Kaj is the nonfiction editor for BULL.