Tocolytic: On Pregnancy, Premature Birth, and the Female Body

In the hospital, they give me what one of the nurses calls “flu in a bag.”

The description fits. Magnesium sulfate, or mag, truly makes me feel awful. I’m seasick, and I can’t eat solid food, and my hospital room has no window, and my baby might be in danger.

They give me the mag to stop my 14-week-early contractions, which it does, but they can’t keep me on it for more than a couple of days. The side effects are too harrowing.

It’s okay, apparently, to force flu-like symptoms on a pregnant woman, as long as you don’t do it for too long.

Mag is not approved by the FDA to prevent premature birth. None of the medicines my doctors prescribe or hospital bed rest, which they put me on for good measure, is proven to prevent premature birth. Everything works a little, or maybe it’s all a big placebo effect. But nothing works for long, and after a night when I am wracked with pain, it turns out I have been contracting, and the baby is coming so soon my husband will not make it to the hospital around the Capital Beltway during the morning rush.

At 28 weeks pregnant, I have not yet attended birthing classes. (The class descriptions tell you not to sign up too soon, so you won’t forget what you learned.) During my labor, one of the nurses gets frustrated because I am freaking out—“Stop screaming and breathe!” she says—but another nurse takes over and tells me what to do.

Later I will think it was better my husband wasn’t with me. He would not want to see me that way—panicked, contorted, pain-wracked, a mess.

When he arrives in the delivery room—where I’ve been staying for several days because the doctors were afraid this would happen—the room is quiet and clean and I am lying calmly. The baby, who has no name because we haven’t decided on one yet, has been whisked away to the NICU.

This is the way it will be for two months, until he comes home. We have a baby. But we also don’t have a baby.

Even now, I hate pregnant women. When I was pregnant (there would be a second pregnancy and a second premature birth), I kind of sort of hated myself.

I see a pregnant woman’s belly and I project on it an ease, an idyll that probably doesn’t exist for anyone, anywhere. That pregnant lady has what it was hard for me to get and hard for me to keep. She has the ultimate female body and identity in the eyes of this society (many societies). Beautiful glowing, growing mother-to-be.

I want what I imagine she has, but I also reject it, the way my body, in a certain insensitive way of viewing things, rejected pregnancy.

I don’t like to talk about pregnancy. What is there to talk about? I don’t like to ask about due dates – I never got closer to mine than seven weeks. I don’t want to hear about morning sickness, which may actually be a protective factor against miscarriage, a sign of a healthy pregnancy. I don’t want to risk scaring anyone with my tales of mag and bed rest and emergency births and babies in incubators.

I don’t want to hear a woman nearing her due date say she is just so “ready for this baby to be out of me.”

I don’t like to talk about what it took to get pregnant. Conception, when I add up the waiting for both pregnancies, was forty months of rejection. If I tell you that the first time, I finally got pregnant without intervention after three failed intrauterine inseminations, you may think how wonderful it was that I got pregnant “naturally.” It will mean something about my husband and I, something positive, that we were able to conceive “on our own” after all our struggles.

If I tell you about the IUIs, the shots, the blood draws, the bazillion fertility clinic appointments, scheduled as early in the morning as possible so no one at work would notice, and I leave out the phone calls from nurses to tell us things had not worked out that month—you may think that things always turn out okay, thank God for modern medicine.

If I leave it all out, the whole saga, you may think I got pregnant just like that.

A gay male acquaintance once told me he and his partner wanted children. Whether through adoption or an egg donor, it was going to be hard, he implied. Whereas for straight people, he said, all it took was a bottle of wine and some candles.

People just don’t know, I thought. “It’s not easy for everyone,” I said.

But it’s supposed to be—that’s what people think. They assume female bodies are made to get pregnant, made to breed. People talk about the moment or the night or place they conceived a child, the song they were making love to, as though conception were instantaneous, as though fertilization were not a process.

And if the female body fails to get pregnant easily—or fails to stay pregnant—the body’s owner may feel shame. She may feel her body doesn’t know its function in the world. She may envy every body that seems to function according to plan.

I believe, a little bit, in the evil eye, or rather in ’ayn al-hasud—the eye of the envious. It can happen unintentionally. You look at somebody’s possession: her beautiful house, her beautiful child, her pregnant belly. And you envy it. You covet it, and you forget to invoke God’s name to ward off evil (the Islamic custom of saying Ma sha’ Allah).

Through your envy, you take the thing away from her. The house is foreclosed. The child gets sick. The pregnancy fails.

When I was trying to get pregnant, I became kind of sort of convinced that maybe someone, unaware of what she was doing, put the eye on me and that was why I couldn’t get pregnant.

About infertility and the possibility of never having a child, I felt dejected, pessimistic, isolated, devoid of hope, inconsolable. But I readily and without anger accepted the idea that I had been “cursed” by envy. I accepted it even though I knew it wasn’t true. It was just easier to blame the eye than to blame my own body.

When I leave the hospital after my son’s birth, he stays behind. My house seems empty: no bassinet in our room, no baby in the bassinet. No diaper changing and breastfeeding and rocking and comforting and bouncing till our knees ache. In our e-mail birth announcement, my husband and I leave out the sentence everyone always includes: “Mom and baby are home and doing fine.”

At night, I wake up every three hours to pump breast milk and listen to the lonesome call of freight trains from several miles away.

In the NICU, my husband and I can only hold our son when the nurses let us. At first, he’s so small and fragile he can only be held once a day, so we have to take turns holding him, trying not to tangle his tubes and wires.

I’m stressed out, eating chocolate instead of regular food. Seeing me eat a truffle, my sister-in-law tells me to avoid caffeine because I’m breastfeeding, and I am not pleased at the advice. People, even NICU nurses who should perhaps know better, comment on my appearance. You don’t look like you just had a baby, they say.

I am meant to take as a compliment the perception that my body is not the body of a mother.

We’re expected to want an unmotherly body once pregnancy ends. To drop the baby weight, like Kim Kardashian or Halle Berry, to leave the mark of pregnancy behind once we have a baby in our arms to prove our motherhood.

But I don’t have the baby in my arms. And I don’t want the compliment.

One day, I see a woman in the produce section of my grocery store pushing a cart with an infant carrier in it. She is wearing baggy clothes and walking a little bit slowly; she is, I am sure, a very new mom with her newborn.

I think about following her. I want to know what it’s like to be her. A mother recognized, acknowledged.

I will have to wait. It is not yet my time. 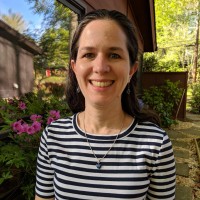 Eman Quotah is a government contractor by day and a fiction writer by night. Her writing has appeared in The Washington Post, Pindeldyboz, Gargoyle, and Amazing Graces: Yet Another Collection of Fiction by Washington Area Women (Paycock Press) and is forthcoming in Ms. Aligned: Women Writing About Men. She lives in Rockville, Maryland, with her husband and their two former preemies, who are now 7 and 3.