Karl Ove Knausgaard Reviews Everything Else In America

Karl Ove Knausgaard is a Norwegian writer who recently traveled the United States and chronicled his experiences for The New York Times Magazine in a series called “My Saga.” Collected here are excerpts redacted from the final series to make word count and, as one editor proposed, avoid “excessive existentialism.”

“Photographs and description failed to prepare me for the canyon’s unimpeachable vastness. In person, it was huge. Ineffably huge. Too huge. Who needs a canyon that big? I found it not grand, but disgusting, nauseating even. I stood at the edge and smoked a cigarette to show that I, like the Colorado River, could destroy something beautiful over time.”

“A horror. An unbridled horror. All of it, even the tummy pouches, or as they are known here, ‘fanny packs,’ made from tacky synthetic material instead of the warm, supple leather of the hinterlands. No matter where I turned, I could not avoid the tiny, howling faces, crusted with debris from ice cream bars, bars shaped like the head of Mickey Mouse, treats that encouraged children to consume their beloved. And the lines. Bypassable only to those with a Fast Pass, a microcosm of capitalism presented in a state of ostentatious nudity. The only reprieve from the imperative to BUY, DO, CONSUME is the gut-churning velocity of a spinning teacup or a plummeting elevator. I felt furious at myself for siring offspring of my own, creating the chance that they, someday, would come to this place and perpetuate its hideous glory.

I loved every moment.”

“The brutal overhead lighting in the McDonald’s lit up our faces as if to dare us to look at our true selves, examine our motives. What forces conspired for us, this motley diaspora of hunger, to converge upon the mecca of hamburger efficiency? There were the old men whose very presence seemed to defy the caloric reality of the food in front of them. There were mothers encircled by their swiftly orbiting children, yet to be slowed down by the gravity of French fries. One man, a homeless, was arguing with a cashier over his right to use the restroom.

‘Customers only,’ sighed the cashier.

‘I am a customer,’ retorted the street man. ‘I ate here last week.’

It made me consider…if one is once a customer, who has the authority to strip that identity away? A man in a name tag? Time itself?

Even the name ‘Big Mac’ insulted me. Big? Was this sarcasm, or just gross American hyperbole? As I bit into it, the gritty sesame seeds of the bun pried open my taste buds for the onslaught to come. Some flavors I recognized. Pickles. Onions. Limp iceberg lettuce, days past its prime. Other tastes were foreign to me. The special sauce was like a cartoon, a mockery of seasoning. The patties themselves bore no resemblance to the flesh of any animal I’d ever tasted. I wept tears for the noble bovine whose muscle had been reconstituted in such an unrecognizable form.

When I had finished my meal, I lit a cigarette and took one puff.

‘No smoking,’ said the cashier. Her rebuke felt unjust, for what I’d just experienced was as foul and carnal as sex itself.”

“As I grew nearer to the looming quartet of stone faces, I felt a hot flush of humiliation because I could not name them all. Washington was up there; I was sure of it. And Lincoln. I recognized the beard of the great emancipator. But who were the other two? My hands grew clammy with anxiety as I wracked my brain. Spielberg? Appleseed? Without the context of years of ingrained history lessons, the stern and distant men in the mountainside may as well have been my own father, a man who even when he sat beside me in front of a crackling fireplace, seemed as chilly and remote as a big spooky rock person in South Dakota. Was I destined to be that kind of patriarch, a scary, four-headed mountainside? I did not know. I stared at the four faces, George Washington, Abraham Lincoln, Martin Sheen, and Hulk Hogan, I am almost sure. As I looked off into the distance, I smoked, like a big strong grownup.”

“There was something mocking about the way the young people applauded for Steely Dan. Their vigorous clapping belied sinister smirks and dead eyes. I hated them for it. Couldn’t these children see that their drugs were dulling, not enhancing Donald Fagen’s meticulously pitched vocals?

I bummed a clove from a woman wearing some kind of tapestry, lit it, and stubbed it out violently on the side of a trash barrel.”

“At first I resisted the seductive pull of the service. Free, two-day shipping obliterates man’s natural state of wanting, of lacking. We forge our true character in the long hours between moments of pleasure. But the allure proved too great. I placed order after order, digital shopping cart filled to what would have been the girders of a physical market. DVDs, tank tops, curtain roads, tampons. I spent a month’s salary on these trinkets.

But as I clicked ‘Confirm Order,’ I felt ill. I crawled to the bathroom and vomited twice, with unimaginable force. I lay on my side and smoked a cigarette on the cool, dry floor, the ashes forming an anthill on the tile below.”

“Springsteen has always confounded me. He is called The Boss but claims to champion the working class. He always seems to be leaving his home, but he never acknowledges that to exit a place time and time again one must return to it in the interim. Have you never considered that, Mister Smart Blue Jeans? I am told I must love him, and yet I do not understand him. In that sense, listening to Bruce Springsteen also reminds me of being a father.

In my opinion, the only honest element of the song was the saxophone solo. It was long, and seemed to always be fading away. Each note sagged with the exhaustion of a man who does not know where his country is. In many ways, I believe that I am that saxophone solo.

I bit my lip, too overcome with sadness even to smoke.” 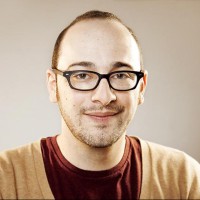 Josh Gondelman is a writer and comedian who incubated in Boston before moving to New York City. He is currently a writer for Last Week Tonight with John Oliver on HBO, and he is the co-author of the forthcoming book You Blew It, which will be released in September of 2015 by Plume.