Haw Par Villa: where your soul can never leave though your feet may go on the way

Stephanie Lai’s previous work for The Toast can be found here.

In 1926, Aw Boon Haw and Aw Boon Par migrate to Singapore from Yangon. In 1937, annoyed by Kids These Days, they open Tiger Balm Gardens, a site from which they plan to teach Singaporeans about traditional Chinese values. Their company, the Haw Par Corporation, produces Tiger Balm.

In 1988, Tiger Balm Gardens is renamed Haw Par Dragon Villa, despite the lack of dragons, tigers and leopards. Over ten years, the park loses S$31.5 million, due in part to high entrance fees discouraging Singaporeans. Free entry commences in 1998.

In 2001, the park is renamed Tiger Balm Gardens.

The park is haunted. I know it from the moment my mother declares our imminent visit, when my cousin leans over to tell me. I don’t doubt him.

I know it from the moment I arrive, when I watch the snake looming over the entrance.

I know it now, two decades and thousands of kilometres later. There are books dedicated to its hauntings, websites and message boards and strangers on the street.

The park is haunted. You know that.

It’s her thesis, and I don’t question it. But my Christian afterlife involves uncountable levels of hell, and towering Chinese kings; my everyday life involves taking revenge because retribution is allowed. It’s a part of my religion, whichever one that is. To call it brutal, to call it a deviation, creates a space where my religion is unacceptable by those I consider my peers.

We don’t really talk again after that.

The first gate: You are judged by King Qinguang according to the deeds of your past life. There is a golden bridge to paradise, and presumably reincarnation.

The second court: For deposit stealers, incompetent physicians and matchmakers. There are beatings and starvation, dropping in a volcano and made to swim in a river of lava, and subjection to extreme cold.  For gossip, tongue pierced. For stealing, kneeling on steel granules.

The fifth court: The mountain of knives. For those who have plotted or committed crimes for money (including murder), or if they were a money lender charging exorbitant rates, or for cruelty to animals and friends.

The sixth court: A tree of knives, for those who cheat, curse, or abduct. And for the misuse of books, for possessing pornographic material, breaking written rules or wasting food, abusing animals, they are sawn in half.

The seventh court: Torn apart by dogs for rebelling against authority; tongue pulled out for spreading false rumours; A pot of boiling water for using drugs and causing quarrels.

The eighth court: For committing crimes against Confucianism and operating houses for immoral purposes, crushing under carriage wheels, slicing, disembowelment, lightning strikes, the cutting off of limbs and tongues.

The tenth court: The final judgement, and the decision of rebirth, by the President.

Do I know who the President and King Qinguang are? I do not. Am I petrified of them? Of course not. The point of these hells to make you scared of yourself.

I am 10 when I first encounter Haw Par Villa. We might not be very practicing, but we’re still practicing, and though the rest fades, I can see the hells of Haw Par Villa behind my eyes at random moments: in the flash of a knife in the kitchen light; in the face of a temple guardian; in between the lines of an article talking about the Catholic Pope.

My father was raised in a Methodist family; his father was a Methodist minister. My mother, born a Buddhist and raised Daoist, converted to Christianity in the long heat of the Penang tropics, drawn in by friends and ice cream. They take me to church and I learn my prayers; I love most the songs of the Uniting Church, sounding like armies and discords in my ears.

But still, there is the bagua on the front door, to stop the bad spirits from filtering into the house in the cul de sac. And still, we clean the house before Chinese New Year, and don’t do any cleaning for the first two days so we don’t let the good luck flow away. Still, there’s no black in the new year and no hair cutting or washing for the first two days. And still, there’s the orange I place before my Grandmother’s photo in the Eighth Month, to keep her going.

I am 10, and I don’t know where we are. Singapore is new to me, and my cousins are at school. I’m wearing a giant shirt with a counterfeit Mickey Mouse on it, hot off the streets of Penang, proudly purchased by my grandmother. Mickey is pink.

Mum hustles us out the door. “I’ve never been,” she says, and that’s all I know.

There are other people milling around when we arrive. They’re all Chinese, too. This doesn’t strike me until later, but here, now, I don’t question it.

The snake looms over the gate. We move towards the Gates of Hell, and though it is my first glimpse, it is not my last.

Here is what Haw Par Villa looks like, late on a weekday afternoon:

After 77 years, the harbingers are peeling. There has been paint and rebranding, but the pools are shallow and the walls of hell are fading in Singapore’s sun.

I have lunch with my aunt, and when she asks me where I want to go, she blanches.

“Why go there?” she asks. It’s tacky and ugly and an embarrassment. It’s for little kids, she tries, when I insist.

I want to go. It was scary when I was 10, and embarrassing when I was 16. I’m 26, with straight long black hair and a propensity for flowing white clothes. I’m 26 and haunted, and I need to know. “I need to see it,” I say, and she doesn’t try again.

She drops me off at the front; refuses to stay.

The ticket line is empty, and I walk straight through.

The Haw Brothers, concerned about Us Kids, didn’t leave us at the back gates of Hell.

The crabs with human heads.

The mermaids. I have feelings about the mermaids, with their fish tails and their naked, breasted bodies and human heads. We’ve Lady White Snake (also found within the park), with her snake tail and her human torso, but these mermaids are something different. I’ve long wondered if they’ve been influenced by European mermaids. Boon Haw would never have stood for such a bastardisation, despite being in Singapore: it must be an addition of the revitalisation, of the nephew who wanted to grow the park.

Boon Haw was a fucking show off, in grand Chinese tradition. He built it for Us Kids, sure, but he built it for his brother, mostly. He built a villa at the top for them to live in, and embedded lots of notes about how family is the most important thing. He called it Haw Par Villa, Haw for tiger and Paw for leopard, for themselves and their company.

I don’t remember its MRT station or its address, or whether the water runs. No wonder; I last left Haw Par Villa six years ago.

But it hasn’t left me.

When the Park first opened as a theme park, strange things began to happen after sunset. The bodies of stray cats and dogs would be found near the park’s entrance. Officials called for reports to be dropped, so as not to scare away tourists.

One moonless night, a guard was patrolling near the entrance when he heard a pack of dogs barking. He approached the front entrance, torch held high (though it was so dark, with no moon, that he couldn’t see very far). He was shaking very much, and he was scared of the maulings that had taken place, of the carcasses that had been found. As he reached the gate, the dogs began to whimper in fear; in the distance, reflected in his dim torchlight, he saw the gigantic tail of a snake slithering away. On closer inspection, the giant serpent statue found in the diorama of the entrance was missing!

The guard resigned the next day, and the reports of statues coming to life continues.

Haw Par Villa is haunted. I hope you’re not surprised. People have heard screams from the Courts of Hell at night as the souls in there go through the courts. Within the park there is a hill where, for years, old statues were dumped and left to rot. There are reports that the statues are dead humans in wax, and that guards leave offerings of food and cigarettes in front of certain statues.

I move into a new apartment, and I scrutinise the flow from the front door to the back. I hang a bagua by the entry, and I think about the wrongs I’ve committed.

I close my eyes, and think about my qi, instead of focusing on my wrongs.

I am 32, and I don’t believe Haw Par Villa contains the Gates to Hell.

I’m not religious, and I don’t believe in the Gates to Hell.

But I think about it.

All photographs taken by Grant Watson. 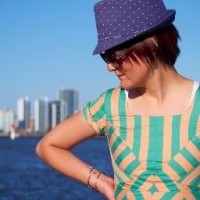 Stephanie Lai is a queer Australian of Chinese descent (and a left-handed archer); she is occasionally paid to train people in surviving our oncoming dystopic climate change future. Find her at yiduiqie.tumblr.com and no-award.net.