How To Tell If You Are A Mitford Sister

You grow up in a family that is aristocratic, but on such a limited budget as to be able to employ no more than a cook, a parlor-maid, a housemaid, a kitchen maid, a nanny and a nursemaid. The family pays for the nanny by keeping a flock of several hundred chickens and selling the eggs in town. Other budgeting measures include an absolute ban on the use of dinner napkins.

You spend hours in the chicken house learning to do an exact imitation of a hen’s expression when it lays an egg.

Your father is hilariously witty, but prone to frightening rages. You participate in the favorite family game of “child hunt,” in which the children run and hide in the fields, until caught by the hound.

Later, your father bitterly denounces all of your male friends as “damned puppies” and “young swine.” Once, he picks up an admirer and shakes him like a rat. When you dare to wear trousers at home, your father becomes apoplectic with rage. You nickname your father the Feudal Remnant.

Your mother does not allow any vaccinations or medicine of any kind; bedroom windows must always be kept open six inches, even in the dead of winter. Although you are very near-sighted, your mother forbids glasses, saying that your body will heal itself, and “you’ll probably be able to see more as time goes on.”

Your uncle writes letters to the paper expounding his theory that England’s decline is due to a reduction in the use of manure in farming.

Your father determines to improve the family fortunes by gold mining in Canada, and the family lives for a time in a small cabin in a Canadian town called Swastika, never finding gold. Your middle name is actually Valkyrie.

You and some of your sisters declare yourselves members of the Society of Hons, dedicated to opposition of the Society of Counter-Hons, led by your terrible brother Tom (whom you all actually adore). The Hons and Counter-Hons fight with toy spears. You spend hours together in the linen closet creating Society rules, and speak in a private invented language, Boudledidge, that allows you to sing obscene songs in front of the adults.

You are known as Queen of the Teasers. Even as a young girl, your wit is likened to a barbed hook hidden within the feathers of a fishing lure. You enjoy composing cruel poems to make your sisters cry. A favorite insult: “You look like the eldest and ugliest of the Bronte sisters today.”

Your closest companion is a pet lamb named Miranda that you bring with you to church and to bed. You write a poem about her that includes the rhyme “Me-ran-der/ Soon to the butcher I must hand her.”

After an emergency appendectomy, you sell your sister your appendix in a bottle, for one pound. It soon smells so much that Nanny must wash it down the loo.

You are legendarily beautiful. When your incredibly wealthy fiancé introduces you to his mother, he declares, “And she can cook, Mummy,” to which she replies faintly, “I’ve never heard of such a thing. It’s too clever.” But in reality, you can make nothing other than fried eggs.

By age 15, you have become fascinated by Fascism (you later become a close confidante of Adolf Hitler).

By age 15, you are a Socialist (you later become a famous left-wing activist and muckraking journalist).

You have always voted Conservative and would never do otherwise.

The drawing room is divided down the middle, one side decorated with swastikas and photos of Mussolini, the other side with a bust of Lenin, the hammer and sickle, and copies of the Daily Worker. You imagine what it would be like to have to give the order to execute your sister.

As a debutante, you bring your pet white rat, Ratular, and your grass snake, Enid, to dances, and sit stroking them, intimidating all the young men. If a party becomes dull, you allow one to escape.

If someone upsets you during a meal, you slide silently to the floor and remain under the table, reappearing only when you think the episode will have been forgotten.

You are deeply oppressed by the thick fog of deadly boredom that surrounds you at home. Since your mother believes in the Loch Ness monster, you hatch a plan for escape: travel to Loch Ness, leave a suicide note, and flee; it will be assumed the monster ate your body.

You are fascinated by a rebellious second cousin, Winston Churchill’s nephew, who has joined the International Brigade fighting fascism in Spain. At age 19, after meeting him at a family event, having spent only a few hours together, you elope with him to Spain, where you work together as Loyalist journalists.

Back home, on a United Front anti-Fascist march in London, you are attacked by Blackshirt thugs with rubber truncheons. You see a familiar sight: two of your blond sisters, waving swastika flags. You shake your fist at them in the Red Front salute.

You seriously consider pretending to convert to Fascism, going with your sister to meet Hitler, and “whipping out a pistol” to assassinate him. Later you bitterly regret your lack of courage in failing to go through with this plan.

You become a close personal confidante – and, it is always rumored, the lover – of Adolf Hitler; the two of you share private jokes and “giggle uncontrollably” together. Hitler gives you a flat in Munich previously owned by a young Jewish couple “who were going abroad.” You are arrested in Prague for distributing Nazi propaganda. On holiday in Spain, you are attacked by crowds who are enraged by your swastika brooch. After the war begins, you attempt suicide by gunshot to the head (using a pistol provided to you by Hitler, for safety) and never fully recover.

Although you married one of the richest men in England, you begin an affair with the leader of the British Union of Fascists, whom you later marry. When Britain enters World War Two, you are both arrested for having fraternized with and encouraged Hitler and the Nazi party. You spend over three years in jail, apart from your young children. You always say that you only had England’s safety in mind.

Your autobiographical fiction makes you a world-famous author, living in style in Paris and dressing in couture. Your life is somewhat tragic, however, because you never stop pining for your unfaithful lover, an acne-scarred but charming French diplomat.

Your exposé leads to lasting reform of the U.S. funeral industry.

No family member ever calls you by your actual name. You and your sisters often address one another in letters as “Susan,” for some reason.

You become the Duchess of Devonshire, overseeing the 1,704,233 cubic feet of Chatsworth House. Of the home’s 297 rooms, 48 are admittedly very large, but some are “no more than glorified cupboards.”

Your father disowns you and leaves you no share of the family island in Scotland, because you have declared your intention to leave your portion of it to the Communist Party. You, however, buy out your sisters and take possession of the island.

You become dear friends with Maya Angelou. On your deathbed, she comes to visit every night, and sings you bawdy and romantic songs.

You do not speak to your Fascist sister for decades.

You do not speak to your Communist sister for decades.

Your mother observes, “Whenever I see a headline beginning with ‘Peer’s Daughter’ I know one of you children has been in trouble.”

If you are still not certain whether or not you are a Mitford sister, you might try these for more guidance: Jessica Mitford, Hons and Rebels; Mary S. Lovell, The Sisters: the Saga of the Mitford Family; Deborah Mitford, Wait for Me!: Memoirs. 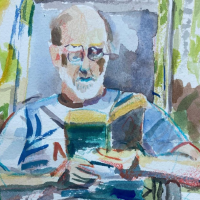 Ivan Kreilkamp teaches in the Department of English at Indiana University and writes frequently about 19th-century and contemporary literature.