Stranger who commutes on the same bus as you

College classmate you pass on the street and blatantly ignore

Person who talks to you while you’re waiting in line

Person whose name you know before you formally meet them

Friend of a friend you drunkenly added on Facebook

Person you refer to as “my friend” when telling stories but is actually someone you follow on Twitter who doesn’t know you exist but it feels like you guys would be friends, you know?

Your friend’s older sibling who you’ve known since you were eight and who is now your peer until they get frustrated; then they are a Cool Teenager again and you are an Annoying Child

That Condescending Asshole. Doesn’t matter which one.

Stranger who witnesses someone slight you and then makes knowing, what the fuck?! eye contact with you afterwards

People you will allow to take food off of your plate

People you will unapologetically fart in front of

Former coworker who clearly does not remember your name

Stranger whose dog you really want to pet 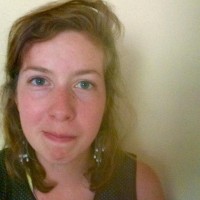 Ella Kampelman is a visual artist living in Minneapolis, MN. She promises none of these are about you.